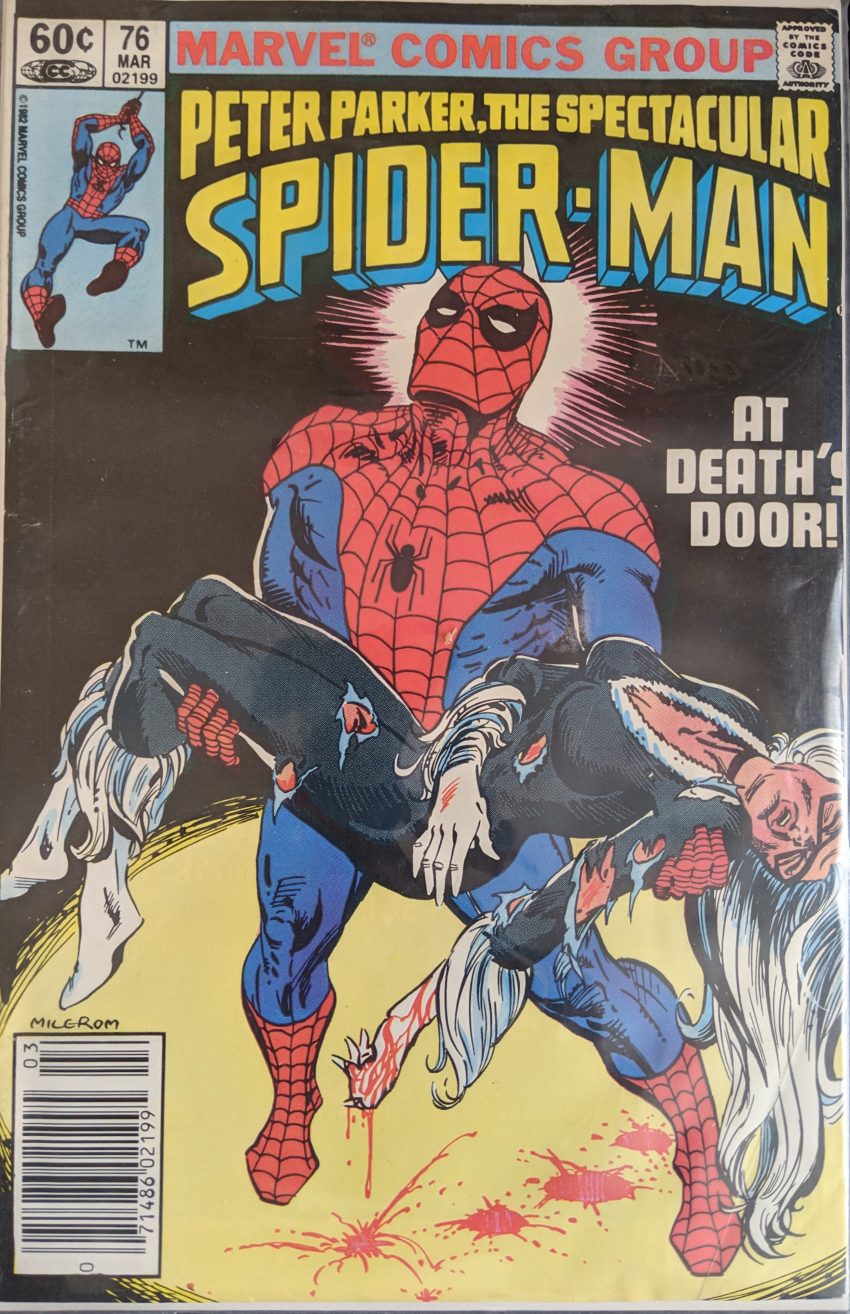 That’s an unusual amount of blood for a comic of this vintage! The difference between Milgrom’s full-service covers and interior pencils in this era is pretty striking. Prior to this, Black Cat has only appeared in 2-part stories that end with her ”dying” or, one time, being committed to a mental institution. As crazy as that is to type. This is her first-ever 3rd issue in a row, but will she make it to 4?? We’ll see. Spidey & Black Cat are still making out even though Felicia is, like, dying, because I don’t know, but then dozens of projectiles start raining on them.

Seriously, what are these guys paid that they’re not all running for it right now? Doc Ock, maybe Spider-Man’s most dangerous enemy, is lying on the floor with his arms ripped off, and you’re like, “Maybe so, but I got this stick!” No, sir. If that’s me, I’m going to apply for a job at Walmart. Also: Why sticks? Ock & Owl couldn’t afford guns? Like a hundred goons in here and not a gun to be had. How did they think this would go? Anyway, Spidey just webs up the whole lot of them in one move, which seems pretty impossible, but I just saw it happen. Felicia is totally jazzed he’s sticking up for her, but then Doc Ock’s surprisingly short tentacles start flailing toward her, mimicking the extreme pain their owner is in right now. But they’re not after her, they’ve still after the detonator for the bomb. Far less injured that she seemed last issue, Felicia leaps into action. She just destroys the detonator. Pretty quick. Doc Ock doesn’t like that at all, and pins her to the wall with his phantom limbs. And then… I guess some of the goons found some guns…

Come on, man. I mean… what? You just perforated Felicia, which is pretty gross, first of all, and you frame it as something happening to Spider-Man, which is even more gross, and THEN you give her a goofy line after? Well, in typical bad media written by a lame dude fashion, now that the hero’s lady has been hurt, nothing can stop him as he rampages through the room, taking out all the goons, webbing up Ock’s arms and throwing them out the window into the ocean. Ugh. He grabs up Felicia, and we’re told his Spider Sense leads him out of the maze-like lair, even though that’s not how it works, and soon he’s somehow gonna swing across the river to a hospital, but I submit to you: how?

He does, though, I guess by flying, and he gets her to an emergency room. They rush her into an operating theater and he can’t watch as they prepare to cut her open.

And so a haggard Peter Parker rushes into the classroom moments before the test is to begin, and is the last one to finish it. After, he rushes out, his various college pals asking him to go to lunch, but he pays no attention. Dr. Sloan is in the hall, asking how he thinks he did, but he says right now, he couldn’t care less. I mean if that were true, why show up at all, but ok. Switching to Spidey, he swings back to the hospital, where he runs into Jean DeWolff in the hall. She heard all about what happened from one of The Owl’s captured henchmen, and offers Spidey a folder.

We’re told that, as Spidey runs to Felicia’s room, Jean DeWolff is so happy for him that she begins to “laugh so hard… she cries,” which is, again, super weird, but he gets to her room. She’s sedated, so he can’t talk to her. Naturally, he does the usual “all my power and I can’t save the ones I love” thing, it’s his go-to, and that wakes her up.

Meanwhile, at an unnamed location, Doc Ock is already getting his tentacles reattached. Somehow. Somebody already found them at the bottom of the river? Did they just squirm on out on his command? I dunno. At any rate, he’s refusing anesthetic during this extremely painful procedure, saying he wants to know how Spider-Man & The Black Cat will feel when he tears them limb from limb. So… look forward to that. This story continues for 3 more issues, but this seems like a place it can finally break to allow another title to exist. Good thing, too, ‘cuz our next post is a major issue of ASM.