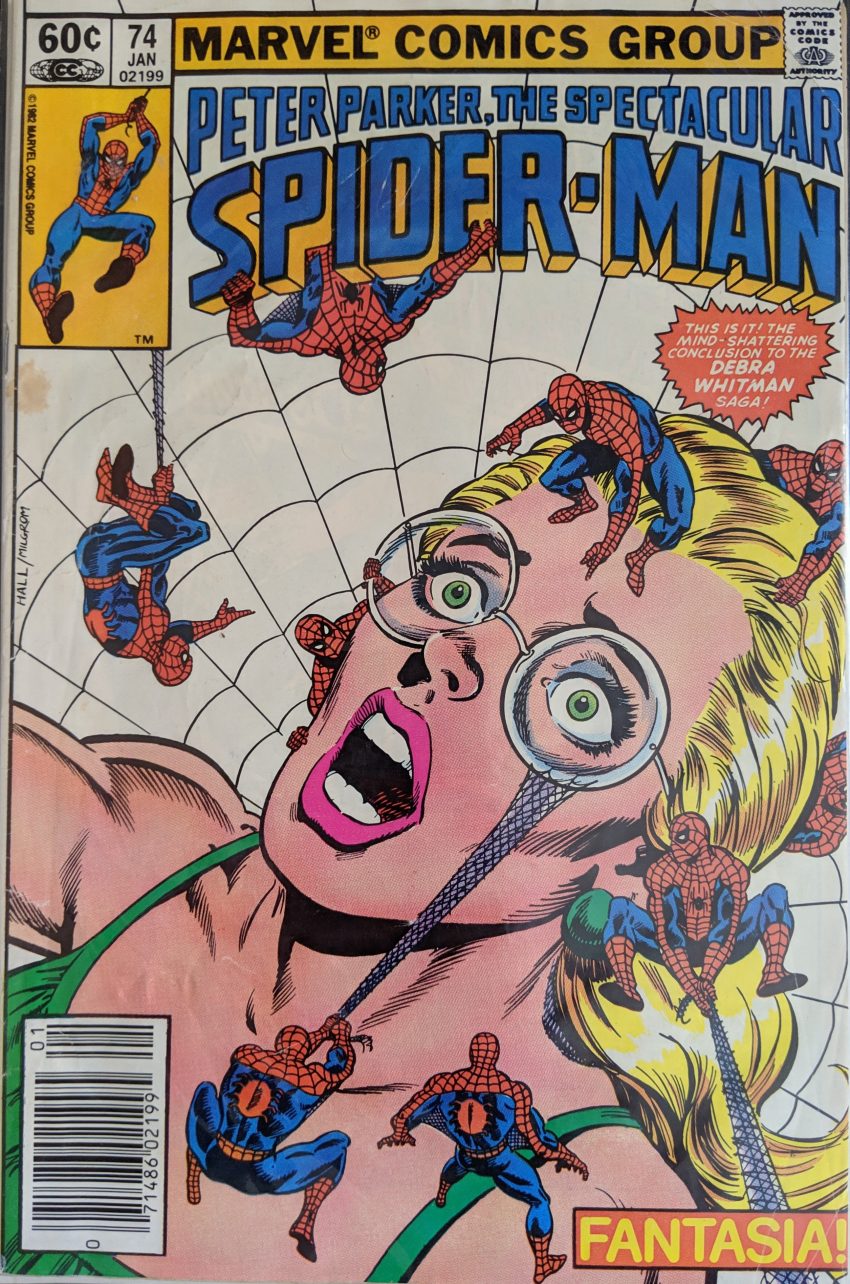 Pretty striking cover by Bob Hall. Peter horribly mistreating Deb is a saga! Who knew? Peter has been treating her like crap for over 4 years now, “and it’s all been leading to this!” I guess? Doesn’t feel like it was a plan… Anyway, let’s see how it goes. Bob Hall pencils the interiors, too, not that you could tell much of a difference with Jim Mooney inking. We begin with a visual depiction of Deb’s recurring nightmare of Peter sans mask in his Spidey suit, fighting goons as she fears for his life.

Some bedside manner, this guy. Also, what happened to BIFF RIFKIN? This feels abrupt, and I suspect it was. At any rate, this concludes Deb’s session, and she leaves asserting that Peter has exhibited incredible strength on multiple occasions and is always around to take pictures when Spider-Man does anything, and therefore, is Spider-Man. Poor Deb. When she leaves, her doctor opens a door to another room and asks Peter if he heard all that.

Is there a less appealing trope that a person in a piece of media saying “This isn’t [that kind of media]!” Not a favorite. Peter giving himself the out Deb thinking he’s Spider-Man somehow might not be related to him being Spider-Man is ridiculous.

Hey, look, The Black Cat isn’t dead! What a shock!  As he swings, Spidey stumbles on Doc Ock’s goons fighting The Owl’s goons in a nuclear research center. That sure sounds like a recipe for disaster. He decides he has to dive in.

I kinda miss the days of the matching outfit goons. Thoroughly silly, but still fun. He makes short work of the goons, but then The Owl swoops in and steals whatever they were fighting over, gets in a helicopter and leaves. Fresh out of leads, Spidey goes to school.

BIIIIIFF RIFKIN! Not out of the picture quite yet. Serious retconning going on here. Dr. Sloan wishes Peter would worry as much about his grades as he departs. Meanwhile, Doc Ock is at Kingpin’s office to… I don’t know, really. Kingpin asks why he should team up with Ock, implying that that’s what they were talking about, but then Doc Ock tells him he doesn’t need him.

(taking candy from a baby) Kingpin reveals Ock actually stole a fake whatever-that-was, but then the lights go out and it’s implied but not shown that Black Cat steals the real one. A lot going on. Elsewhere, Spidey arrives at the health spa BIFF RIFKIN works at, and switches to Peter to ask him about Deb.

Well, that’s just a delightful backstory. Poor Deb Whitman. In the ensuing struggle, Ock’s thingie is shattered, revealing it to be a fake. He smashes Owl into a crate and storms out, The Owl monologing about how he’ll be ready for Ock next time. Spidey, meanwhile, has arrived at Deb’s place, where he sees her talking to her stuffed animals again (Maybe that hasn’t been on the blog yet, I dunno, but she does it!). He manages to link not knowing about her problems to not helping all the dead people in his life, his favorite, and then…

Uh… ok…? What a swerve, eh? The next day, Peter sees her to the bus terminal, where she is heading back out to The Midwest to confront her past. She says it’s the only way to face her future. They share a kiss and she’s gone. Peter thinks about how crazy all this has been, and how he needs to get home to study and can’t let anything else distract him. So, naturally…

She’s back, and she’s got the thingie in the middle of a gang war! More on that next issue, naturally. So, wow, huh? What a bizarre ending to the “saga” of Deb Whitman. With that, Deb was never seen again… until 2007 when, after Spider-Man had unmasked to the world, she wrote a book called “Two Faced: How Spider-Man Ruined My Life.” I didn’t read that story or even know it existed until recently, but now I kinda want to. Such a strange chapter in the Spidey mythos. Was it always the plan that he would walk all over her all the time? What was the goal with her? I suppose I’ll never know.