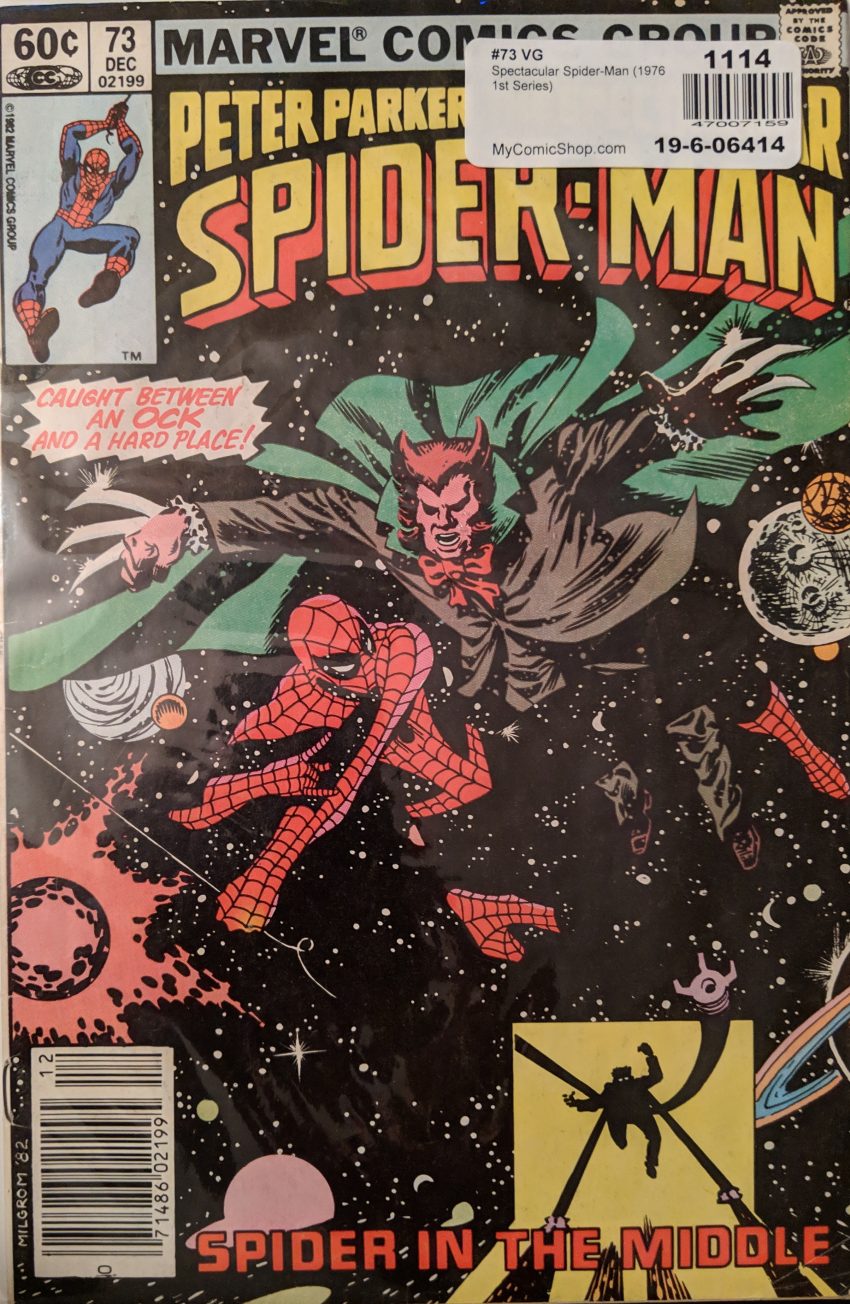 This cover reminds me of TAC 51. Not really the same, but both have Spidey throwing down in space. As is the case surprisingly often, TAC has decided to just go off on its own for awhile, leaving little to no space for the other titles to occur, so it’s bunched up here for awhile. It’s chaos from page one in this one.

Whoa, whoa, whoa! This is entirely too fast! Al Milgrom takes the penciling job as this crazy scene unfolds.

This is a lot of info about poor Deb all of a sudden. Can you imagine this scene in real life? Some random schmuck comes to your house before the sun comes up and dramatically accuses you of being Spider-Man? And he’s right? But, don’t worry, he doesn’t mean it. And he’s trying to tell us Deb is the one who has mental problems? He’s barely out the door when the phone rings. It’s Robbie at The Bugle, offering Pete the job to go photograph Boomerang appearing before the grand jury after being caught by Spidey in TAC 67. Peter thinks this will help him “get his mind off Deb Whitman’s problems” as he suits up as Spidey and swings away. Real compassionate guy, our man. As the sun comes up, noted Daredevil foe The Owl tells his goons to bring him Boomerang, so that’ll get us to the fight on the cover, I guess. Spidey arrives at the courthouse, internal monologuing how grand juries work in case you don’t know, and he runs in to Ben Urich, also there to cover Boomerang. Peter’s Spider Sense is set off by 3 obvious goons in the lobby, while inside the courtroom…

DA Tower tattles Boomerang by saying he’ll never be as good as Bullseye, and then Boomerang says he’s every bit as good as Bullseye and throws the pen he’s been toying with (Who in the world let him have that?), bouncing it all over the room and hitting Tower and one of the guards with it.

“I am a master of precision throwing” is a totally natural sentence you can totally hear someone saying. You ever play the original Resident Evil, with its famously bad dialogue and voice acting? “Jill, you should take this lockpick, since you are the MASTER of unlocking!” That’s what this sounds like. Boomerang takes the judge hostage and a guy fleeing the courtroom says he’s escaping, prompting Peter Parker to say, out loud, “Not if I can help it!” as he ducks into the men’s room, which is super smart of him, and thus…

I completely reject this page. He’d need superhuman strength to do this, he doesn’t have any; He’s just a master of precision throwing. Boomerang then finds himself in a fistfight with Spidey, and that lasts about 3 seconds, as it should. Spidey webs him back into his chair and tells the assembled they can continue their hearing, but most of them are as scared of him as they are of Fred, so he dejectedly leaves. The usual hero’s welcome. As he switches to Peter Parker and retrieves his camera, the 3 goons set off his danger sense again, so he puts a tracer in one of their jackets, and hours later, follows that tracer to the American Museum of Natural History, where he finds an unconscious security guard, and that leads him to The Owl, lording it over his goons. This is his base? A very popular museum? What sense does that make? He’s sitting on a trapeze hanging from the ceiling in some kind of bird exhibit, this is ridiculous.

Spidey realizes this situation isn’t really in his favor and ducks out, getting them all to chase him into the planetarium. He’s noted they maneuver just fine in the dark, and must have infrared goggles on, so he fires up the planetarium to even the odds.

Ah, yes, the famous nightwinds inside the Hayden Planetarium. Owl attacks Spider-Man, who once again talks about his Spider Sense even though Roger Stern is desperately trying to make it a secret, while something pretty funny happens right outside:

Why did he say that part out loud? Like any reasonable person, Spidey’s far more worried about Doc Ock than The Owl, so he hides in a dinosaur skeleton to surprise The Owl and finish him quickly, but that plan doesn’t really work, and both The Owl and Doc Ock escape. Spidey’s left with nothing to do but go home.

Seems like Peter’s gonna do the right thing after all, huh? Well… don’t get too excited…