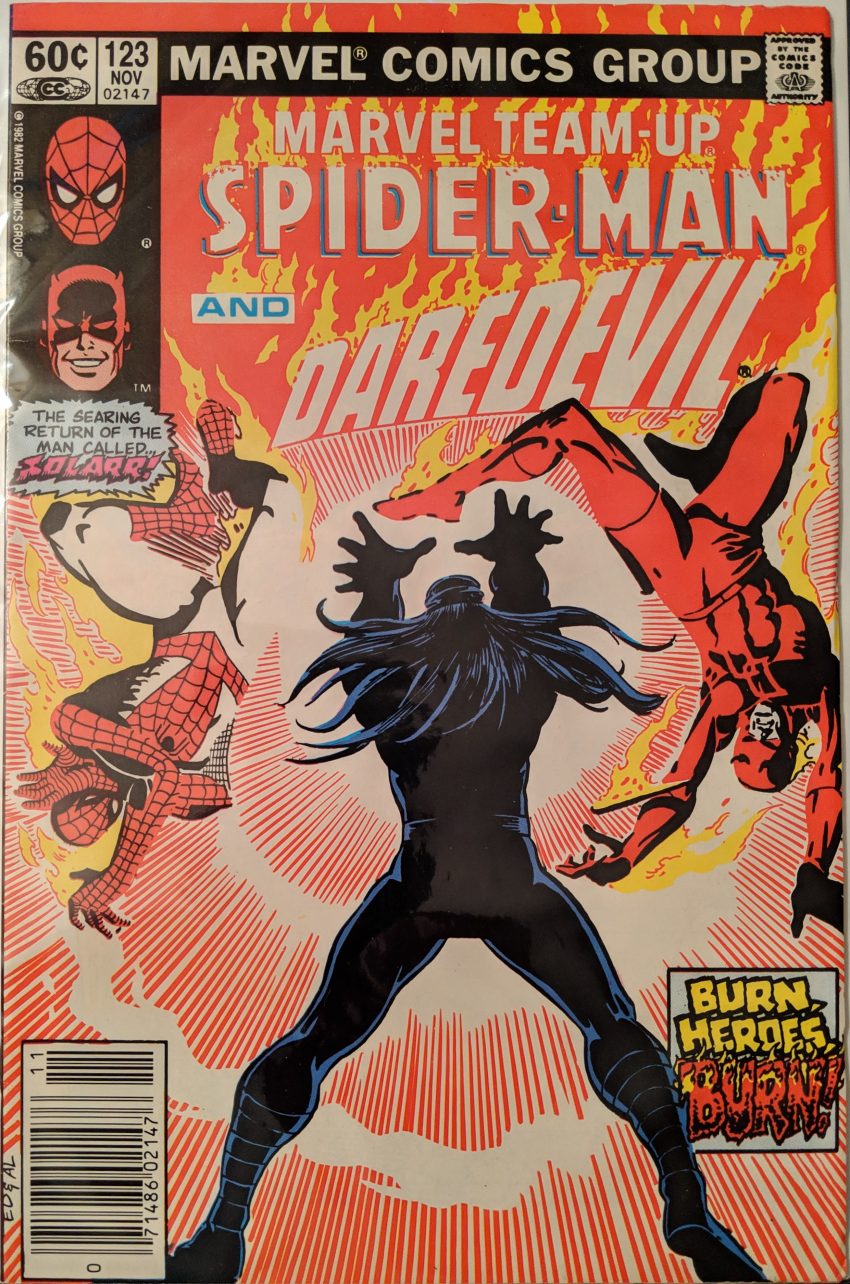 Time for part 2 of this Team-Up mini-epic, which is called “Rivers of Blood,” so you know, probably a real lighthearted romp. In the wake of last issue, Spider-Man has been rushed to a hospital, unconscious, and is in the care of Doctor Claire Temple, who you may know from Rosario Dawson’s portrayal on all the Marvel Netflix shows.

Claire says not if she can help it. The mother says he was home alone when a 13-year old kid broke in to rob the house and stabbed him. Everyone wonders what kind of world they live in for this to happen as the kid is wheeled away. Claire orders Spidey back to bed.

That didn’t take long. Matt’s in the hospital to see a hitman called “Peepers” Scanlon who’s had a change of heart, and got shot up for wanting to rat on his bosses. Spidey’s heard of the guy. They part ways and Matt internal monologues about his powers in case you’re not familiar as Solarr — Spawn of the Sun comes racing toward the hospital to kill “Peepers”. This goofy looking superhippie started out in Captain America before running afoul of The Avengers, The Defenders, and most recently, The Thing and various others in The Thing’s own monthly team-up book, Marvel Two-In-One. Having escaped imprisonment in Project Pegasus, Solarr is looking to rebuild his rep, and this gig is the beginning (Did he have a rep to lose?). In the hospital, we check in with Matt Murdock and “Peepers,” who says a man can’t just wipe out of a life of crime.

Elsewhere, Mickey, the kid who got stabbed, is taking all this way better than his Mom, saying it’ll be kinda fun to stay in the hospital and “go exploring” (Not sure that’s allowed, Mickey) when a certain super-patient stops by to entertain.

This kid’s name was Mickey at the top of the page, and yet Spidey calls him Joey down here.

Spidey’s danger sense is set off by some maintenance men, who of course try to kill “Peepers’s” security detail. Matt’s trying to think of a way to slip away and become Daredevil, but, lucky for everybody, Spider-Man is on the case.

Everything seems ok for a second, but then Solarr crashes through the wall, saying he’ll cook “Peepers” where he stands. Elsewhere, we learn that Mickey has run off to try to see Spidey in action, and in the process, torn his stitches, and doesn’t seem to know he’s bleeding. That seems bad. Upstairs, Solarr is just standing there laughing at the idea of a blind man trying to protect his prey, and Matt is being surprisingly physical…

Solarr is excited by what taking out Spidey will do to his rep (The hubris!) and manages to burn Spidey’s back in the scuffle. Spidey makes with the banter to distract him, but it’s not working. Lucky for him, everyone stopped paying attention to Matt Murdock.

The heroes lure him away from “Peepers,” and when DD senses Mickey on the same floor, he shoots Solarr with a fire extinguisher, which forces him outside, since he relies on the sun for his powers, apparently. Spidey and DD give chase, “Peepers” worrying and Mickey loving it. Solarr is able to make some kind of “mirage” of himself that DD sees through but Spidey does not, and the already very injured Spider-Man dives through it into a wall, almost knocking himself out. DD bails him out and causes Solarr to go smashing through a billboard, buying them a few minutes, but back at the hospital, things have gone pear-shaped.

Spidey is shocked to see DD fleeing the scene, but it’s because he’s heard what’s going on back at the hospital and has to try to save Mickey. And “Peepers,” for that matter. Solarr is really giving Spidey a challenge in his current state as DD makes it to the hospital to find “Peepers” and Mickey coming out the front door.

More than somewhat on the nose, there, DeMatteis. But at least that went ok. Back at the fight, Spidey is barely keeping ahead of Solarr’s blasts when he spots one of his best friends, a water tower, and tricks the superhippie into zapping it and dousing himself.

And that’s that. Another maudlin ending. The DeMatteis special! I hope Mickey got his stitches fixed. At any rate, next post will be still more Team-Up, as we continue catching up to that ASM 4-parter.