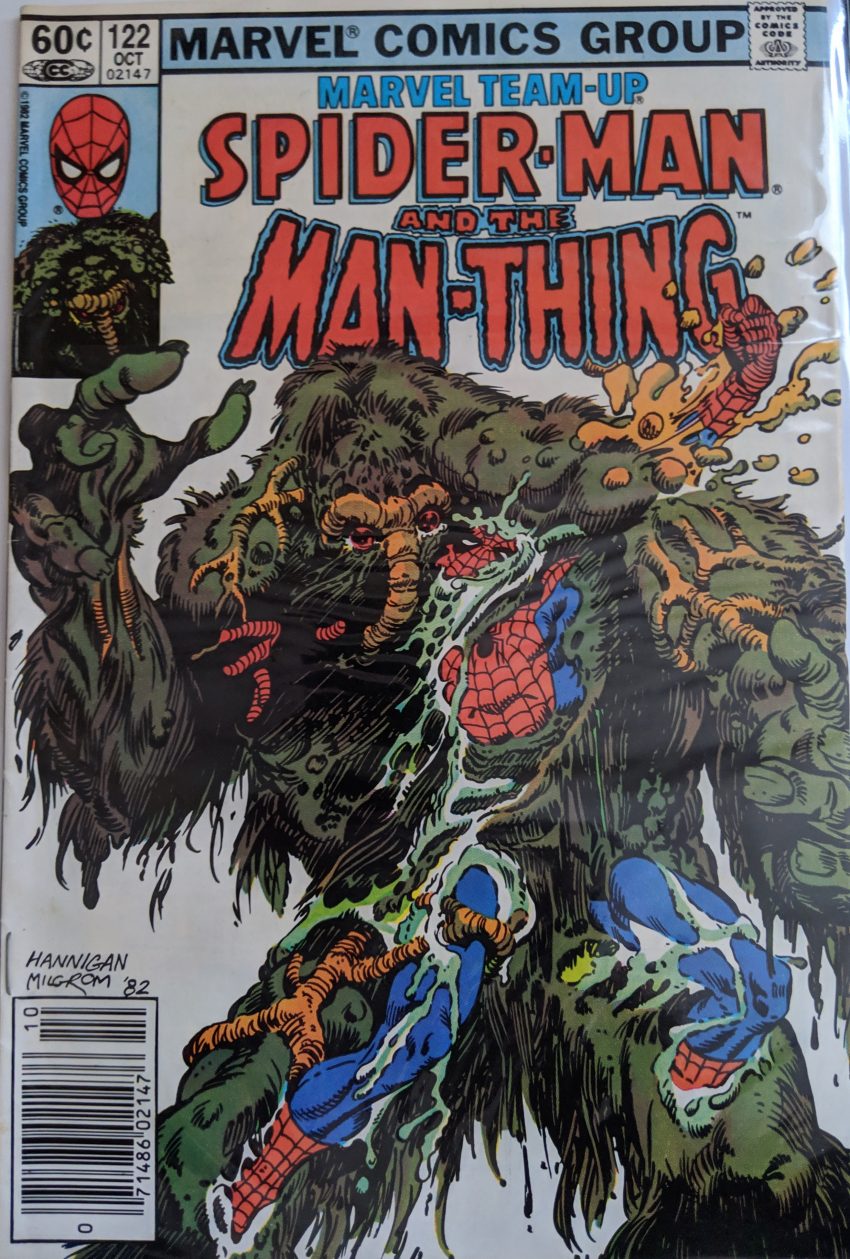 That’s right, the shambling swamp is back! Except due to my weird posting schedule, I’ve read his previous appearance in MTU 68, but not yet posted about it. That’s frustrating. At any rate, we’re back in the era where JM DeMatteis was writing, Kerry Gammil was drawing & Mike Esposito was inking. Man-Thing is wandering in the Florida swamp as he always does, surrounded on all sides by a ton of purple prose by DeMatteis. Kind of a holdover from the 70s, this much text all over a page. This bit of swamp is, improbably, “the nexus of all realities,” so interdimensional craziness is always happening around The Man-Thing, and today is no different, with a disheveled dude looking like an old school magician stepping through a tear in reality to walk into the swamp.

So much text! The guy says his name is Fate (First name? Last name?) and launches right into his life story. Turns out he’s a villain from DeMatteis’ Defenders run (That just keeps spilling over into this book). He was a reporter whose family was killed by gangsters because of his work, so he did what anyone would do and learned “the dark arts” and became a supervillain. The guy who killed his family is apparently the super-person called Devil-Slayer, he and The Defenders fought this guy, this guy lost, as you might expect. He was put under psychiatric care by Dr. Strange, and how now broken loose.

I guess you gotta aim high when you’re a crazy sorcerer. Meanwhile in New York, inspired by the events of last issue (Remember that?), Peter has been doing a photo series on the elderly, about people who don’t have a support network living an increasingly isolated life as they age. Robbie’s into it, JJJ is… JJJ. He stomps in and talks about how he hates poetry, snatching the photos out of Pete’s hand.

Who knew? Peter’s so lost in thought he walks into traffic, executing an amazing triple-flip to avoid getting hit, and then trying to play it off as “the benefits of joining a health spa” to onlookers before running off.

A MITE SUSPICIOUS, you say. Just a LITTLE BIT. He notices the SLIGHTLY SUSPICIOUS big guy is leaving a slime trail and runs into a restaurant to become Spider-Man. Meanwhile, “Fate” and Man-Thing are in The Bugle, the former hoping to see JJJ. And he does…

This was a great plan! What could possibly go wrong? As you may know, “whoever knows fear burns at the touch of The Man-Thing.” This bizarre and difficult to measure metric is, like, his entire thing. He’s drawn to fear. So The Daily Bugle city room has just become the craziest place in the world for Man-Thing. Fate… freezes everyone in time except him, JJJ & Man-Thing… so they can talk… I can’t with this. Spider-Man crawls up the side of the building just now, so he sees the next bit. Fate says the world is full of suffering and it sucks and tells JJJ he wants him to use the paper to “encourage people to be decent to each other.” JJJ rightly says he can’t fix that with a newspaper. How does Fate react?

This is ridiculous. Spidey starts trying to fight magic with his web, which works about as well as you’d expect. Then while ol’ dude is babbling about whatever he’s babbling about…

Things fall apart quickly. Spidey starts trying to save Fate from Man-Thing, but can’t get much of a grip on the monster. JJJ sees all this happening and understandably freaks out, and his fear draws Man-Thing’s attention. Spidey dives into Manny and accidentally smashes them both right through the wall, so now they’re dropping to the street and Spidey’s hands are stuck in Man-Thing’s goopy body. He frees himself with seconds to spare, and Man-Thing explodes on the pavement.

Man-Thing starts going after the panicked crowd, Spidey tries his best to stop him but doesn’t fare too well, and back upstairs, Fate is feeling abandoned by his new friend, Man-Thing, because he is clearly not ok.

Sheesh. Man-Thing starts trying to fight the cops, Spidey does his absolute best, all the while feeling extreme pity for Man-Thing, knowing none of this is his fault, and the way Man-Thing feeds on emotions, this causes him to just kinda melt into a puddle.

Abrupt! Spidey’s in a bad place, and it sounds like this issue will continue right into the next one, so I’ll see ya there.