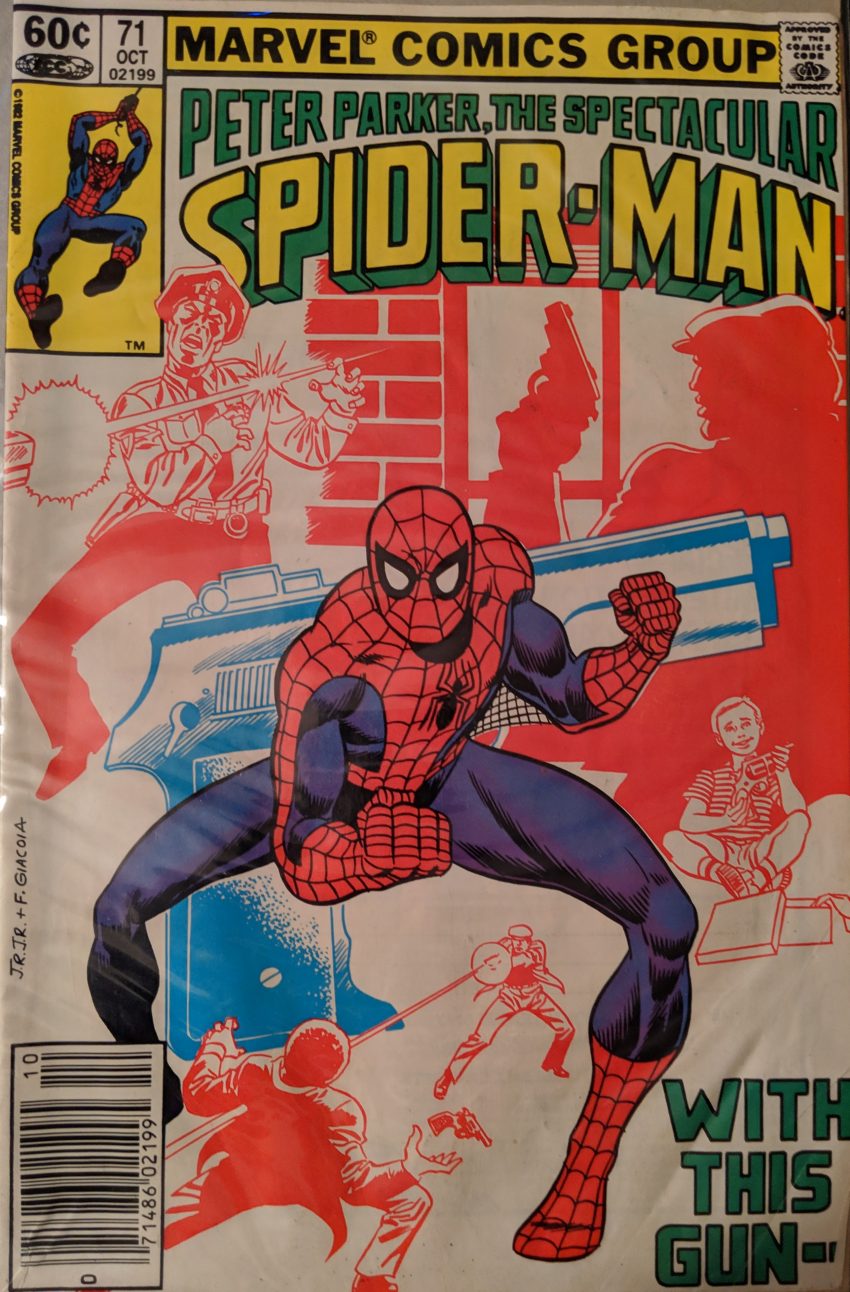 …I thee wed? I’m not sure where that copy is going. Oh, the splash says “With this gun… I thee kill!” Hilarious. Not content to just draw ASM, here’s JRJR & Frank Giacoia providing a cover for their sister title. Looks like it’s gonna be A Very Special Issue of Spectacular Spider-Man. On deck to produce it, we got Bill Mantlo writing, a welcome return to the blog by Rick Leonardi on pencils, and Jim Mooney on inks. There is also the highly unusual credit “additional dialogue by Tom Defalco,” who is the editor. So that’s odd. Spidey kicks this one off by spotting some guys robbing a corner store on a hot summer night, setting up his camera, and doing his thing.

It’s all going about how you’d expect until the store’s owner comes down from upstairs, armed and ready to defend himself. Spidey says the kid has his gun hand webbed up, but the owner keeps advancing.

Shades of MTU 140, also by Mantlo & DeFalco, hm? Now watch out, because as Peter brings his photos to The Bugle a few hours later, shaken by the event but still reporting the news, this old comic from “before writers forced their politics into comics” according to internet buffoons gets political.

Man, from the vantage of our time, I wish Robbie was right about violent crimes being less likely to be committed with a rifle. On a lighter note, Jim Mooney is doing his usual job of completely obscuring his penciler’s style. Good grief. He’s got to be basically redrawing every panel. If not for the dynamic Spider-Man figures, you’d never know Leonardi drew this. At that moment, as if on cue, a guy runs in to tell Joe about a tip that an illegal arms shipment is coming in tonight. Peter lights out of there, and soon, Spider-Man is on the case.

These guys are not messing around with their message this month. Spidey shakes some info out of that guy and then heads to the infamous Josie’s Bar from Daredevil comics, as another insert shows another shooting somewhere in the city. Some guys are discussing the gun shipment in the bar.

As Daredevil usually does, Spidey has to fight pretty much the whole bar, with an amusing bit about some one ALMOST going through the front window, but Spidey stopping them (That’s not how it goes in DD comics), and again, an inset shows another gun crime. He finally gets the info he needs, which leads him to Greenpoint, Brooklyn, to intercept the gun runners. Unfortunately for everybody, the cops show up, too, and it quickly becomes a pitched gun battle.

Spidey jumps in, taking out a few guys before realizing all the guns are coming from the boat, so that’s where he should go. He uncovers an enormous arsenal, but webs everything up, including the controls to the boat, so no one can do anything with it. But then he sees a truck escaping with some of the cargo, so he cracks the mast off the ship and…

No denying who drew action sequences like that, no matter who’s inking it. Spidey rips the roof off the truck, and in a pretty crazy 2-page spread, turns it right back toward the boat, which explodes on contact, while across the bottom, more random, senseless gun incidents are depicted. As the truck and the boat sink into the harbor, Spidey tells one of the cops he’s sorry about the cop who was killed in the fighting, then swings away, upset that anyone had to die tonight.

And there you have it. Just another comic about dudes punching each other from the days before writers inserted their politics into comics, according to some of today’s unsavory types. This oe was pretty heavy-handed, but I usually appreciate writers trying to find a way into real world events in their books. Some topics work better than others, but it makes things feel more real. Anyway. I don’t have TAC 72, so get ready for an uninterrupted stretch of Team-Ups for a bit.