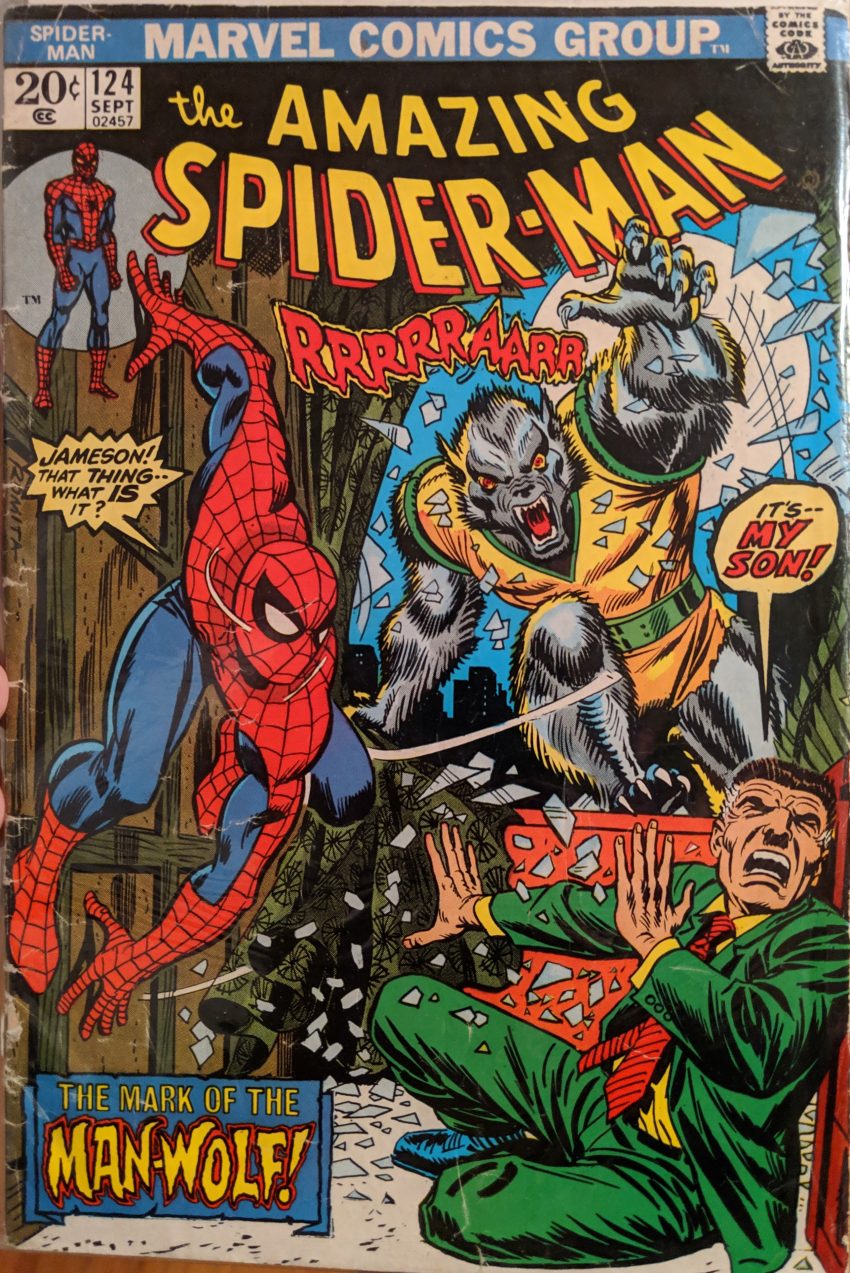 Boy, Spidey just can’t get away from werewolves! We’re told on the splash page it’s been 10 days since Gwen died, as we see Spider-Man swing by a newspaper stand on a rainy day to check the Bugle.

Meanwhile, at the offices of said paper, Joe Robertson is fighting a hopeless battle to get JJJ to stop printing all this conjecture. Jameson says he’s doing this because Osborn was his friend, but it seems clear he’s just found a great angle. Their argument is interrupted by the arrival of Jonah’s son, John.

He wants to take JJJ out to dinner to meet his fiance, Kristine Saunders. But as they leave The Bugle, it turns out not all is well…

John doesn’t turn into a werewolf just yet, but it’s only page 5, we got time. Meanwhile, Peter Parker had decided to go back to class. He’s uncomfortable with how people are looking at him, wondering about his situation, and it’s only a few minutes before it gets too uncomfortable and he bolts. Mary Jane follows him out. She once again asserts he really needs to get out. He says he’ll adjust if he can.

These two are being awfully pushy with dudes who’ve just had horrible tragedies happen 10 days ago. We jump forward in time from there, to night time at John Jameson’s place. It’s not going well.

As he begins to change, he mentions his “special suit” is supposed to prevent it, but it’s not working. I guess that’s supposed to explain his supervillain costume. It’s about as unconvincing as when they did it with Morbius. Now The Man-Wolf, John runs off into the night, leaping from rooftop to rooftop, he follows a scent until it leads to his dad. JJJ, of course, has no idea his son is a werewolf, so he just thinks some crazy monster has burst through his window. At the sametime, Peter Parker has just seen Jameson’s new anti-Spider-Man editorial, and he’s losin’ it.

He changes to Spidey and swings off, ready to get revenge on JJJ, but his rage is already subsiding when he reaches his destination just in time to see a werewolf smash through the window. Thus, it’s fightin’ time.

Talking sort of to Jonah but almost to himself as they brawl, Spidey rambles about how he wouldn’t have believed a werewolf last month, but this is his second in a week, and also talks about how he’s suddenly in a pretty good mood.

Spidey goes down, and JJJ tries to call the cops, but the monster stops him… and just stares at him. JJJ tries to plead with him, but then sees the gem around his neck, the same one John was wearing, and realizes what’s happening. JJJ gets the feeling the creature has come to him for help. But then it bounds back out the window right as Spidey is coming to.

That’s definitely better than explaining the situation to someone with monster experience. Spidey leaves, and we follow Man-Wolf for awhile, leaping around the city, circling for a prey it doesn’t know. But when it finds it way back to Spider-Man, it decides he has to die. For his part, Spidey is feeling pretty good. Like the fight with Man-Wolf released all his built up tension and anger. But he has a bad feeling.

He sure isn’t reacting to that Spider Sense too well. Who knows what’ll happen next time? I mean, probably a fight or two, but we’ll see. This issue has the first reactions from fans to Gwen’s death in the letter column, and they are predictably hyperbolic. Some say it needed to be done, while others call the makers of this comic “soulless, mercenary sadists” and “ the Marvel Soap Opera & Murder Co.” One dude sez “Frankly, I wonder what kind of home life you people must have, or had as children,” which is pretty great. But one dude, one Sergio Andrade, turns in the most memorable missive.

“To whoever had the idea of killing off Gwen Stacy,

You rattlesnake, you buzzard, you large red insect, you worm, you cockroach, you lizard, you skunk, you tapeworm in the digestive system of humanity: Why is it when the superhero and his girl finally seem to be getting together, you kill off the girl? May you lose every tooth in your head but one, and in that one may you have a toothache; may someone put arsenic in your midnight cocoa; may you be struck down by a spirit of justice and be reincarnated as an amoeba!”

With a letter like that, this dude shoulda gone into comics writing!