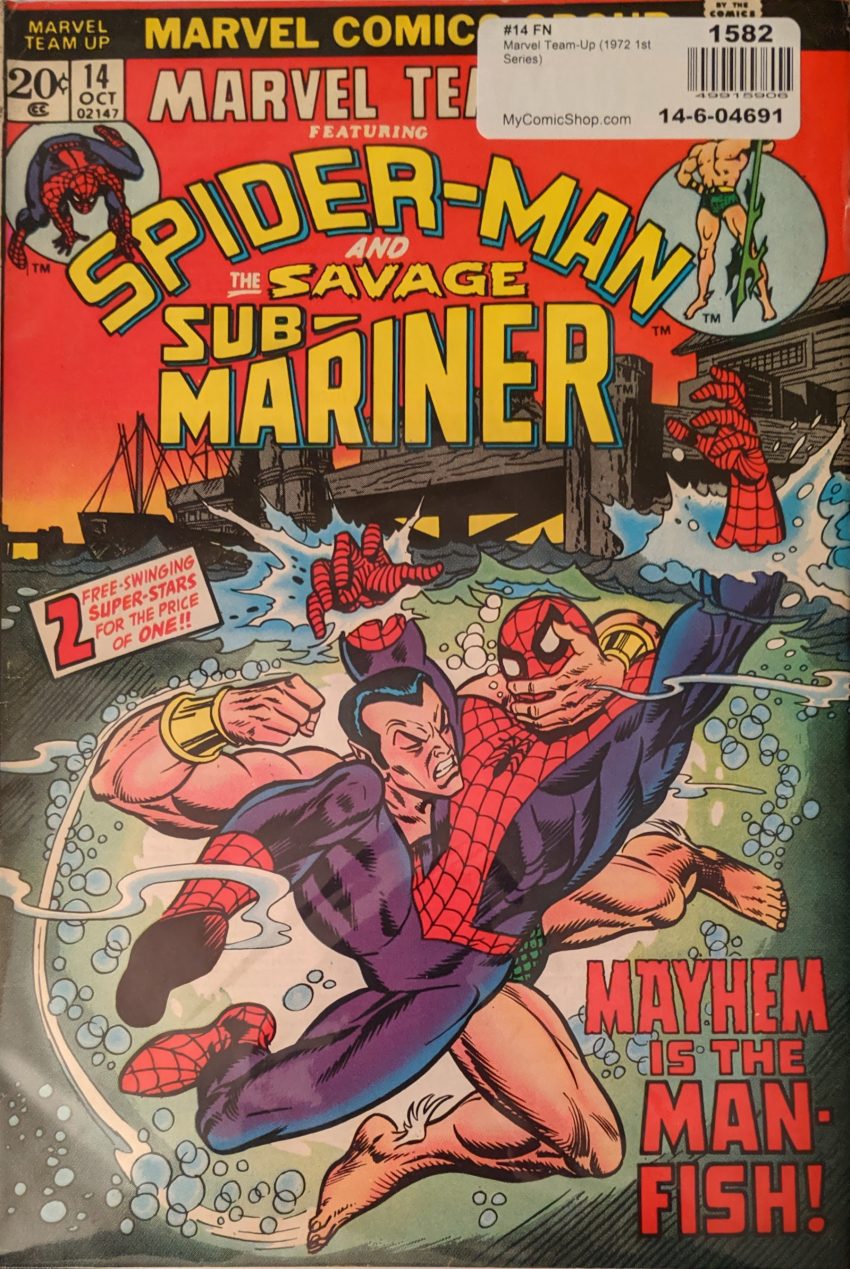 Are they calling Namor “the man-fish?” That feels insulting. Len Wein and Gil Kane are joined by inker “W. Howard,” whose first name I don’t know, and who seems maybe a little new to this. Spidey witnesses a mugging in progress on page one, as he so very often does, only this time, the muggee, clad in the classic Marvel “No one will suspect” costume of a trenchcoat and hat,  handily beats up his 3 assailants. But one of them comes at him from behind with a knife, so Spidey webs that guy, getting the attention of the “victim,” whose hat falls off as he spins around.

Straight up Todd McFarlane Spider-Man down there, unforgivable middle web on the bottom of the mask and all, weird. This sure went left. Was just over 2 years ago that Spidey went to another dimension and helped Namor fight a monster man, now he attacks first and asks questions later? Awesome action work by Kane, though. As he beats Spidey up, Namor insists has no ill intentions, and then he throws Spider-Man into the distance. But Spidey thinks taking out Namor is his chance to make people stop thinking he’s a menace (How? Show your work) and dives right back in. Namor literally begs Spidey to leave him be, and is interrupted in saything this is a matter of life & death by some kinda ship smashing through a wall and flying off.

Spidey tries to apologize, saying he didn’t realize what was going on, and Namor is rightly indignant after all the times he tried to keep them from fighting, but he’s lost his mojo, and says he knows no surface dwellers trust him, but now a murderer is free. It’s water-themed supervillain Tiger Shark, we’re told, who, along with the fiend Llyra (Hey, we know her!) kidnapped and killed Namor’s dad in his own comic! Namor tells us Llyra died in Sub-Mariner 50 (I guess she got better) and Tiger Shark was last seen fighting The Hulk in his own book, but now Namor had tracked him to New Tork, but their dumb fight let Tiger Shark escape. He’s escaped back to Dr. Dorcas, the guy who gave him his powers, who’s not worried that Namor was after him.

Men-Fish. Awkward. Also, those “men-fish” look a lot like… anything but fish. Meanwhile, Len Wein has no idea how the Spider Sense works…

Like, what? It tracks radiation signatures now? That’s maybe even less reasonable than the time Doom used it as a phone. Well, maybe not. You know, I don’t know, actually. Anyway! The tube takes them down to Dorcas’ underwater lair, where Namor immediately launches himself into Tiger Shark while Spidey deals with Dorcas. Wow, the comic’s over on page 20! Just kidding. Turns out, it’s two “men-fish” dressed as the villains, for some reason. For being Dorcas’ secret weapon, the fellas sure took them down easily. But touching them has drugged the heroes, uh, somehow, and they pass out. When they wake up, Spidey is stuck in a tube, while Namor is strapped to some kinda table.

Spidey webs the valve and pulls it, flooding the room with water, which instantly revitalizes Namor, as it tends to do. Tiger Shark sees this and tries to bail, while Dorcas frees his “men-fish” from the splash page earlier to fight the heroes. Namor rushes right past them to Tiger Shark, though, and it’s all kinds of fightin’ time.

As happens a lot in this book, an abrupt ending. I know Tiger Shark isn’t really dead, and I assume Dorcas isn’t, either. I bet Namor’s dad is, though. That’s superhero comics for you.