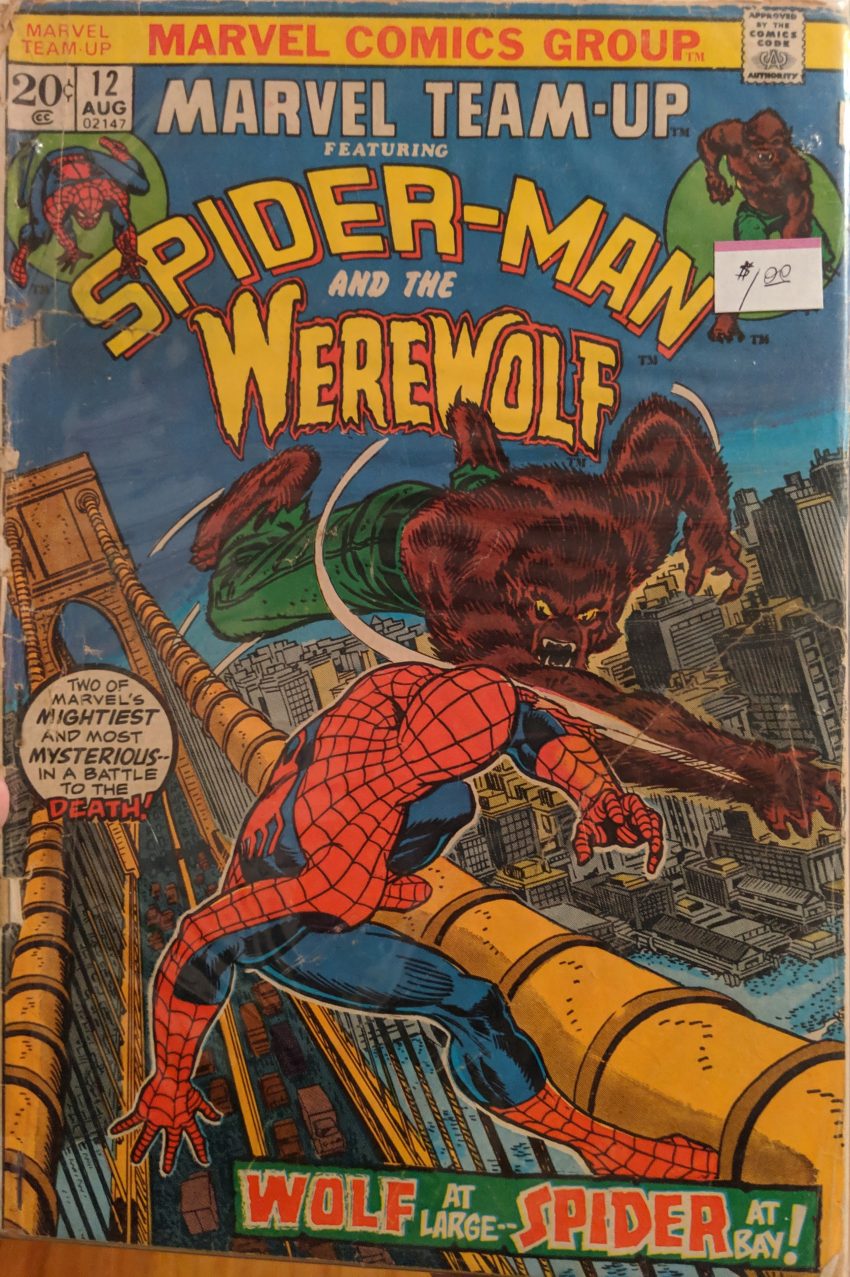 Now over to Marvel Team-Up, where the future ASM team of Len Wein and Ross Andru are on duty, with Don Perlin providing inks and Gerry Conway providing the plot. This is one of several Team-Ups I recently found at my local flea market for dirt cheap. This one in particular’s not in every good shape, and its staples are in a weird spot, making it kinda hard to hold open. But, it was a dollar. Hard to grouse too much. We find Spider-Man in San Francisco all of a sudden, swinging around hoping this trip will get his mind off Gwen, when he gets attacked by a werewolf.

Yeah, man, a werewolf, why not? By now, Marvel is getting serious about its line of monster comics. Werewolf by Night, Dracula and so forth. Only a matter of time before Spidey crossed paths with one of them. As Spider-Man and The Werewolf fall off the bridge, he flashes back to how he got here, asking JJJ for an out-of-town job. JJJ sees that Peter just wants to run from the memory of Gwen and isn’t into it, when Robbie comes to the rescue, as usual, suggesting The Bugle should run a feature on San Francisco transplants Daredevil & Black Widow.

I don’t quite buy this as a viable story for the paper, but hey, Robbie’s being cool. Man, Andru’s art is pretty unrecognizable in most of this issue. Anyway, Spidey finally finishes his flashback and gets around to saving he and his dance partner’s lives with a big web, allowing them to keep fighting on the bridge itself, cars weaving around them.

In the chaos of the fight, The Werewolf leaps right off the bridge and into the water below. Spidey thinks he should try to help, but doubts anyone could’ve survived that fall. One of the classic blunders! As Spidey watches the water for signs of life, a face appears in a cloud of smoke next to him, and then vanishes unseen. Man, San Francisco is crazy! Spidey swings away, changes to Peter Parker, and tries to get some food at a diner.

The sever’s shriek heralds the arrival of The Werewolf, less dead than advertised, and he’s still got spidey’s scent. But as he comes ripping for Peter, everyone in the diner, including that server, just go about their business.

The Werewolf takes Peter right through the window, but then Peter manages to dodge a leap that sends The Werewolf smashing head-first into a car,  stunning him long enough for our hero to make a costume change. But as he climbs up on a roof to do so, he notices everyone in the diner and surrounding buildings filing outside…

Perlin may be smothering Andru’s style, but there’s no mistaking those awkward Spider-Man poses. As the sun begins to rise, The Werewolf turns back into a regular dude. Spidey asks this dude what his deal is, and they swing off so he can get some answers in private. If you’re not familiar with Werewolf By Night, brace yourself, because he tells Spidey (and us) his name is JACK RUSSELL (Seriously!), and he’s from LA. He came to San Francisco with his sister & best friend on vacation, but they took in a show by a magician named Moondark, who hypnotized everyone there and caused Jack, in particular, to pass out.

Moondark forced him to turn into The Werewolf, and then sent the creature out specifically to kill Spider-Man. The explanation out of the way, now it’s time for the heroes to team up. Spidey takes Jack back to the theater, but as they descend the stairs they find in the back room, Jack turns back into a furball. They fight again, but Spidey’s had about enough.

Spider-Man and Moondark disappear into the… Mists of We’re Out of Pages, and the entranced prisoners wake up and Jack turns human again in short order. Back on the Golden Gate Bridge…

That’s it! No reunion with his weird new friend, no nothin’. Awkward. This issue features an ad for the famous Superman vs. Muhammad Ali comic! In a Marvel comic! DC must’ve had a ton of faith in this to advertise in their competition’s books, wow.