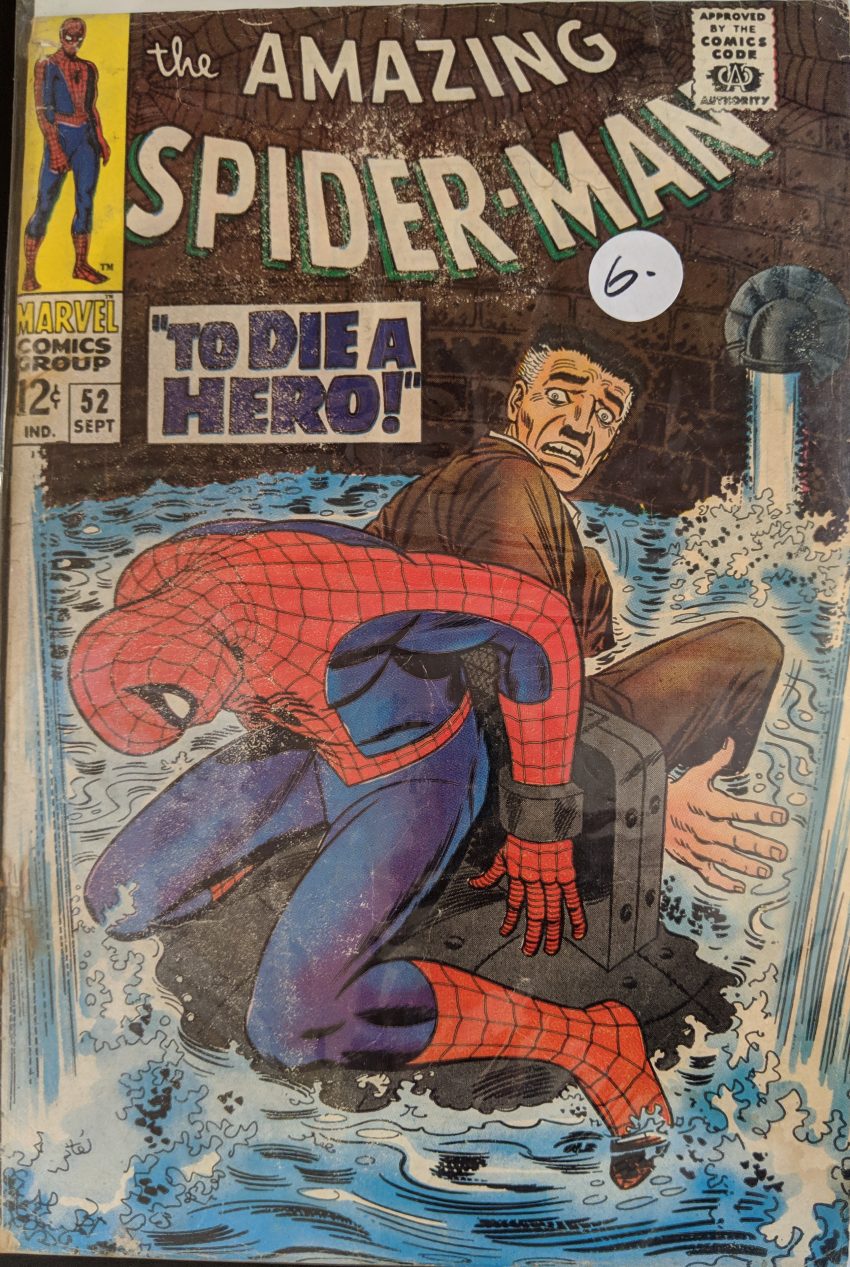 This is another of those cheap Heroes Con comics with water damage. As it was explained to me, it wasn’t that they’s gotten soaked or anything, but they’d been stored in a shed outside, and were exposed to a lot more moisture than they should be as a result. You can kinda get that from looking at the cover. Like 93, though, I’m happy to report things look much better on the inside except for some gray staining between the staples. A prior owner (The person who has terrible comic storage habits?) has written “D.T.” on the bottom of the first page, which picks up with Kingpin’s goons carrying the unconscious Spider-Man and a protesting JJJ to the “sub-cellar” of Kingpin’s building, which looks like your typical dungeon. They put their captives in the trap seen on the cover, JJJ telling the still knocked out Spidey that he’s a fraud for not being awake. When they start flooding the room, Spidey wakes up.

Finally loose, Spidey starts shooting webs, JJJ freaking out about how that won’t help, but we’ll have to see what he’s up to in a minute, because it’s time to formally meet Joe Robertson:

Not the most dramatic intro, but a welcome one. As Ned rushes off to get the story, Betty internally laments how she couldn’t take Peter endangering himself for photos, and now Ned’s off doing the same for the story. If only she knew how much worse it could get. If only she knew she’d have a weird streak as a gun totin’ tough gal in the 90s. Meanwhile, back at the Batman TV show-style death trap…

Um… ok. But… ok. I dunno, it’s comics, why not? Kingpin’s goons soon tell him they should be dead, so they drain the room and open the door to find a big web ball, from out of which pops Spider-Man.

He makes quick work of the guards, then frees JJJ, who protests that Spider-Man was only saving himself, and JJJ just happens to be along for the ride. Spidey refills his webshooters and then begins leading a panicked JJJ through the building, looking for an exit. As they encounter another gang of goons, Sidey tells JJJ to keep out of sight while he gets into it.

Classic. Believing Jonah to be safe, Spidey finishes up the goons and rushes on to find The Kingpin. His target is telling a shocked Frederick Foswell that JJJ & Spidey are dead, exposing the fact that the wannabe mob boss doesn’t actually want to murder anybody.

Naturally, that’s when Spidey shows up. They get ready for their climactic battle, but we leave them to see this:

That was the shortest tour of duty ever! Flash regales them all with what a cool soldier he is. MJ shows up and says she hasn’t seen Peter in awhile, flirting away with Flash, and then Gwen says they should have a party. Is Flash really out of the army already? Why did it take more than 50 issues for his time in Vietnam to impact the book in any way? I guess we’ll see. Back at Kingpin’s place, the battle is joined.

Seeing the direction things are headed, Kingpin decides to retreat, escaping into a secret passage in the wall. Spidey tries to follow, but the entrance explodes in front of him, guaranteeing Kingpin a clean getaway. He’s not giving up yet, though, and takes the long way back down to the cellar, trying to catch him. Nearby, Foswell is searching the same cellar for JJJ…

Spidey takes out the goons, but it’s too late. Frederick Foswell is a weird character, and he certainly was trying to return to a life of crime, but Spidey & JJJ agree, he died a hero in the end.

And so, a story that began with Peter quitting ends him totally committed to heroing, no matter how much of a pain it is. A nice arc. Unfortunately, once someone does a memorable bit, comics tend to recycle it over and over, and so this began a pattern of stories where Peter gets fed up, quits or wants to quit, remembers why he does what he does, and returns to crime fighting more committed than ever. Like the “Spider-Man has to lift a heavy thing” trope, it really didn’t need to be done more than once, and gets a little more tired every time.

Check out this entry from the letter page:

Jazzy John Romita has a background in romance comics, and it was perhaps inevitable that everyone would get prettier under him. Stan clearly seized on that to change the feel of the title, and people have noticed. But I submit to you, dear reader, that the original Peter Parker would not have stood the test of time. He was kind of mean and too much of a weird loner. If he remained a guy with literally no friends who resents everyone for not liking him without doing anything to improve his own situation, I’m not sure he’d still be here 800+ issues later. But I also think it reads as a natural progression. Like a lot of people, Peter came into his own when he got to college and got the chance to make a fresh start with mostly new people. That’s pretty realistic.

That’s going to do it for this trip back to the 60s. Next post we’ll jump back to where we left the Gerry Conway era, and see how Peter deals with the death of poor Gwen Stacy. Hint: not well!