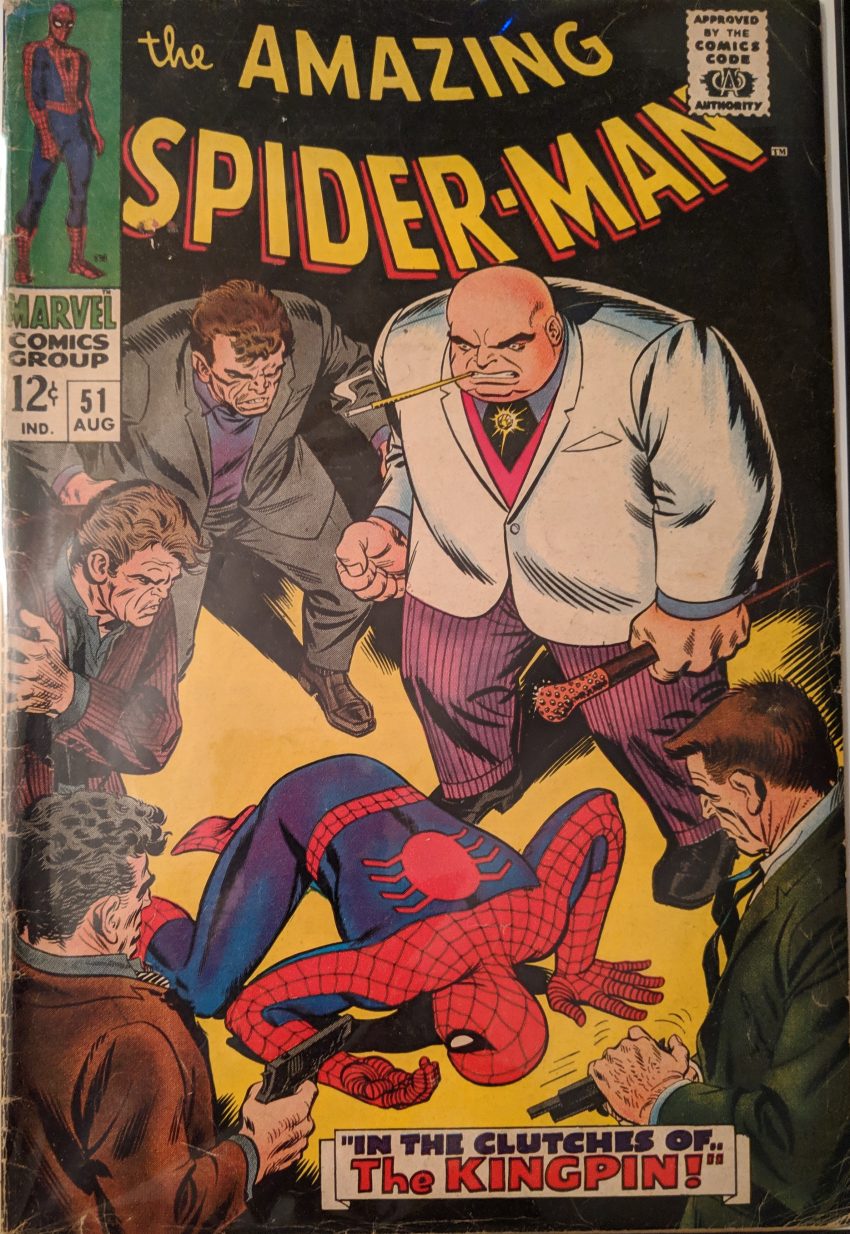 Not too hard to get, this one. Kind of a surprise to me. But so much of this has been. Sure, 50 is ultra-famous, but it’s also the beginning of a storyline. Silly me, thinking “collectors” might want a complete story. “I just want KEYS, MAN.” Ugh. Look, we’re doing this. A splash of The Kingpin smashing the city and saying with Spider-Man gone, the city is his turns out to be completely literal on the next page, as he has assaulted an innocent model.

Kingpin dispatches a mobster impossibly named “Blinker” to go get JJJ, while he sends “Big Turk” and his men to go do some crime and whatnot. The thing about those guys, though, is Spider-Man is back in action, and he happens upon their activities.

Man, is this entire issue gonna have misaligned cyan & magenta plates? Usually it’s just certain pages when it happens. Hi, welcome to Printer Talk. The Spideys here feel like something of a regression to Ditko-copying. Bit odd. One of the goons mentions Kingpin said Spidey was “dead or somethin’,” and Spidey actually thinks “Kingpin, eh? I’ll have to remember that name!” as he lays into them. Big Turk and his getaway driver Shorty flee, leaving the goons to fend for themselves.

Ah, the art’s back to normal. But the misalignment affects the whole sheet of paper, so the last few pages will be just as bad. Spidey runs off to collect his camera, and suddenly remembers he told JJJ he quit, and now he’s going to have to go beg for his job back. Does he? Couldn’t he still try to do something else? I guess the photog gig is pretty easy since he just takes pictures of himself. Back at Kingpin’s place, he’s considering what to do with that absolute idiot, Frederick Foswell, and orders him brought into his office.

Uh-oh! Big Turk and Shorty are ready to beat up The Kingpin for thinking he lied to them. Up ‘til now, he’s only threatened people with his “disintegrator cane,” but we all know his deal, so it’s time he told the readers of 1967, too.

At some point, someone needs to go ahead and make Kingpin a mutant. It’s the only thing that makes any sense. Everyone knows where they stand now, especially Foswell, who finally feels at least a bit of how stupid he was to barge in here and try to take over. As Big turk and Shorty slink away, Kingpin decides Foswell will be his instrument to silence JJJ. Speaking of whom, he’s rampaging around his office because no one’s getting him the real story on The Kingpin. And during this scene, an unnamed man who only appears in one panel suggests he put Ned Leeds on the Kingpin story, and that’s the first appearance of Joe Robertson. Kind of random. The internet would tell you next issue is his first appearance, but here he is. Ned comes in and JJJ is in the middle of raging at him when Peter shows up, bracing himself for impact.

Poor Harry. Always 2nd best. Peter soon sees some goon-y lookin’ types gathering in front of a fancy private club, and soon Spider-Man sees them threatening the owner, so he smashes in through a window and it’s fightin’ time. But one of them produces a grenade, so things get weird fast.

Spidey manages to hold up the beam until everyone can escape, and then dives out a window as the whole building comes down. That was some grenade!  Spidey gets to work hunting for his Spider Tracer as some of Kingpin’s other goons kidnap JJJ right out of his office and bring him to The Kingpin.

Kingpin makes sure the blindfolded JJJ knows Foswell is there and working for him, which only makes Jonah more angry. And one of those goons still has a tracer on him, so Spidey is soon outside the window, seeing JJJ held prisoner and Foswell returned to crime before he makes his move.

With his goons all wrapped up, Kingpin runs out himself, and his momentous first fight with Spider-Man is underway. Spidey underestimates him at first, and soon learns the error of his ways thanks to a big punch in the gut.

Well, this doesn’t look good. Come back next time for the presumably thrilling conclusion!