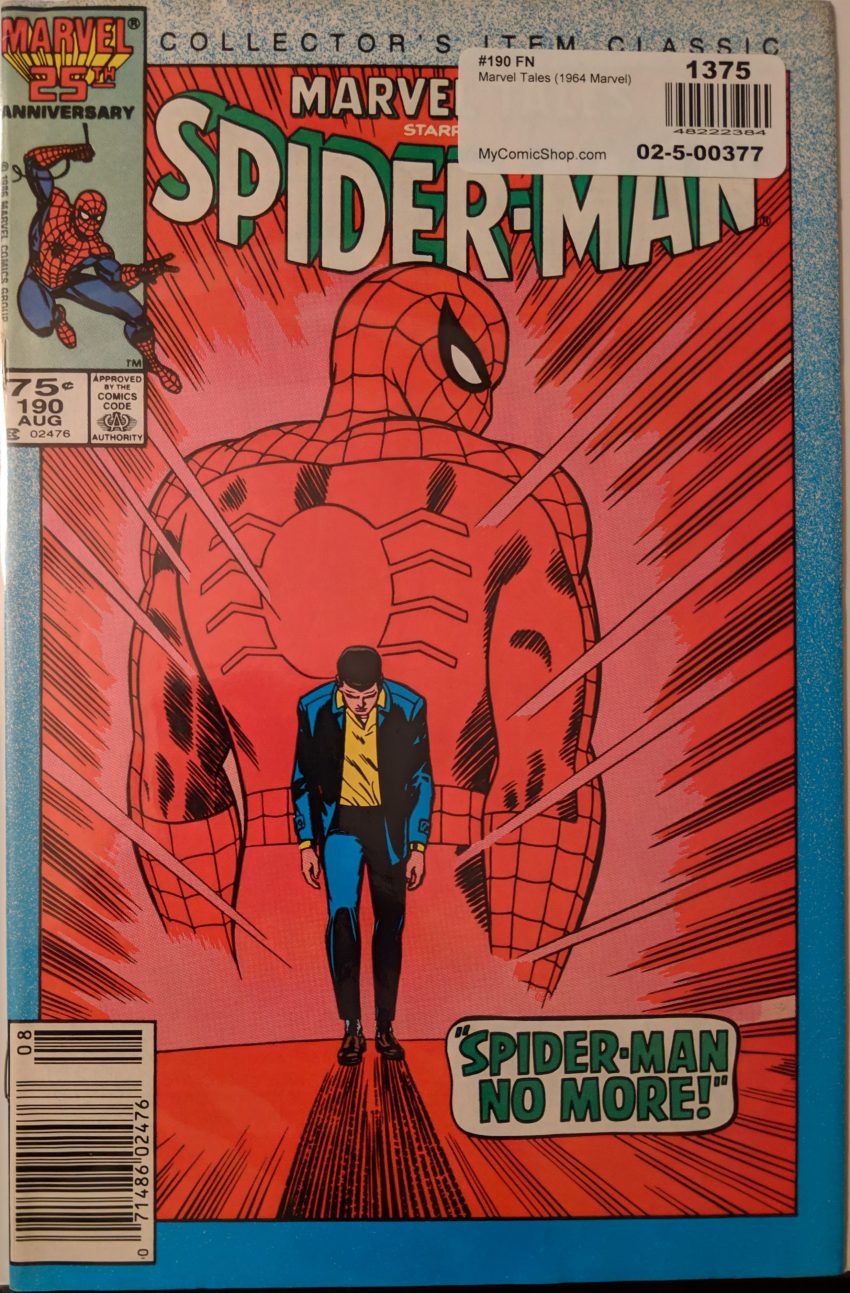 Yeah, so between having one of the most iconic covers, being one of the most famous stories AND introducing a major villain, this issue is waaaay out of my price range. I struggled with maybe spending $20+ on a ragged, coverless, falling-apart copy one time, but couldn’t do it. Routinely sells for hundreds. Stan Lee, John Romita, Mike Esposito & Andy Yauchus on hand to bring us this special 50th issue event, which opens on Spidey stopping some guys from robbing an office somewhere…

It’s only 4 goons, it’s light work. But while one office worker thanks him, another worries he’s just as bad as the goons, so he takes his leave, fretting about how so many people hate him even though they don’t hate other heroes. When he gets home, Harry tells him Anna Watson called to say Aunt May is ill, so he rushes out to their place.

Peter heads home, feeling bad that he doesn’t give more of his time to Aunt May after all she’s done for him, and knowing that he’ll never be able to concentrate on studying for an exam in Professor Warren’s class tomorrow, which he does pretty bad on. Warren pulls him aside to tell him his grades are slipping (It’s what he does!), and then Peter has to turn down an invite to a party at Gwen Stacy’s because he’s worried he needs to be available for Aunt May. He still thinks Gwen could be the one for him, but notes he hasn’t even had time to get to know MJ, let alone Gwen, all because of Spider-Man.

Egads! Spider-Man No More! The next day, an excited kid runs into The Daily Bugle, making a beeline for JJJ’s office (Betty tells him not to go in there and this young kid says “Maintain your cool, lady!” He really told her). He’s found Spidey’s outfit in the trash, and JJJ is delighted.

JJJ takes the costume on The Tonight Show, and some kind of roundtable show is depicted guessing that Spidey went crazy. Spidey quitting is the biggest news in the country. And so, a mysterious, huge, bald guy in a white coat and purple pants says now that Spider-Man’s out of the way, his plans can proceed. He calls a meeting of all the mobs to let them know the Kingpin is taking over! That’s right, True Believers. In addition to the famous “Spider-Man No More” story, this issue also introduces The Kingpin, star of stage and screen. As the mobs gather, Frederick Foswell tries to get into the meeting as “Patch,” but is denied. The mobsters are basically told Kingpin is their boss now and they better like it, it happens in a single panel. At The Bugle, Foswell, decides if the mobs are coming together, maybe “Patch” should be the one to lead them, thinking back to his days as “The Big Man,” one of the earliest crime figures Spidey ever fought. That can’t be good. JJJ has Spidey’s costume in a trophy case, and wants Foswell to follow up on Spidey’s disappearance as Peter arrives.

“Is the guy who literally only ever took pictures of Spider-Man quitting at the same time as Spider-Man a coincidence?” I mean, even if Peter wasn’t Spider-Man, what else would he do? Spidey was his whole thing. Really selling The Kingpin as fast as they can here. The idea that Spidey was the only thing holding him back when New York is home to the FF, Captain America, Iron Man, Thor, Daredevil, The Avengers, The X-Men, and so on is kinda funny, but let’s go with it. Here’s our first real look at The Kingpin:

20 issues after introduction, the first concrete evidence that Gwen is as into Peter as he’s into her, another milestone in this issue. Peter goes to see Aunt May and finds her in much better shape. MJ is there, too, about to go rehearse for a play. Peter heads home feeling great, excited about just being a regular dude. He’s spending his evening reading and listening to music as the mob continues its brazen attacks all over town, this time robbing the Welfare Office, which he hears about on the radio.

He goes to see Aunt May again, but she’s doing so much better she’s going to the movies with Aunt Anna, so he turns back toward his place, but then he sees a commotion on a nearby rooftop. He sees a night watchman being attacked by goons, and since no one else is around, well… he can ditch the suit, but he’s still himself.

He realizes the old fellow reminds him of Uncle Ben, prompting him to recount his origin, as he so often does. And with that he remembers, you know, his entire deal.

Yes, Frederick Foswell has just wandered into The Kingpin’s office, no goons, no leverage, and said, “I think I’m gonna be your boss now.”

What an idiot! Kingpin has his goons haul Foswell off, but we don’t care about that, we turn our attention to Peter Parker scaling The Daily Bugle building to go steal his costume back.

And so Spider-Man’s brief retirement is over, and the unfortunate trope of him deciding he hates being Spidey and quitting only to come back loving it more than ever is born. If it had just been this issue, that would be fine. If it had happened, like, twice, that would be fine. Instead, it happens every couple of years, and it becomes pretty tiresome. It was happening in the current books as this reprint was published, in fact. Speaking of stuff in this reprint that wasn’t in the original, it includes a fond memory of Stan Lee by Marvel’s 2nd-most-important Editor-in-Chief behind Stan, Jim Shooter.

On the letter page, Jim Owsley (Christopher Priest) talks about how the next issue of Marvel Tales will be a 64-page epic reprinting the infamous ASM 96-98, and talks about how crazy it was that Stan put it all on the line to publish them over the objections of The Comics Code. And about how his Mom hearing about the anti-drug message in those issues moved her to buy them for her son, leading indirectly to him being the Spidey group editor of the mid-80s. A lot of love for Stan in this random month in 1986. But anyway, we gotta see how this Kingpin business shakes out next time.

Not to harp on this subject, but I must draw attention to Peter talking about how long he’s been Spider-Man as he trashes his suit. He got bit by the spider in September 1962. It is currently early 1967, and he’s more or less aged in real time. Finished high school, been in college for a couple of years. He should be ~20 now. It would be the mid-70s before the “Marvel sliding time scale” began to take effect and everyone stopped aging. The whole “Spider-Man is about youth” thing just does not fly for me. Meanwhile, they’re trying to say he’s in his “early twenties” right now, in a quixotic effort to keep him young. I just can’t buy that. If they wanted a young Peter Parker, they shouldn’t have killed Ultimate Spider-Man.