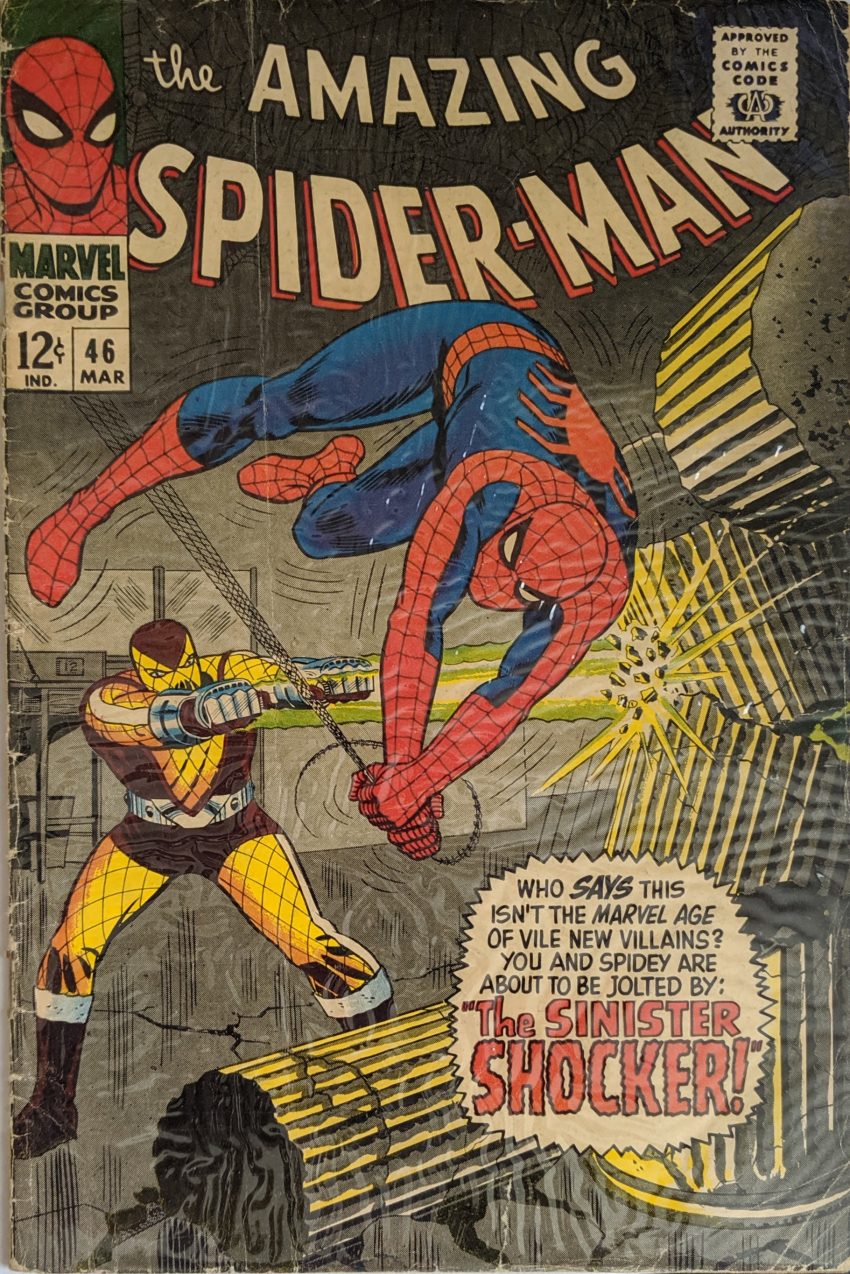 Who says?? Point ‘em out! This one can be hard to get at a reasonable price. This post originally discussed a reprint. But a stroke of luck delivered the original into my hands much cheaper than expected, so we can get our first look at The Shocker from his real first appearance. And we get it quick, on page 2, after a still-injured Spidey feels a wall he’s sticking to start to quake.

Talk about efficient. Name, powers, costume, all on page 2. They have a pretty intense fight  but Spidey’s at a disadvantage, and when The Shocker manages to hit him with both hands, that’s it for this round.

So the camera was in the window, several stories off the ground. That seems… suspicious. Peter Parker really should be taken in for questioning, at some point, the things he happens upon. He says his arm actually feels a lot better, but decides to keep it in a sling awhile longer. As he walks down the street talking to himself about being Spider-Man (Great move), Harry Osborn pulls up to offer him a ride to The Bugle… and that’s not all…

As Pete leaves, “Patch” follows him, hoping to prove Peter & Spider-Man work together. So close! If he’s right, then what? Mess up his own boss’s favorite thing? Not a thread you wanna pull, I don’t think. Elsewhere, The Shocker returns to his hideout in an abandoned building (So many of those around town), helpfully flashing back to his origins.

So he escaped prison, made a shock-absorbing suit and a belt that serves as a powerpack for his gauntlets, and became one of the most well-thought-out villain designs you could ask for. Meanwhile, Peter goes to pick up Aunt May at the train station. He’s eager to ask if he can move out, and… so is she.

That sure worked out for The Parkers. Everyone starts dancing, and Peter uses his bad arm as an excuse to go look for The Shocker. But Foswell is still on his tail, and as he ducks into an alley and changes clothes, his Spider Sense goes off…

Hilarious. But wait, it gets sillier:

Goodness, can he say “jackass?” What a goofy bit of business. I guess this is what they were referencing in ASM 109. With his identity protected, Peter changes back to Spidey, and finally ditches the sling for good as he heads out looking for The Shocker. He soon happens upon a cop calling in a report of tremors at a bank, and heads off for round two, which starts with Shocky knocking down a support column in the bank, just like on the cover.

They get into it, Spidey managing to get Shocker in a headlock, but unable to hold him due to the vibrations. This issue makes is really clear Romita has stopped trying to do Ditko fight scenes. Ditko really liked a 6 or 9-panel page to do a blow-by-blow, but Romita prefers room to let the big hero shots breathe.

Eventually, Spidey finally realizes how to put a quick end to all this:

Done and done. He swings on home, pictures ready to sell and his arm feeling back to normal. The next day…

Peter heads out, thinking about how good Aunt May has always been to him, and then sets up at his new place. But he ends the issue feeling down as usual. I can kinda relate this time. Moving out on your own is an intimidating experience for anybody. This issue John Romita really seems to have come into his own. His slow transition from Ditko impression to his own unmistakable style is complete. He’ll keep refining it, of course, but there’s no question, this is a John Romita comic.

Maybe not one of Spidey’s most fearsome foes, The Shocker, but I‘ve always liked the design. Following Ditko in the design department had to be really intimidating. He had a unique style, AND happened to come up with some of the most memorable villains in all of superhero comics. But Jazzy Johnny’s already got The Rhino and The Shocker on the board 8 issues into his tenure, and hands down his biggest villainous contribution to comics is right around the corner. Not bad at all. And The Shocker is in keeping with Ditko’s penchant for really pronounced patterns or textures, so he really feels right at home.

Speaking of shockers, in replacing the images in this post from the reprint with images from the original, I am shocked to find the reprints are pretty thoroughly recolored, and sometimes the line art is even slightly retouched. Maybe the old color plates weren’t available anymore… I mean, that kinda seems reasonable, actually… but I just would’ve assumed that much work would make a reprint title like Marvel Tales less profitable. Huh. Learn something new everyday.