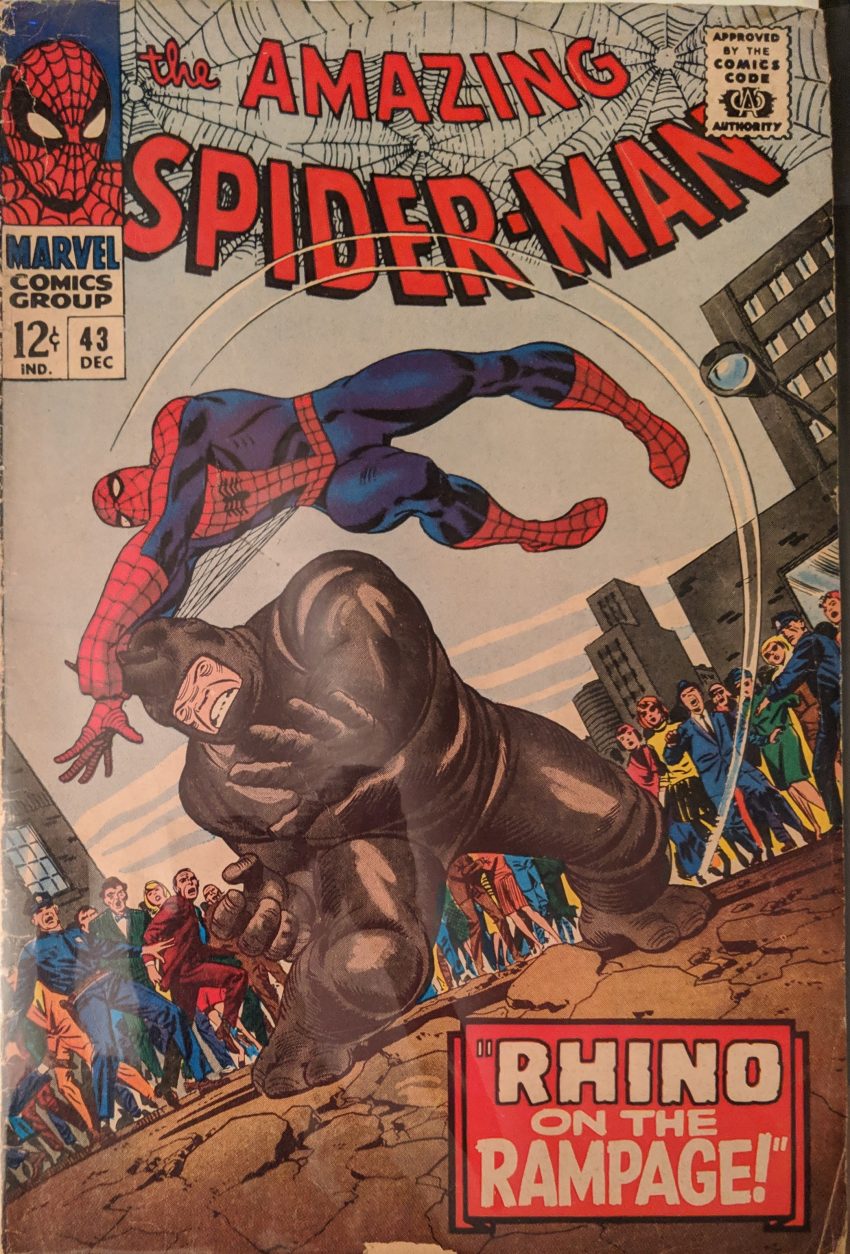 The Rhino is like a house guest that refuses to leave. We get it, you bump your head on stuff, when is Doc Ock coming back? Romita remains the only credited artist. Is someone inking him? I have no idea. But this issue seems to me like a pretty dramatic change in the art. This suddenly looks a lot more like a Romita Spidey comic from page one, which is a splash of him fighting The Rhino. The Rhino wakes up and busts out of prison without issue. But also:

Wow! I had no idea these two were engaged for so long. Wow. And the comics were moving more or less in real time at this point, so they were literally engaged for years. Sheesh. But that’s not the big story about a couple in this issue, of course…

I mean, still traces of following Ditko, but that is clearly the Peter & Mary Jane that Romita is going to be drawing into the 70s (And, in some capacity, for the rest of his long career). Peter didn’t really think through how he can become Spider-Man and fight The Rhino with MJ on the back of his bike, but he’ll have to deal with that later. Meanwhile, Foggy Nelson complains to Matt Murdock that he spent all night working on a defense for Rhino, only for him to escape. Romita came to Spidey from Daredevil, so it’s fun that they’re figuring into this. Matt thinks that he’d love to go after The Rhino as DD, but Spidey deserves the first shot since he fought him already. I didn’t know there was a code of conduct for this sort of them. The Rhino, for his part, is expecting Spider-Man to come for him again, and looking forward to it. Then he flashes back to his origin. He was a goon for a gang of mercenary spies who answered to no country in particular, and his bosses just tell him he’s stupid!

Sheesh. So, he trashed their lab and set out to be his own man, and his own mercenary, offering his services to the highest bidder, and that’s how we got here. Now that he’s done with the origin, he says Spider-Man won’t make it out of their next confrontation alive. Nearby, Peter tells MJ to stay with the bike while he tries to get some pix, and she just says, “Tell him to say cheese!” I’ve talked before about how it can be fun to read her older appearances with the knowledge that she would later reveal she’s known his secret the whole time. You could read her response as just more of her carefree attitude, or as her knowing what he’s going to do and not getting in the way. That’s fun. Anyway, soon enough Spider-Man is on the scene, and after ebbing up his camera, he leaps into battle.

I feel like Rhino often seems kinda tiny in these early appearances. Broad, sure, but he could be like 5 feet tall in that top panel. But, as they continue to battle, look how much of Romita’s trademark style is suddenly evident in these Spider-Men:

The eyes, the hands, the posing, it’s all suddenly way less Ditko, way more Romita. Like flipping a switch. After a lot of back and forth, Rhino manages to catch Spidey with a charge, and very nearly actually kills him. A cop runs in and pulls a dazed Spidey out of harm’s way as Rhino charges again. As he smashes through a big truck, in all the smoke and noise, he assumes he’s killed Spidey, and just wanders off, still hoping to go get John Jameson.

He returns for his camera, which almost falls to the ground because the web holding it up is dissolving, but he snags it. As he changes back to Peter, he finds a small piece of The Rhino’s hide in the alley, and pockets it for later. Then he gets back to MJ.

After that, JJJ calls to check on John, and Peter overhears he’s recuperating in a Westchester hospital. He worries The Rhino may still be after him, but he switches back to Spider-Man and takes his Rhino souvenir to Dr. Curt Connors, his go-to science guy in this period. Connors begins to study the sample of the Rhino’s hide while Peter calls Aunt May to check in, again wishing he had his own place. Spidey helps Connors develop something they think will stop The Rhino, though we don’t get to see what it is yet. Curt wonders if maybe The Lizard could help Spider-Man, but Spidey tells him he’s got a family to think about (And thinks that the last thing he wants to do is fight The Lizard again). Then he’s off to watch John Jameson’s hospital room. It’s not long before his hunch is proven right, as The Rhino smashes into the building looking for John.

Spidey commenting on the sound effects is pretty funny, but also pretty weird. Spidey keeps The Rhino moving, taking the fight outside, but soon the gimmick he & Connors whipped up begins to work, and the Rhino suit begins to just melt away from its shocked owner.

JJJ rages about Spider-Man using John as bait for The Rhino, but John congratulates Spidey on his victory while his dad is ranting, and Spidey takes his cue to leave.