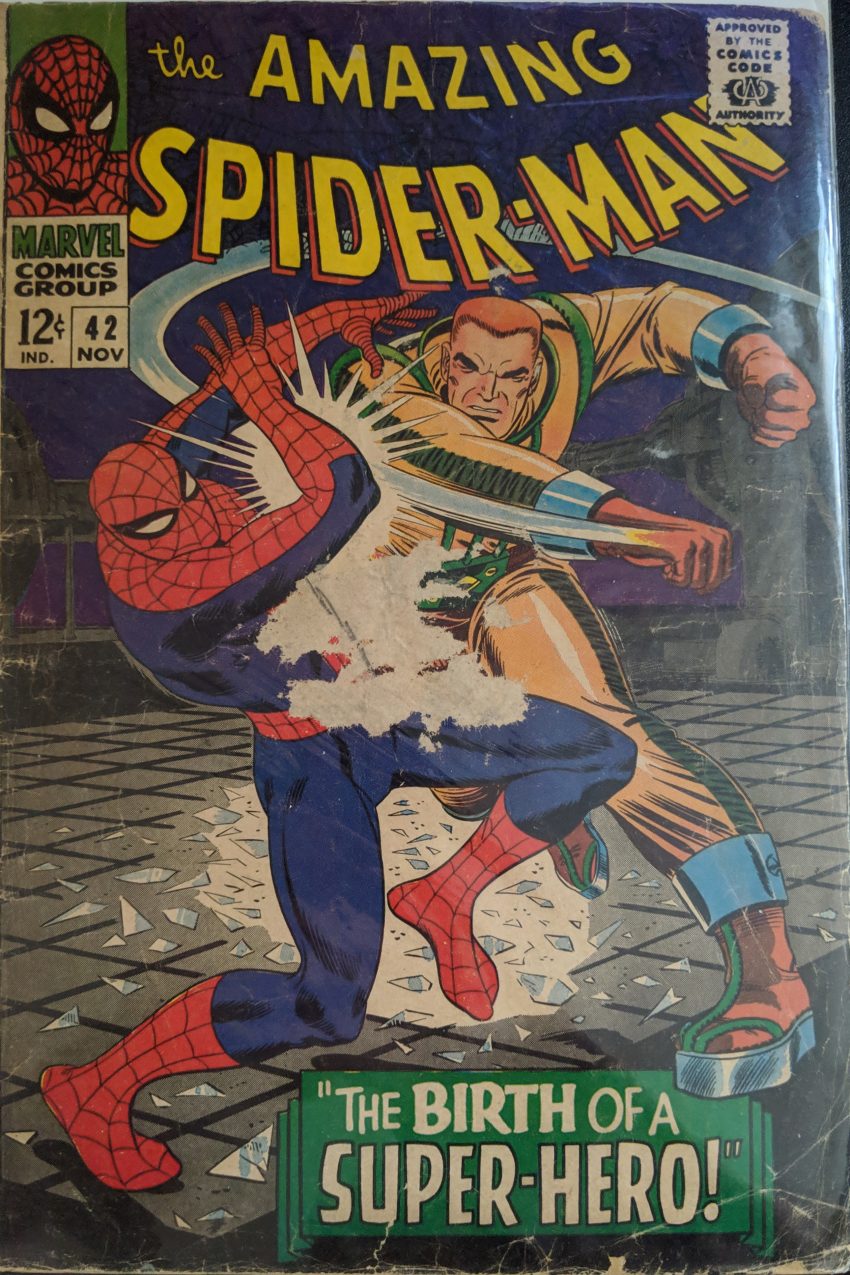 I find this amusing. Who’s the guy in the cover? Couldn’t tell ya, never read it. But I’ve known my whole comic readin’ life that this is a crucial issue for the introduction of Mary Jane Watson. And now I have it. Certainly not the best copy, but also one I could afford, so I am not complaining. You can see it has a pretty bad spine roll and some damage to the cover. Looks like someone decided to sketch back in the side of Spidey’s torso with pencil. Kinda funny. Anyway, let’s check this milestone in Spider-Man history out. Jazzy Johnny is the sole credited artist this month. The splash is quite the shocker:

Whaaaaat? The bank manager shows the cops the bent bars of his vault and complains that The Daily Bugle has tried to warn us so many times and we didn’t believe them. Meanwhile, on the Queensboro Bridge, Spider-Man dumps the money bag in the water, saying this was the easy part, and explaining it will be the challenge before swinging off to become Peter Parker again. A quick cut to The Daily Bugle shows reporter Fredrick Foswell running in looking for JJJ to tell him about the robbery, but Betty & Ned say he’s gone to see his son off at the airport, so we jump to there.

Ah, the spores! It was seeming like that was just going to be an excuse for The Rhino to show up last issue, but there ya go. Coloring his hair red on the cover threw me off. So, turns out the US and its enemies have all been expecting this (Like, how), so Rhino was sent to kidnap him to make him a (presumably Soviet) superweapon. Some goofy scientists theorize the spores must be from Jupiter, a place with a higher gravitational pull, making John act the way a normal man would on the moon. They worry his heart & nervous system can’t take the strain, and contact Tony Stark about producing some kind of containment suit.

Conflict of interest! They take John back to his hotel, where JJJ finally gets the news of Spider-Man’s supposed robbery and lights up like a Christmas tree. He immediately sees what has to happen, and begins convincing John that only he can bring that wallcrawling menace to justice. John, as we’ve seen, is pretty cool with Spider-Man, but the evidence is pretty damning, so he agrees to go looking for him, losing his guards in the process. JJJ is delighted. Meanwhile, some doctors are examining the still-unconscious Rhino. This is happening at a courthouse, for some reason. They begin to think his suit is actually a part of him that he can’t take off, and don’t know what they’ll do when he wakes up. And as they leave the room, he does just that. Elsewhere in the building, we learn Foggy Nelson has been appointed the Rhino’s lawyer. He says he would like to go consult with his client as soon as possible, but he may want to rethink that.

Rhino’s brief rampage is stopped by a “spray tranquillizer,” but the doctors know this is only a temporary solution, and really want to know what his whole deal is. But we leave them to it to go see this…

Romita tries out what will become Gwen’s signature look for the first time. Later that night, Spider-Man hits the streets, and it’s not long before he runs into John Jameson, who’s just standing a roof, hoping Spider-Man would swing by. This strategy has proven surprisingly effective over the course of Spidey history. Spidey swings down to say what’s up, and John just starts wailing on him. Spider-Man tries to explain the whole bank robbery thing, but John is uncharacteristically not interested.

After John smashes a brick chimney and Spidey finds webbing up the debris and hitting him with it does nothing, he decides it’s time to go, hits John in the face with his web on its more liquid setting and just flees. Then he flashes back to what actually happened so we can finally see. Turns out, Peter Parker was at the bank when a bank bag set off his Spider Sense. Someone was planting a bomb in the safe. He switched to Spidey and got the bag with the bomb out of there, not stopping to explain himself in case it went off. He thought it would explode harmlessly in the water, and then the bank would find no actual money was missing and he’d be in the clear. Not as yet, though. Meanwhile, JJJ tells Foswell to take the Rhino story, while he himself plans to cover his son heroically capturing Spider-Man. Then he has a surprise visitor.

That doesn’t sound good. John has become bloodthirsty and crazed. He lets his guards take him back to his hotel room, but says nothing can stop him from getting even with Spider-Man. Later that night, Peter Parker wakes with a start, saying he can’t leave things so open ended with John. Soon, Spidey’s on the hunt. And so is John, knocking over his security detail and running out on the street to prove he has the power to make his own rules. It doesn’t take long for them to find each other John takes some weighted components off his boots so he can leap around like The Hulk, and it’s fightin’ time once again. Spidey maneuvers John into a power station, because he’s got a plan.

Well… ok. Spidey calls the authorities, and John’s doctors soon confirm that the spores have been destroyed, and John is back to normal. JJJ can’t accept that Spider-Man has saved his son a 2nd time, but you knew that, I’m sure. But, look, we’re not really here for that, we’re here for this:

And with that unfortunate instance of misaligned printing plates (Just my luck), Peter’s life would never be the same. Come back next time for more MJ and more Rhino.