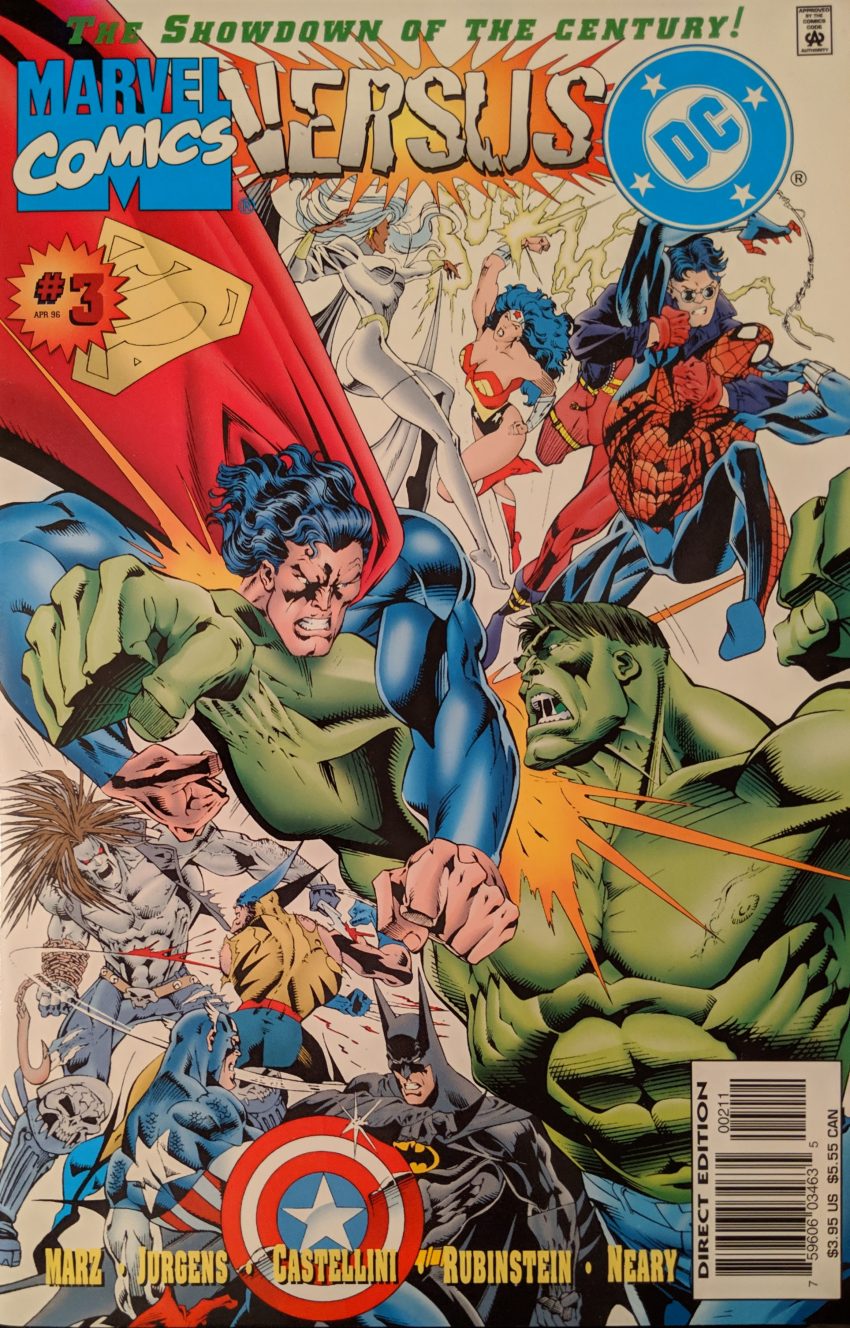 So, we’re back with more of “The Showdown of the Century!” I mean, generally speaking, that kind of hype is just that in comics, but it was kinda true here. What could top this? For those keeping score at home, it’s 2-1, DC, in the bouts as we go into the 2nd half. And the 2nd half kicks off with Jubilee recapping the series so far, which is hilarious to me. If you decide to grab Marvel Vs. DC #3 without getting the other two, I feel like that’s on you.

A montage shows us still more team-ups and throwdowns, like Black Canary/Black Widow, Joker/Green Goblin, Iron Man/Steel, Captain Marvel/Captain Marvel (That’s fun), Green Arrow & Hawkeye, and a random picture of Daredevil. They seem to have forgotten to give him an opponent or friend. How embarrassing. Jubes is still writing in her diary when she & her new crush Robin are zapped away to fight each other in a “balloon warehouse.” They share a kiss and say whatever happens, happens, and then obviously, Robin wins. But as gently as he can. 3-1.

Then Silver Surfer & Green Lantern’s bout begins. They, too, had a recent crossover that they reference as they talk about not wanting to do this. Then they do it, The Surfer demolishing GL with ease, as he should (Especially this brand-new rookie GL). 3-2. Then Elektra dispatches Catwoman, who wonders out loud why either of them was chosen as a “hero.” That ties us up at 3-3.

The 90s were such a sad time for dudes’ hair. Meanwhile, at the cardboard box…

…Axel Asher becomes Access., the hero whose sole power is traveling between the two universes. Which… is not terribly exciting, as a superhero. Elsewhere, in the first of the matches decided by fan vote, Wolverine beats Lobo to the surprise of no one in either universe, but it a pretty cop out-y scene.

I guess they didn’t want to show a lot of gore as the score becomes 4-3, Marvel. Meanwhile, as you may have guessed, Wonder Woman lifts Thor’s hammer.

Truly heroic of her. Here is the only upset of the book, as the first female superhero comes to a loss at the hands (and lightning) of the current most popular female hero (Thanks to a wildly successful X-Men animated series).

I don’t think Storm actually had a prayer against Wonder Woman, but the fans have spoken. 5-3. And now we come to our man event. Spider-Man… vs…. Well…

Seriously? Seriously??? The best and most beloved hero in the Marvel canon has to waste his time fighting SUPERBOY? Is it because they’re both clones? I mean, har har, but come ON. Superman gets to fight The Hulk, and Spider-Man has to settle for this. To be fair, I’m not sure who Spidey could have fought, but… BAH, I say!

I mean, I’m not an expert on this Superboy. I have the comics that introduced him, I read a lot about him, but I’m old now, and that was a long time ago. Being a clone of Superman, he may well be more than enough to beat Spider-Man. It’s not that it’s unfair in terms of powers.

It’s just that Superboy is a discount Superman, and THIS Superboy in particular is a JOKE. Also: a bit odd that Ben’s “impact webbing,” which he developed early in his career as The Scarlet Spider, hasn’t come up before now on the blog. At any rate, there it is. I mean, why even bother drawing the other outcome? Superboy was gonna maybe get more votes than SPIDER-MAN? Sure. So, it’s 6-3, Marvel, going into Superman vs. The Hulk, who is currently Bruce Banner in the body of The Hulk in continuity, so he’s super smart in addition to super strong, but that doesn’t matter in the face of the enduring popularity of his super opponent. They have a titanic, if brief, battle, but…

6-4. Maybe if Hulk had grown his hair out… But now we come to the one people love to argue about: Batman Vs. Captain America. Some would say Batman’s extensive training in martial arts would make him the victor. Others would say that a career soldier artificially enhanced to peak human levels should have the upper hand. But I think most reasonable people, regardless of who they favor, would concede this will be a close one. I mean, it should be. I’m sure the votes were a landslide for Batman. But no one involved in the creation of this event seems willing to say either of them could beat the other.

Cap having to tell Batman he wasn’t around in the 40s even tho Batman was created a year before Cap is funny. It’s cop out time! As the tunnel floods, they both throw their signature weapon, and Cap misses, so Batman technically wins. Then they begin to drown. Batman is shown saving Cap as they swim to a sewer grate, but by the time they get OUT of the grate, Cap is helping an obviously injured Batman. So no one wins, but Batman technically wins. So it’s 6-5 as we run out of fights, and Marvel has somewhat surprisingly won. Access finds Cap & Batman and does some hoodoo to them, and then we see that, instead of allowing the DCU to be destroyed the brothers decide to merge instead of fighting each other, resulting in… The Amalgam Universe.

Yuuup. We’ll take a look at that before heading to the conclusion in our next post.