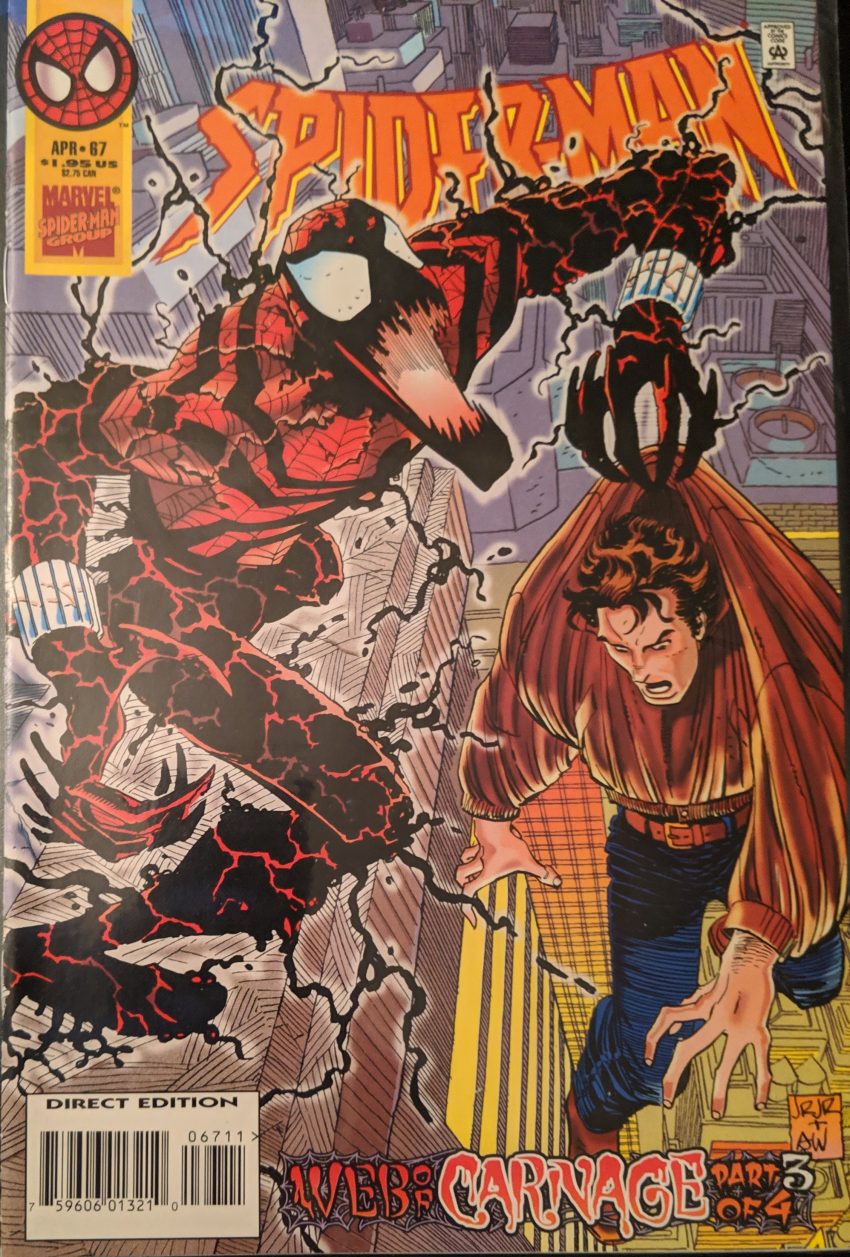 This is the first one since SSM 0 I actually kind of remember. Because of the art, naturally. This story may be rather silly, but I mean look at this splash:

Venom and Carnage rarely seemed at all menacing to me, but that’s a pretty nightmarish creature. While I do find this a bit… I’m not even sure what word I want. Forced? Something. Regardless, while this plot doesn’t quite get me going, I do think it’s sort of fun that Peter almost bonded with Venom, and now Ben is trying desperately not to bond with Carnage. Similar, but very different experiences for the two Spider-Men. Jessica is still on the scene, once again rooted in place by her hatred of Spider-Man, watching as he fights the symbiote, his suit churning and shifting from Carnage to Spider-Man.

Shame about that pink rectangle at the top of the page. I assume that’s a printing thing, it happened in a lot of comics, but I also don’t really get it. Ben is able to wrest control of his own body from the alien, slashing at and destroying Jessica’s camera before webbing away, hoping to go home and find a way to control it, but it’s still fighting him. While he’s doing that, Peter Parker stands on a roof, thinking about the strange turns his life has taken recently.

These two frankly never got enough moments like this. Most writers clearly didn’t know what to do with them married, would gin up strife between them or have Spider-Man’s life interfere with theirs. They rarely got portrayed as the team they should have been. At this page turn, I’m going to mark something I have been puzzled by for 3 issues now. Every book this month includes a full page advertisement for last month’s Return of Kaine storyline, discussed like an exciting upcoming event. You know, the one you presumably already read if you’re reading this issue. How did this happen? Anyway, next up is the sequence I remember, one of the only things I remember from this period, as it turns out, because of how incredibly effective the art team is on it. I’m gonna run the whole scene because it’s so good.

Without question, the creepiest and most tense symbiote-related scene I have ever read. Magnificent work. Ben barrrrely holding it back is so well done! You may not have picked up on this, but I love John Romita, Jr. so much. At any rate, Ben collapses on the floor as Peter leaves. As he tries to keep control of his mind, his desire to protect Trainer from Peter merges with the symbiote’s desire to kill, and suddenly he’s off to murder his “brother.” Meanwhile, at Ravencroft, Dr. Kafka & John Jameson watch Cletus Kasaday, Carnage’s usual host, exhibiting increasingly OCD behavior that gives way to tearing his room apart. As they watch, Kafka wants to know how the symbiote could have gotten out, could have possessed John, and where it is. He says he doesn’t know, but he’ll find out. “Ravencroft: It has always been 0 days since our last security breach.” But, you know, elsewhere…

Yikes. Ben reels it in and Peter is able to get to the hospital, only to find Seward Trainer checked out earlier today. Well, that’s sudden. Up on the roof, Spider-Carnage is tearing things apart, still fighting internally. Back inside, Peter tries to get an administrator tell him where Trainer went, but has no luck… until a commotion is started by security rushing to the roof. Peter uses the distraction to check the computer himself and see Trainer’s medical bills were paid for by “The Multivex Corporation,” whoever that is. Then he hears it’s Carnage on the roof and gets a bit more scared. Peter rather stupidly heads to the roof to find Ben JUST BARELY not killing anybody. Now that he knows what’s happening, he’s got no time to do anything, because…

JRJR’s take on armor & weapons in this period is unmistakable. Bulky, heavily padded, looking functional but also absurdly over the top. Rather like Jack Kirby tech in a lot of ways. He did a 2-issue Cable mini a few years prior that allowed him to go nuts with stuff like this, and it is glorious. Carnage manages to damage the helicopter, forcing it to go land elsewhere, and then shattering a chimney into a shower of debris severely damaging all the Ravencroft goons. He’s about to kill Jameson when Peter bashes him over the head with a section of brick. Carnage, now fully in control, swats him across the roof, leaving him dangling precariously.

On the one hand, Peter seeming to walk away from this unfazed is kind of insane, but on the other hand, I guess he IS Spider-Man, depowered or not. He’s seen a lot. At any rate, come back next time to see how Ben gets out of this Carnage situation, and probably for a lot more red herrings regarding the whole clone thing in general.