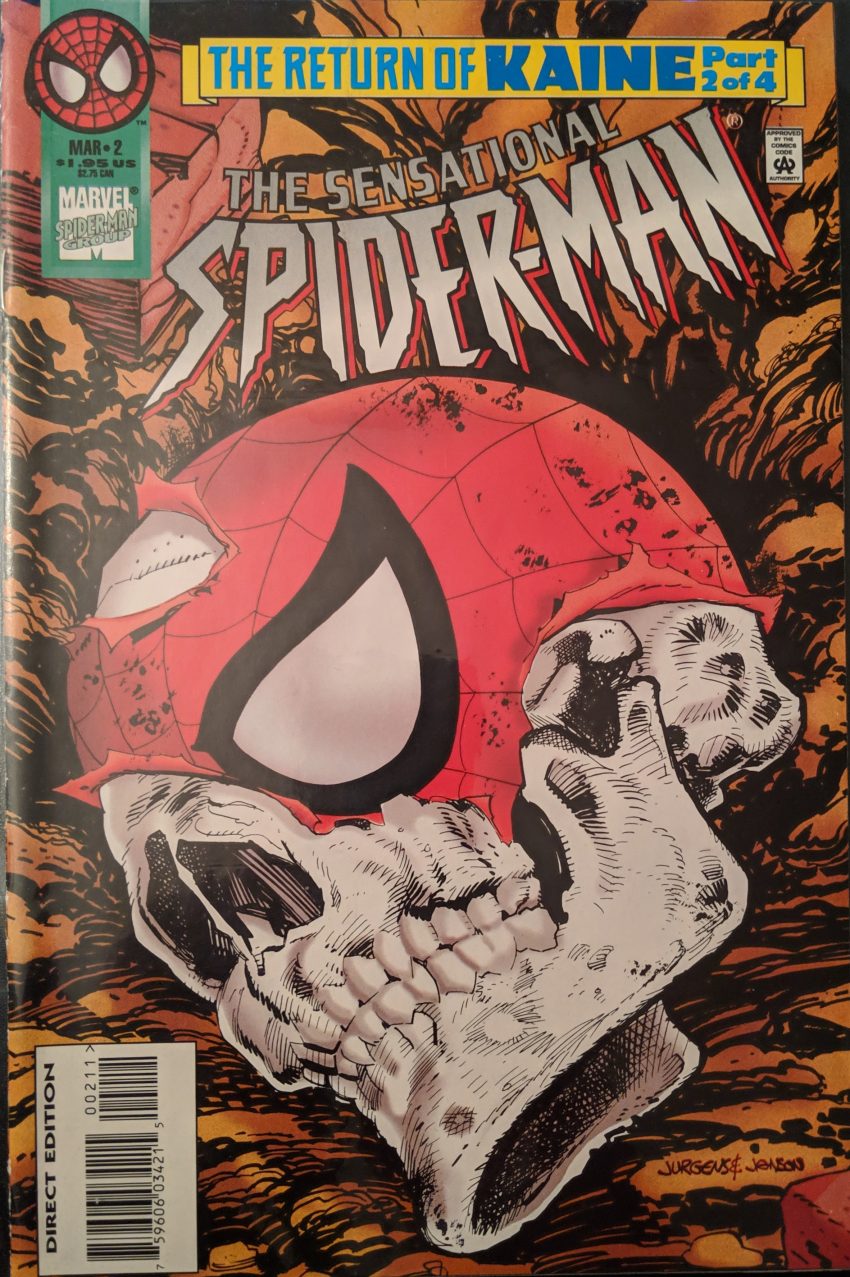 So, Spider-Man swings to work on some really pointless internal monologue about how Tarzan never had to worry about getting to work on time and other banalities. It’s two whole pages of filler, but it’s also a 90s comic, so there were only 3 panels on those 2 pages.

Why is the Spider-Man creative team so obsessed with this TV thing? I think it’s come up in 6 of the last 8 issues. Ben flashes back, of course, and remembers climbing out of the smokestack, so what could this be? Shirley just happens to want him to run some errands, so he has an easy out to go look in to this.

So I guess this is gonna be one part Gwen & MJ, one part Betty & Veronica? I legit remember nothing about these two. Ben may not be the real Peter, but he maintains his everyman status of having beautiful women fighting over him. Actually, Ben really ups the ante by being a coffee shop guy who’s a bit older than both women. I feel I have to post this page even though it’s more filler.

A single image showing Spidey in various parts of his swing or leaping from building to building is a grand tradition in these pages, and this is one of the absolute worst examples I’ve ever seen. But, anyway, as you can see, that word balloon down there transitions us to the much-missed-at-this-point Daily Bugle.

Jurgens really nails the look of JJJ. That’s a great take on him. Too bad he didn’t get to draw him too much. Elsewhere, Kaine & Muse are on the run from The Great Game, and they’ve picked up a tail in the form of The Rhino, who has apparently stooped to being one of The Game’s participants. But we cut away from that altercation to Spider-Man breaking into the morgue to check out the skeleton.  And when he finds it, he’s shaken, because he’s now convinced it’s real.

Right about then, JJJ shows up, demanding to be allowed to see the body even though it’s late at night. He bribes the guard with the promise of $2000, and the guard says, “Enjoy yourself, Hootie!” (Love those fresh references), and then, inevitably…

Spider-Man just isn’t the same without messing with JJJ. And yeah, he’s stealing a corpse. Not his finest hour. We cut to his coworkers and customers from the coffee shop all hanging out in his apartment without him, a surprise party with no one to surprise (Jessica told the landlord she was his sister and that’s all it took to get in). Desiree wore a shiny dress and Jessica wore a nice dress, too. Shirley calls her on it and tells her to go for what she wants. I just want to know what time it is. And when Ben actually works. He left work to go look at that skeleton, but he didn’t get there until late at night, late enough that the coffee shop is closed and everyone from it has come to his house. What is the timeline, here? At any rate, he’s swinging off with his corpse to some as yet undescribed end, when he stumbles on the fight from earlier.

YES DAN WE KNOW YOU USED TO MAKE SUPERMAN COMICS. Rhino smashes into a building, causing a whole lot of it to fall toward Muse. Spider-Man dives in and pushes her to safety and gets crushed in her place. Kaine & Muse escape in the cloud of dust, and Rhino wanders off looking for them.

Man, he really shrugged that off. “A building fell on me, that totally sucks!” Seems like he should be pretty messed up. Ben sees Jessica watching the TV she got him alone in his place. One quick change later and a visibly battered Ben Reilly enters the apartment. He kinda tells her the truth, that he got caught in some villains knocking down buildings, and she says this was supposed to be a surprise party.

Oo la la! That last panel is a pretty great visual. Well, at least they’re gonna stop talking about how Ben doesn’t have a TV in every single comic, I guess. Join us next time for… more of this general business, I assume, I really don’t remember a page of this. I can’t believe it. I can tell you how we got here, I can tell you how the Ben-as-Spider-Man phase ends, I can tell you what happens next, but I seem to have blocked all of this out. This is almost disconcerting. I mean, I did hate this with a passion, so I certainly read each issue once and that’s it. But I doubt I read much of the previous block more than once, and I remembered it pretty well. This is just weird.

Dan Jurgens is feeling like the odd man out in this art lineup. His style feels a little out of place to me. That’s probably not fair. The other 3 books are by guys who’ve devoted significant chunks of their lives to Spider-Man, of course their stuff will feel both more natural on the books and more natural next to each other. But whenever I move to ASM from SSM, it always has this “Ok, this is right” feeling. Jurgens seems to be going for more of a “classic” feel than, well, anyone else is in 1995. SSM doesn’t look bad to me at all. Just different, and not quite of its time.