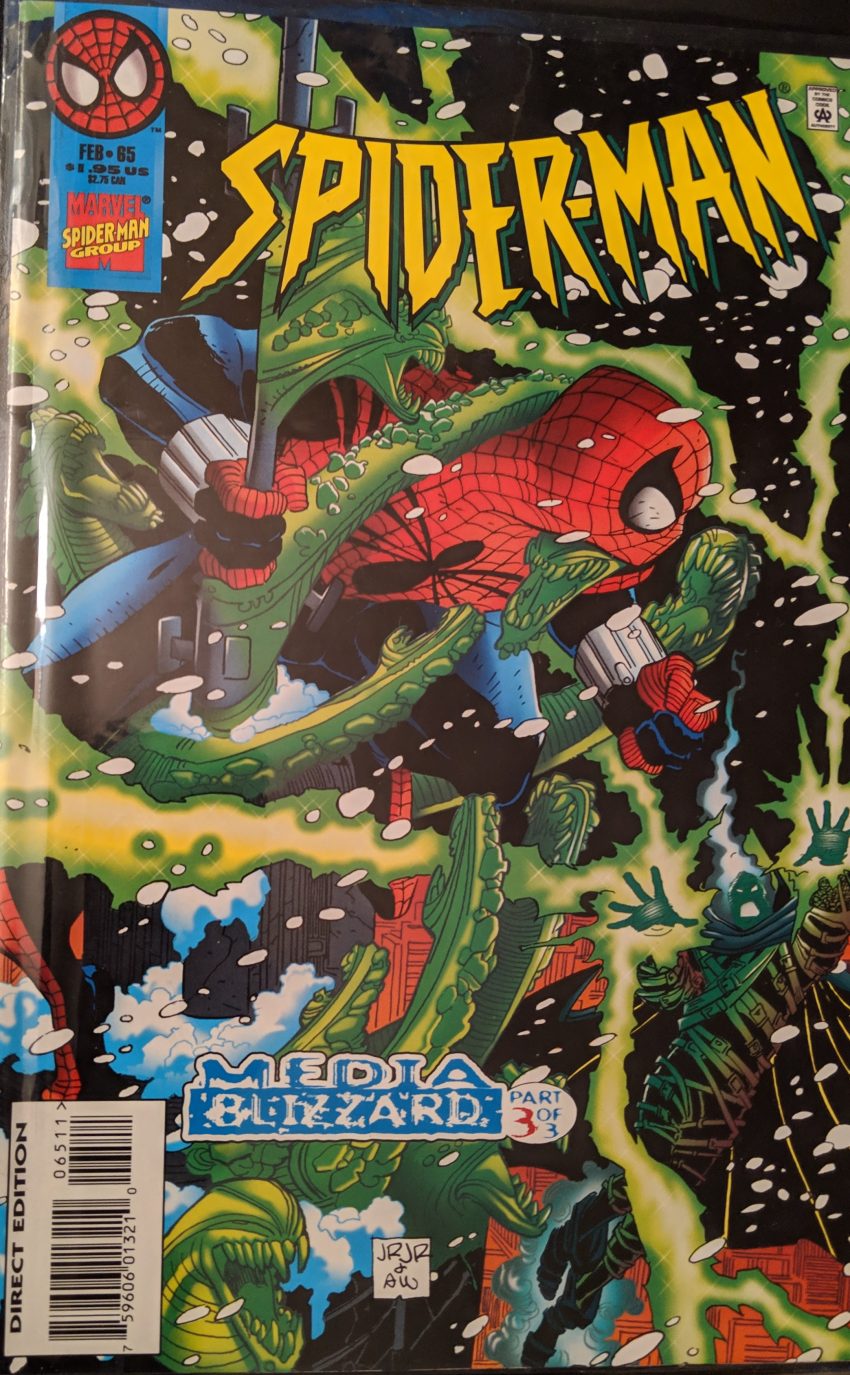 Time for the thrilling(?) conclusion to Media Blizzard. Looks like deadlines got the better of JRJR on this one, as the middle of the issue is drawn by Tom Morgan and inked by Dick Giordano. Spidey returns to the rundown theater, and of course it’s empty and abandoned, everything he saw last time an illusion, Michael. He recaps the story so far as he looks around and then decides he should go home and sleep. Meanwhile, in a fancy skyscraper in Midtown, Mysteryvision is opening its real headquarters with a big party for industry bigwigs, and bossman “Randolph Hines” slips away for a moment.

Look at those 3D graphics! Not rendering too well! I must again say, if Mysterio’s deal here really is just becoming a famous TV man, why does he need to fight Spider-Man? Other than this being a superhero comic? Morgan & Giordano jump in here, and the transition is pretty jarring.

Jessica is not impressed with Ben’s slovenly ways. He makes an excuse about working a double last night (Sort of accurate!) and hops in the shower. Soon enough, out walking around, they talk about how they both don’t really have any family in the city and whatnot, then see a crowd of people transfixed by Mysteryvision. Ben wonders if this is even really a job for Spider-Man rather than the FCC. then a box truck rushes by out of control, crashing and bursting into flame. Ben thinks he’ll have to make an excuse to ditch Jessica, but…

Spidey springs into action, and Jessica’s focus shifts from the wreck to him exclusively. To the point that she’s making things difficult.

If I was supposed to understand what happened there, I did not. Spidey is forced to web the TVs to get people to stop staring at them, and realizes this is his problem, after all. Did he, like, forget this almost happening to him in part 1? Switching back, he finds Jessica wants to cancel their date to finish up the photo job, so he heads to work, only to find Shirley & Devon entranced by the TV. Buzz isn’t, though, reading his paper, and he accidentally gives Ben the idea to fo find Mysterio’s transmitter.

Johnny & Al tag back in to finish the issue from here.

(I like that dragon joke) FINALLY. FINALLY Spider-Man doesn’t just buy in to the friggin illusion for a change. Unfortunately for him, while the dragon isn’t real, Mysterio is, and he shoots Spidey through the illusion with some kind of blast. Spidey dodges past him to the tower, and manages to rip open a plate to try to shut it off. Mysterio helpfully tells him he’s charging up all he’s got left for one final blast, so obviously Spider-Man tricks him into shooting the tower for him.

Literally every fight Ben has had so far has involved him whining something like “I WANTED to be Spider-Man again?” or “I came back for THIS?” You know how to leave town if you ain’t up to it, Store Brand Spider-Man. Come back next time for the beginning of a 4-part story featuring by far the stupidest villain of the period.