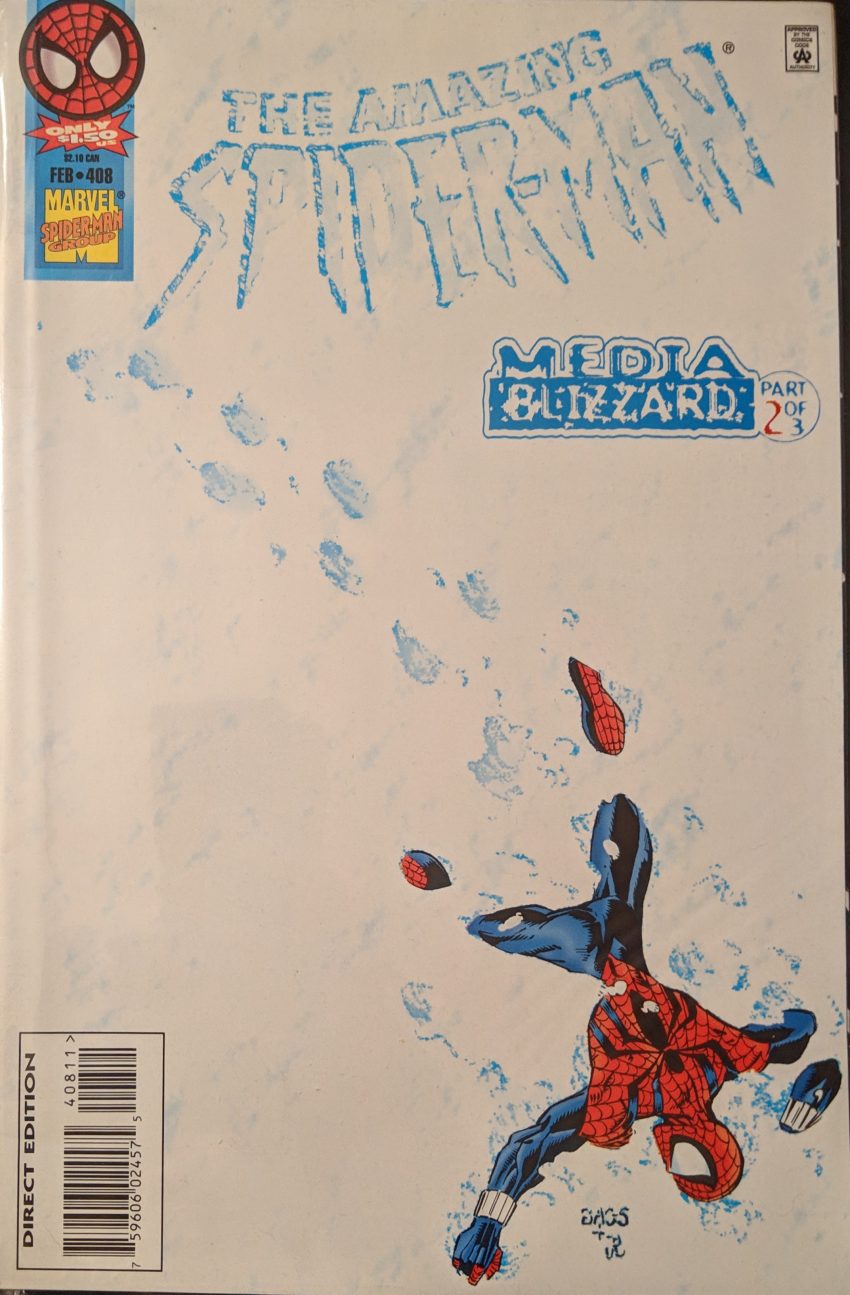 Good cover concept! Sometimes less is more. This one picks up right where the last one left off, Spider-Man in his frequent “falling to my death” cliffhanger scenario. As usual, it’s fine.

I mean, sure, that hurt his arm, but he’s not dead. Mysterio is super jazzed about this, saying he’s sure to get better rating than the OJ verdict (Hot, hot references in this era). I am not understanding Mysterio’s deal here. The DIT Chip has been established as a thingie that can create TV from his thoughts. Why does he need Spider-Man? He has cameras flying around catching all this, and switches “scenes” over to Ryker’s Island, but, like… If he really just wants ratings, who needs all these cameras? DOES he really just want ratings? This is a strange new motivation. Anyway…

Since we’re doing this all out of order, there’s a look at Guardsman, the guys who Sentry from The Jury based his look on. I question these robots’ incredible camouflage skills, but whatever, Armada is soon zooming across the sky with his “girls,” to go find and beat up Spider-Man. But we don’t follow him. This blog has already presented some questionable-at-best representations of black people under various writers through the decades, but Tom DeFalco is ready to show ‘em how it’s (absolutely not, under any circumstances) done! A couple teen members of “The Burning Blade” gang (Shout out to the Warcraft fans) named Jamie and Shakim are running from members of the rival “Jagged Skulls” (Why are they jagged?) and decide to split up as Spider-Man regains consciousness.

You never creep Jagged Skulls turf, that’s like rule #1. Someone who isn’t me should do a definitive list of all the fake gangs in the history of Marvel New York. The essentially one-armed Spider-Man drops into the Skulls. Even hobbled, he makes pretty quick work of them. However, the lenses Mysterio got on his mask make him see them as monsters, so he feels an added urgency. Mysterio is loving it, and calls in Armada for his “final confrontation” with Spider-Man as the hero meets Shakim from earlier.

WHAT IS THAT SUPPOSED TO MEAN? Tom DeFalco was 45 when this was published. I, your humble archivist, am a stout 40 as I write this, myself. I do not, by any means, consider myself an authority on the colloquialisms of the youth. But the difference between me and Tom DeFalco is I was a teenager in 1995, and he was 45 in 1995, and this is painfully embarrassing.

Other Skulls members find the guys Spidey beat up and decide to kill Spider-Man, and then Armada swoops in and offers to help. And then it gets worse. Not the danger, I mean the clueless old white man writing a black teenager.

I am slowly dying. The Skulls show up and start shooting. Spidey fights them, seeing monsters again, and then steals one of their knives and kills Mysterio’s camera bird. Then he gets shot at by lasers, exclaiming “I’m suddenly being blasted from various directions,” just like we all would, indicating Armada is here. The badly injured Spidey has trouble keeping up with Armada and his many robots, while Shakim meets back up with Jamie, who wants to kill all the unconscious Skulls for his rep. Spidey manages to stand up even under an incredible assault of I guess lasers or something, and Armada says he doesn’t like the extremely relevant TV show ER, because 90s.

The distraction lets Spider-Man go on the offensive, leaping onto Armada and laying down the law. But Aramada says his armor has been “secretly recharging” during the beating, so now he’s gonna win.

Mysterio’s lenses, of course. Spidey thinks he’s been a chump (I’m not sure he can blame himself for this incredibly goofy scheme). Mysterio is outraged that Spider-Man dared to rewrite the ending of “The World’s Greatest Showman’s” story, but vows to give him an even more humiliating ending. More humiliating than being killed by a jobber like Armada? Who’s next, the return of The Kangaroo?

Spidey finds Jamie and tells him nobody better mess with Shakim, mentioning he’s already told the Skulls, and then swings off for what he says will probably be “the fight of his life” with Mysterio. Uh… ok. Even this Spider-Man has fought some pretty grim battles with the likes of Doc Ock and The Green Goblin, but sure, the guy trying to run an evil TV network is gonna top them all. Whatever happens, we’ll see it together next post, along with me most probably gushing some more about John Romita, Jr. It’s all part of the service.