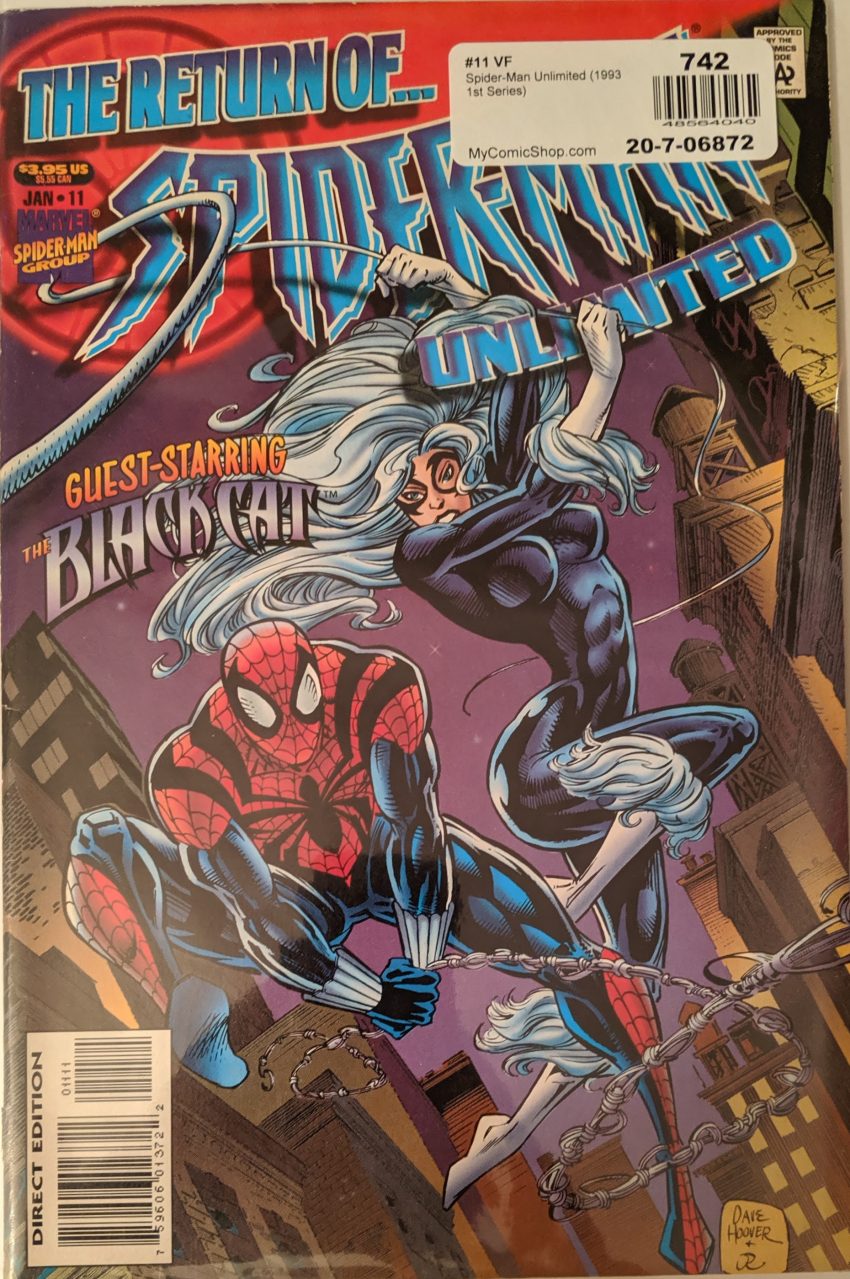 One more reintroduction to Spider-Man in this, the black sheep of the Spider-Family. This one’s courtesy of Fabian Nicieza, Dave Hooover, Joe Rubenstein and Tom Smith, and opens with Ben reading a Daily Bugle story called “High Society Murder!” Turns out, he knew the victim during his time on the road. He thinks that he sometimes tutored kids for extra cash, and one of them was her son.

Dave Hoover COMMITTING to the mullet, man. Like nobody has! Woof! Spidey’s off to see Ken Ellis, still the worst, but Ken himself is meeting with a Detective Marcella Cellanos, who we follow from the police station to the meeting in spite of the fact that she’s not in uniform.

Everyone in New York calling Ken Ellis a dork is totally right and good. But good grief, that Black Cat drawing. The 90s! Cellanos tells Ellis the dead lady had a bunch of cancelled checks to Felicia’s business, but she was apparently covered in claw marks. Ellis & Cellanos walk out together, saying they’ll get to the bottom of this… and then Ken Ellis walks out of the bathroom, having clearly just woken up from being knocked out. Soon, Cellanos and her partner are following Felicia’s business partner, Paul Proust, to a Russian Mob Bar in Brooklyn. It must be noted Black Cat has or maybe had her own series for awhile in the 90s, so that’s where all this PI and supporting cast business must’ve come from. I don’t know personally, didn’t read it. Proust doesn’t make any friends in there and then walks out and gets back in his car, the cops giving chase. But, as Felicia talks to someone named “Loop” on video chat… in 1995…

Isn’t it, though? Meanwhile, Ben Reilly is attending the wake for his old friend.

Yeah, that white guy was supposed to be Robbie. Whoops. This guy Jason is very nice and seems to be putting on a brave face for Ben, but as he leaves and says they should catch up, Ben’s Spider Sense has been buzzing the whole time. Later, at The Bugle, JJJ and Robbie tell Ellis he doesn’t have a whole story yet, and to get more info. And that’s when Ellis gets a phone call from Spider-Man telling him to meet to discuss the murder. On his way there, we learn Ellis suspects this Spider-Man is really The Scarlet Spider, since Spider-Man has changed his suit just as The Scarlet Spider vanished. Wow, I guess Ellis may be the smartest man in New York! Spidey meets him, and after some weird banter (Ellis says “Who does your look, Van Gogh?” WHAT??), Spidey gets down to business.

Where on Earth could Ellis have gotten that image? Did he have Bugle staff mock it up? So silly. Swinging to Felicia’s office, as he so often does, Ben questions Peter’s choices as Spider-Man. In this case, dating Felicia, which, you know, point taken. Outside a window at the office, he overhears Proust being told that Ben’s old pal Jason was in debt to eh Russian mob, but then…

During some really awkwardly posed pages where the two, I guess swing around? They mostly seem to be floating in circles around each other… Felicia lays out how it’s absurd that she’s being blamed for this while all Ben’s high’n’mighty talk about Peter dating her earlier goes right out the window as he stares at her, and then she reveals she’s already figured out he’s not the real Spider-Man. She says he would have been there for her when she’s being frame, and asks if she can say the same about this Spider-Man.

Felicia rubs her neck and mentions she was stung by a bee. Somehow, Spidey knows Ellis was knocked out and has a sore neck, too, and then Felicia mentions Proust had the same thing. Spidey asks if this could be The Chameleon, but Cat’s not convinced. Spidey suggests they team up on this, secretly thinking it’s to make sure she’s not guilty, which she calls him on immediately. Then they split up, with Spidey going to see Jason while Cat looks into the mob angle. Jason is talking to the chalk outline of his mom in a way that suggests it’s certainly not him when Ben Reilly shows up. Jason offers to walk & talk because he has to go downtown.

The Jason goes to see the Russians and talks to them in Russian about Jason like it’s someone else, and all this certainly is pointing to The Chameleon hard enough to make it seem like a red herring. Spidey notes an unmarked cop car following Jason as he walks out of the Russian bar, and wonders if the whole Black Cat thing was just a ruse.

To WHO now? Skull Jacket? Surely that’s not his real super-name. SKULL JACKET. Come on, 1990s, what are you doing?? “Your skull looks cold…”  As the sun rises, Spidey meets Black Cat to compare notes, but he still doesn’t seem totally convinced she’s innocent, so she leaves him to his own devices. Later, he watches as Detective Cellanos and her partner come to see “Jason,” unaware Black Cat it watching him watch them. The cops have a warrant, and as Castellanos partner stalls with “Jason,” she searches the place, finding used syringes and trash, and…

So… so this guy is… I don’t even want to try to unpack the pseudo-science here. Spidey bursts in and “Murph” tells him Jason shot at the cops, but then immediately opens fire on Spidey. Why bother with the disguise? And if his disguise depends on “RNA sequencing,” why did his Jason look so different from the real one? As he reveals his supersuit, Spidey calls “Skull Jacket” a Chameleon wannabe, which really upsets him. He says his countrymen of improved on the technology used to create the Chameleon (Except that he stopped being a Russian agent long before he could morph into people, but hey), and then Spidey takes him down with one punch. He even notes that was anticlimactic. Then he finds the real Jason, which makes him super sad. As the cops cart away “Skull Jacket” and Jason, Spidey is really depressed. Felicia shows up, and when Spidey says he feels like he failed Jason, tells him it’s not his fault, while both of them lay out for us that Jason plotted to kill him Mom for his inheritance so he could pay off the Russians.

No idea how she figured out his name. Not one. Even if she’s a PI who knows the real Spider-Man’s name, it doesn’t make any sense. Aaaaalso, Felicia never wanted to see Peter with his mask off, and now takes Ben’s mask off. /shrug Whatever. Weird story. Very “gritty TV police drama,” only with Spider-Man. This is followed by a short, strange and exceedingly grim story by one Adam Satangelo and Sal Buscema which follows a small time hood with a wife & kid on his way to a gig and Peter Parker suiting up to go do his Spidey thing (We’re told this takes place before Ben took over). How Spidey inevitably stops the job the guy is on, how the guy begs to be let go for his wife & kid, and how Spider-Man goes home depressed and the hood’s wife cries because he doesn’t go home at all. Sheesh. But, at any rate, we’ve seen how each title brought in the new Spider-Man. Now it’s time for the Mysterio plot to move to the forefront.