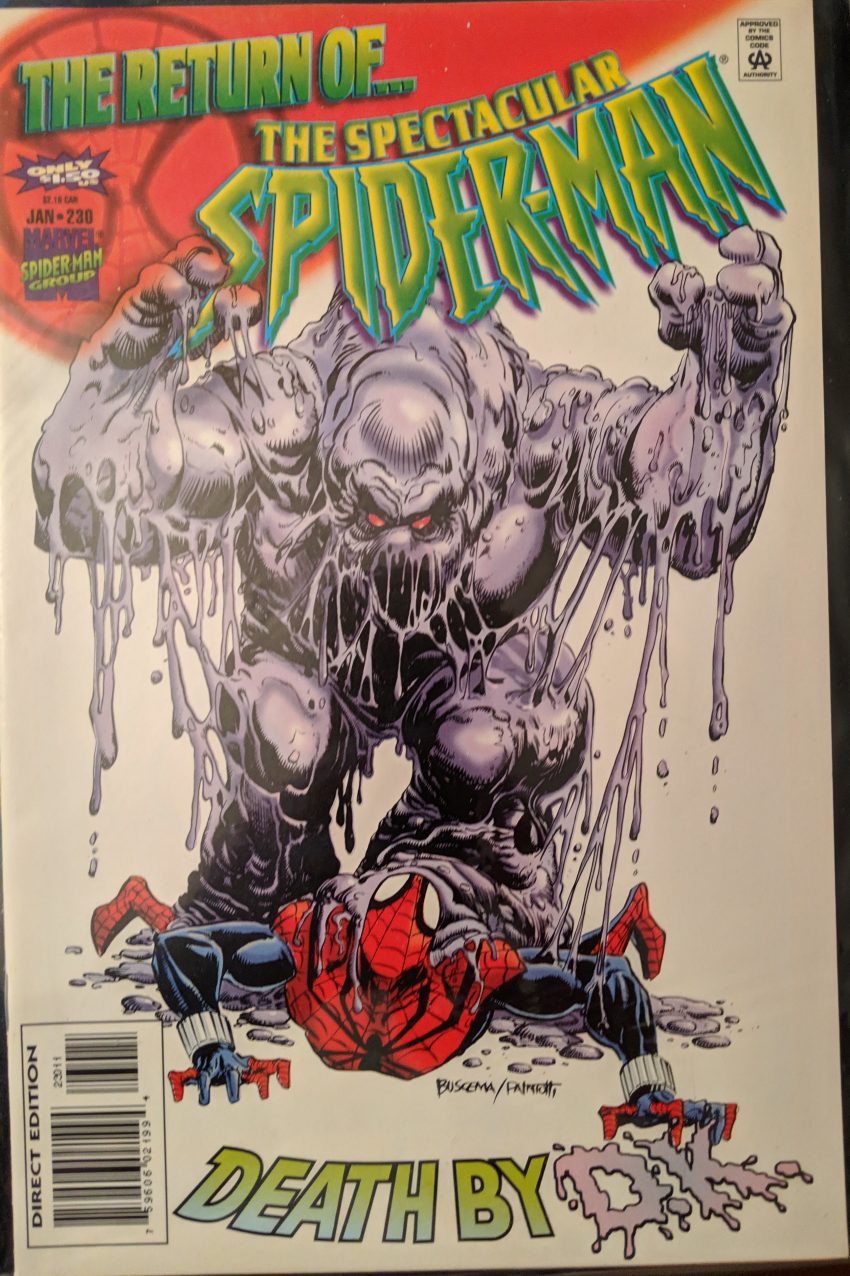 I’m guessing “D.K.” doesn’t stand for Donkey Kong, but I don’t remember this issue at all, so who knows? In this era of TAC, Todd DeZago has taken over fully from previously scripting over many of Tom DeFalco’s plots, and Sal Buscema is still kicking around, still being colored by John Kalisz, now inked by Jimmy Palmiotti, which is certainly not a match made in heaven, as we shall see. A lot of familiar faces as we seen how the last of the monthly Spider-books allows Ben to reintroduce himself. Not yet, though, as this tale begins 2 months ago, with 2 “environmental consultants” looking to catch a chemical company in the act of polluting. They flashback to how they inspected the plant and it was fine, but how the owner seemed nervous about them inspecting the grounds. So now they’re out on said grounds seemingly late at night, looking for evidence, and they find it in a big lake or other such body of water turned black by dozens of cartoon oil barrels.

That’ll be your origin for “D.K.”  We jump to the present day now, to see a euphoric Ben Reilly enjoying his new life. I want to post this first, though. For a couple decades, Marvel Comics would have a box on the title page explaining the hero in broad strokes in case this is your first issue. They really want you to know this is the REAL Spider-Man, while also having to deal with the fact that he goes by a fake name, and this is what they’ve come up with:

The whole “trying to explain that he uses a fake name like it’s no big deal” thing does not work, man. Anyway, Ben’s reveling in his Spider-antics when a chair flies out of a skyscraper.

ILL, you say! This is getting embarrassing. So this muck monster traveled from whatever rural place it was born in to New York? Ambitious. Spidey tries to web the thing, but it dissolves his web on contact, and then touches a door, causing the whole wall to start to melt, so he’s gotta web up the ceiling until people can escape. The creature he has dubbed “Gukthing” has escaped by the time that’s over. We stop by The Daily Grind to see Devon so transfixed by TV that he can’t hear his Mom telling him about his good grades, just in case you forgot about that Mysterio plot, and then we jump ahead to night time, as Spider-Man is staking out the Sanders Chemical Corporation from the beginning waiting for the monster. So… where is this place? Is it on the outskirts of the city? The geography is a mystery.

You read comics long enough, you begin to get a feel for how characters “talk.” Especially before 2000, writers strove to make sure they seemed consistent, though they were not always successful. But… this guy does not talk like Spider-Man, Ben Reilly or otherwise, and Todd Dezago’s attempts to make him seem cool are making Tom DeFalco’s look positively natural. Maybe this is gonna be painful, after all. Inside, “D.K” attacks, and soon Spidey comes in through a window. He notices the thing is able to turn his dissolving touch on and off, and thus thinks maybe he can reason with it (I am not following his logic).

Yeah no idea on the reference. The thing continues to accuse Sanders (Who is never given a first name) of his crimes, we cut to security finding the stairs melted and unable to help, and then…

The slang in the comic is going to kill me dead. He tackles the dude out the window, webs him to a flagpole and tries to convince him he’s got Sanders with that taped confession and doesn’t have to kill him. Why did he bother with the confession, anyway? But as Sanders begins to flee the scene, the guy goops back up, and says “There’s nothing left of David Kalen anymore — except maybe his initials!”

So D.K. is literally his supername? Like… what? DK says he’ll go through Spidey to get to Sanders, but when Spidey puts that to the test, the fight goes out of his gooey foe.

All’s well that ends well, I guess. Man, this ten-years-too-late cool guy talk is going to be harder to deal with than Peter Parker being replaced! But, at any rate, we’ve seen how each title brought in the new Spider-Man. Now it’s time for the Mysterio plot to move to the forefront.