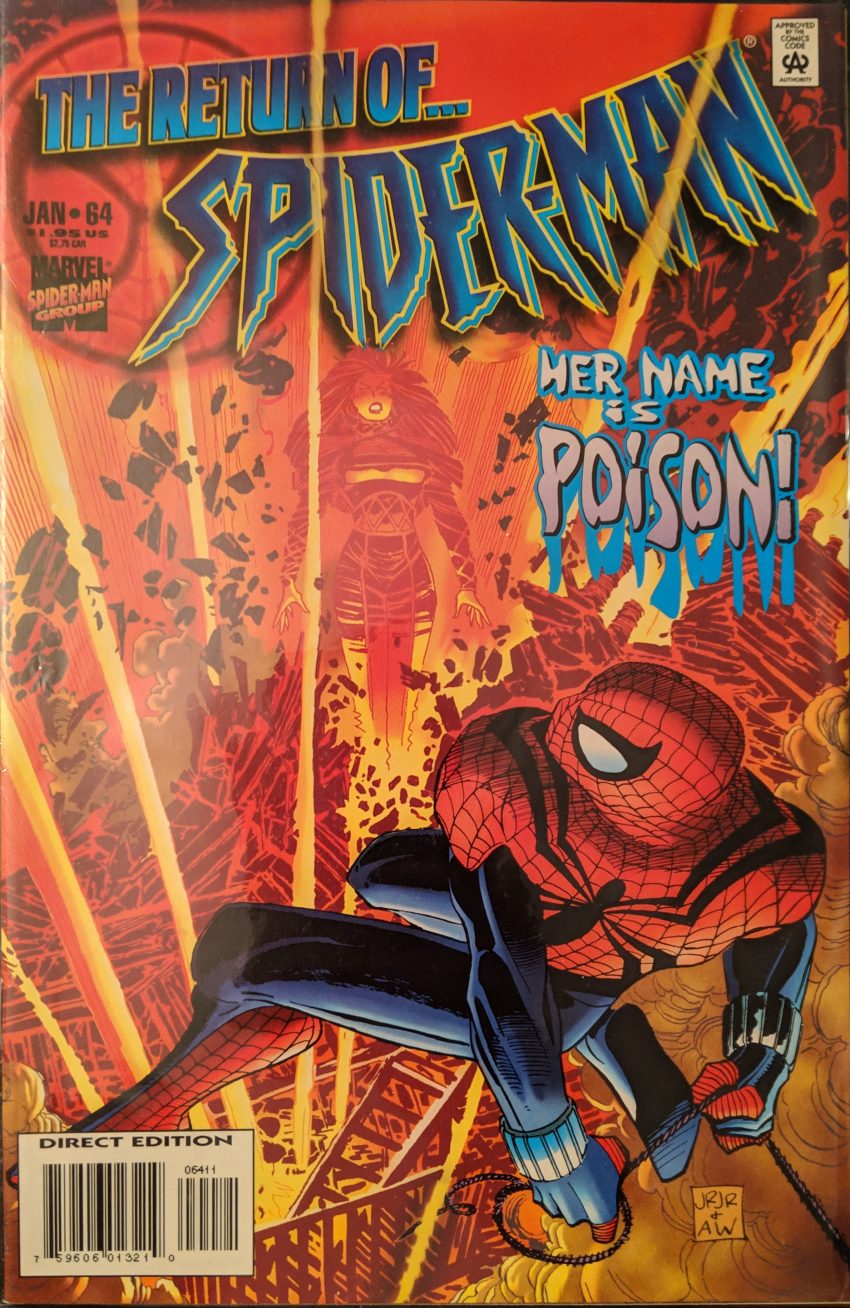 Awwwww, yeah, it’s John Romita, Jr.! And if you’re not familiar, you’re gonna be shocked by how much his art has changed since his last appearance on this blog. He’s now totally on his own wave. Nobody draws like him. His stuff is stylized, angular, and remarkably 3D for being just ink on paper. His talent for giving his characters weight and mass is second only to his ability as a storyteller. And in this run, he’s inked by the legend, Al Williamson. Al is a masterful draftsman in his own right, and an old pro in the biz by this point. He inked John’s crucial run on Daredevil, where he really evolved from the type of stuff previously seen here to this. Al’s incredible adaptation of Return of the Jedi had a huge impact on me when I was very young. In this particular issue, Williamson gets a hand from Dick Giordano (Another recent transplant from the Superman offices) and Al Milgrom. He and JRJR make a spectacular team. But this isn’t TAC, this SM, so that means Howard Mackie is still on scripting duties. This has been his corner of the Spider-Verse for years, and will be so until the books are all relaunched. Kevin Tinsley is still the color artist, too. And I haven’t mentioned it yet, but these books all feature credited digital color separation by staff from the recently acquired Malibu Comics. That’s a weird story. The tiny upstart Malibu actually helped get Image off the ground, and once Image was flying solo, Malibu’s profile was significantly raised. They attracted some pretty big talent and launched their own superhero line, but it never achieved anything like Image’s success, and, if legends are true, Marvel bought them just to get access to their color department. After some perfunctory Marvel/Malibu crossovers, their IPs never really saw the light of day again. But that’s off-topic, so let’s get into this! The issue opens with Spider-Man giving a child CPR, which is certainly different.

You see how he switched hands the 2nd time he pumped the kid’s chest? The attention to detail. As the kid’s being loaded into an ambulance, a reporter wants to know why Spidey disappeared for awhile and who The Scarlet Spider is and various things, but the kid was mumbling about his mom still being in that building, and that’s all our man cares about.

The lights in that top panel? Come on! We are running a real risk of this just turning into a John Romita, Jr. fan blog. Look at that INTENSELY 90s dude, tho! Peak 90s. Back at the scene, Spidey somberly watches the building burn, wondering if he could have done more. The reporter comes back to try to get more out of him, but then the building collapses and he has to save her while also catching debris with his web. But he’s Spider-Man, so he can do that. The reporter asks him what he’s doing after the fire, and then Carlos’ Mom appears hovering over the flames, demanding to know where he is.

We’ll see that WEB Annual some day, but I’ve not actually read it yet, so I got no info for you this time. Spidey webs the camera and the microphone of the news team and then listens as Poison makes him promise to keep her son safe. The next day,  Ben Reilly is watching that reporter on TV with her footage, explaining that Poison is a Miami-based fighter of drug dealers, whose reasons for being in New York are unclear. Then the kid at the coffee shop, Devon, jumps in his view.

He asks Buzz what the paper says about Poison’s son, but it doesn’t mention him at all, which seems odd. Elsewhere,  a rich person called “Paris Scott” has a phone call in which he says someone has “made a play for one of his recruits.” What’s that mean? Too late, we cut to Mysterio… buying a cable news channel. I don’t remember this scheme, but maybe he’s founding Fox News.

He’s off to visit Poison at the hospital, and she’s insane with rage over him not keeping her son safe. Spidey learns the kid never made it to the hospital and the ambulance was found wrecked. Spidey leaves, and then a rep for that Paris Scott guy shows up.

The rules of the game, eh? The ringing phone is El Toro Negro, who apparently tells her to do something to save her son. El Toro Negro was juuuuust introduced I guess last month, actually, in Amazing Scarlet Spider, so Spidey knows him and wants to help, but Poison’s not hearing it. She flies off, but Spidey follows. Soon, Poison’s ripping her way into a warehouse, and inside…

Oh, right! Ok. Poison signed up for The Great Game, wherein rich people get powered people to fight and/or do other hijinks for their decadent entertainment. Man, I forgot about this. Ok, so Black Bull wants her spot on Scott’s roster, so his terms are she calls him up and rejects his offer. She does it, and then Spidey bursts in, saying she can’t trust El Toro.

Never trust a big butt and a smile! She charges him into some crates, and he’s not really fighting back, because this is a mess. Also, he thinks she’s kinda cute. She’s about to kill him, but Carlos begs her not to, says he saved him from the fire.

Spider-Man is disintegrated into a pile of ash! The end, folks! Poison says it’s over, that she couldn’t summon another blast like that, anyway, but El Toro Negro says she can’t be allowed to live, so he’s gonna kill them, anyway.

And there you have it. Romita, Jr. has a lot of distinct, visible phases in his evolution. I would call this about phase 6. It was during his long run on Daredevil that his stuff first completely emerged from his father’s shadow (phase 3), and then quickly became more abstract and unmistakably his own (phase 4). And during a stint on Uncanny X-Men, he entered phase 5, his response to the 90s I think, where everything got bigger, blockier, and also rougher and more sketchy. And by this point, he’s in phase 6. The blockiness of the early 90s remains, but the line is getting cleaner, there’s less noodly detail. This is the buffest Spider-Man he’ll ever draw. In fact, in just a few short years, he’ll be going the other way, rendering Spidey as a really scrawny guy. He’s a pretty divisive artist, I guess. But the division kinda tells you who you’re dealing with. Romita is an Artist’s Artist, a true master of the form, constantly pushing himself. More casual fans want something more in line with whatever the norm is in a given period and very vocally hate him. More serious fans and most pros adore him. Which side are you, on dear reader? Are you on the wave? I hope so. I love this man, and he’s gonna be aaaaall over this blog by the time I finish, his history with Spidey is significant. Memorable work in every decade from the 80s to the 2000s. The only reason it stops there is a shocking defection to DC in the late 2000s, where he’s still working today. I could talk about him all day, but that seems like enough for this post.