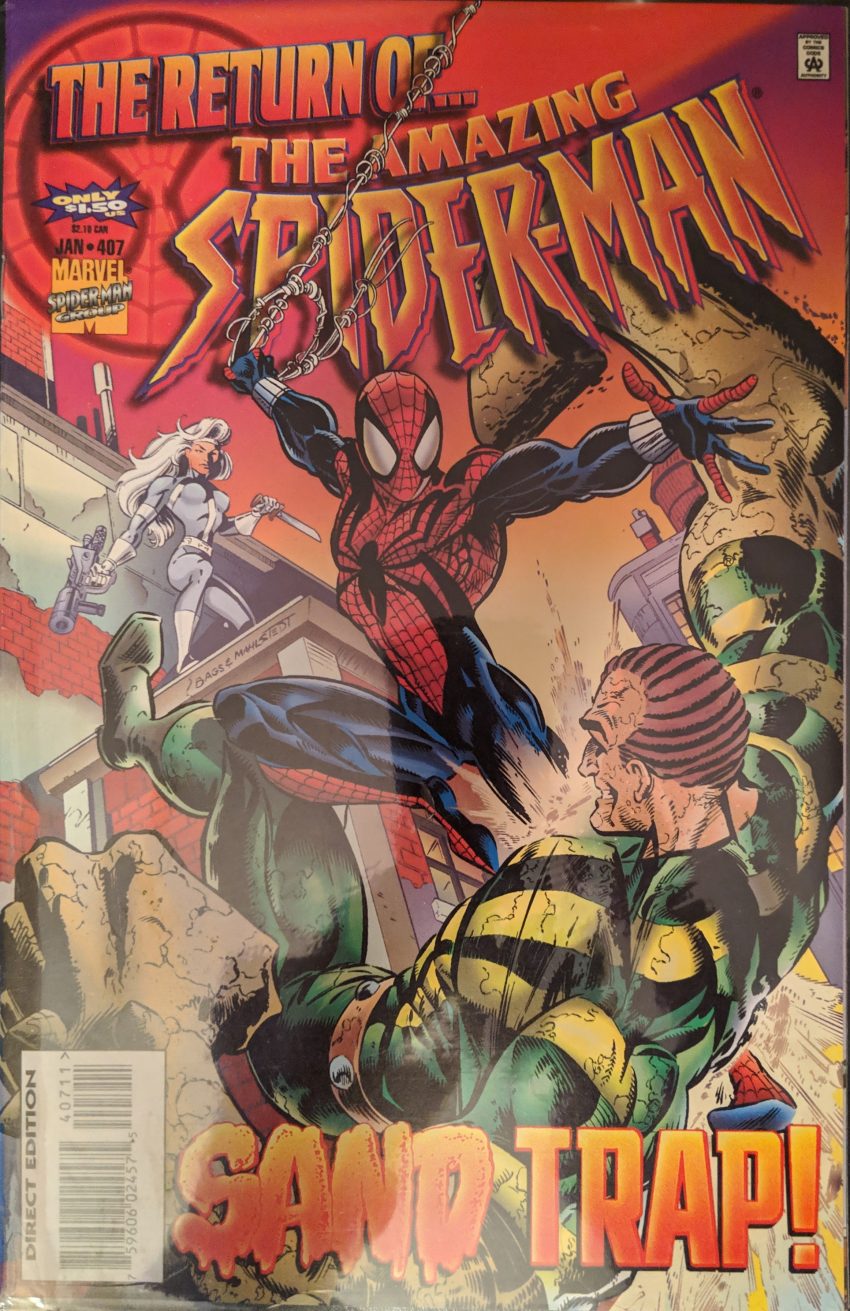 This is the last time jump. The creative teams on the books will continue to shift to varying degrees, but the writer taking over ASM with 407 sees it to the end of Vol. 1. Who might that be? Wouldja believe… Tom DeFalco again? He’s not E-i-C anymore (That title belongs to Bob Harras at this time, having formerly made The X-Office into Marvel’s sales juggernaut, pun very much intended), so he’s got time, and he clearly loves writing Spider-Man. As much as Mark Bagley clearly loves drawing Spider-Man, as he’s been on for 55 issues, at this point (Plus the two dumb Amazing Scarlet Spider books that immediately preceded this issue). Larry Mahlstedt and Bob Sharen, another guy with a long, long list of Spidey credits, are still here from last block, too, ASM’s art team is still solid. Mark designed this new suit, but I have forgiven him for that.

DeFalco opens this with a not-at-all-subtle callback to ASM 252, beginning his second first issue of ASM with Spidey in a new suit with JJJ and Robbie discussing the day’s Bugle headline.

(We’ll see that issue of SMU eventually) Yeah, uh, MJ was pregnant when they rode off into the sunset. I wasn’t gonna mention that if I didn’t have to, but there it is. Check out all the lingo on Torch! Did his “homeboy” try a new look, or has some one “copped” his gig? That wouldn’t be very fresh of them! Meanwhile, at The Daily Grind, Ben Reilly’s at his first day of work, and it is REALLY rooted in 1995:

HOOTIE! Ben recaps how he used to be Peter Parker but now he’s Ben Reilly (I feel like you’re only making the audience ask more questions if they don’t know what happened rather than answering them), then Desiree Winthrop blows in saying The Torch’s message to Spider-Man is “to die–!” She’s gonna be fun, huh? She and some others discuss the ins and outs of superhero fashion as Ben comes to take their order. She recognizes him, and tells him he cleans up real good and his hair is “totally fly!” I mean… He has dyed his hair so no one will recognize him as Peter Parker, and yet this lady who doesn’t know him and saw him for a minute yesterday looking like a hobo instantly recognizes him. Clark Kent’s glasses, this dye job is not. Anyway, he’s smitten with her, but he’s also interested in this Torch thing. Should he go see him? What was his relationship with Peter? Tough questions. From there, we jump to the US embassy of the awkwardly named fictional country Symkaria, home to the mercenary and frequent Spider-Man guest character Silver Sable (Introduced by one Tom DeFalco back in the 80s). She took up leadership of her dad’s gang of Nazi hunters, The Wild Pack, and has expanded their purview to hunting all sorts of people. Their activities are a major source of income for her tiny nation, if you can believe that. And these days, her most prized employee is The Sandman, if you can believe that, also.

Why is this happening in New York other than it has to? That dialogue suggests these guys are all Symkarian nationals. Am I overthinking this? Sandman takes them all out in 15 seconds, saying they show potential. Silver wants to know what he makes of the Bugle’s Spider-Man headline. Silver decides they should see if this is a new Spider-Man since the old one has been useful to her in the past. Alright, then. The stage is set. Torch flies to meet Spidey…

Torch burns Spider-Man to a crisp, the end. No, really.

So are we to assume Mysterio’s simulation included the Symkarian spy, or can we just go ahead and call that some extremely crappy storytelling? Of course, old timey Spidey fans know “the usual place” is The Statue of Liberty (Which is weird, since it isn’t the easiest place for Spider-Man to reach), so that was a clue. Ugh. So cheap. Anyway, guess Mysterio is planning to start a TV network? Aaaaalright. I don’t remember this at all, I confess. Ben visits a friend in the hospital, and I don’t even feel like getting into that, honestly. I don’t think it will be relevant. Then he goes for a walk.

“How’d he stumble on our meeting site?” Well, Ben, if you’d read Spectacular Spider-Man 42 during your exile, you’d know he’s known about it for a long time. Anyway, in a few moments, Spider-Man is on the scene. He bumbles through trying to be intimidating and not intimidating, just in case, but he messes up saying Sandman and “the blonde cutie” need to back away from the ferry.

Elsewhere, that Jessica girl from SSM 0 develops her photos of Spidey, and a friend suggest she try to sell them to The Bugle. Back at the fight…

He’s more LIGHTHEARTED, GUYS. Did you notice? Did you notice how we spent years making the real Spider-Man an unlikable mess so you might embrace this Great Value Spider-Man as a return to form??? Is it working???

Torchie zooms in and frees Spider-Man from Sandman’s grip. Sandy gets so riled up he’s ready to fight both of them, reformed or not, then Silver shoots in the air to stop the fight.

This constant need to remind you that he’s the real Spider-Man, as if to say, “See? We’re FIXING this, not breaking it!” is already wearing thin after 2 comics. And it’s all gonna seem pretty silly when they’re forced to reveal he’s actually NOT the real Spider-Man. But that’s for later.

Well, then. Again, you know this is fine. With the burning hatred for this entire notion drained out of me by time, these things are just… fine. Not really remembering them from the old days, it mostly feels new to me. I recall some of the big moments and twists, but I doubt I’ve opened any of these since the day I got them. It’s sad that I own them at all. I hated every second of this, and yet I spent so much money on it. I was 17, at this point. What a fool I was.