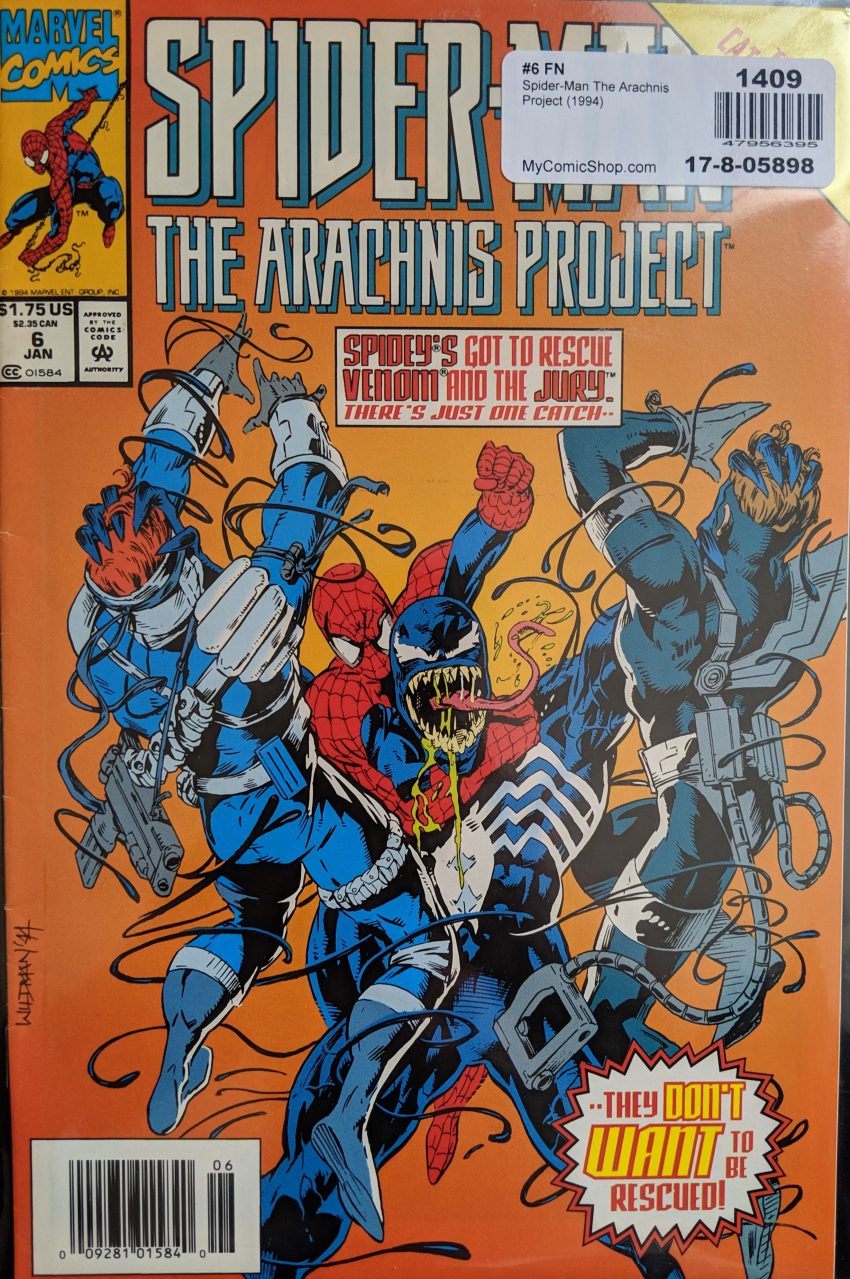 We are almost free of the endless torture that is The Arachnis Project. So. The Jury wants to kill Venom. Venom wants to kill the Jury. Spidey wants no one to kill anyone. They’re all in a bunker that’s about to explode. Presumably, the Drake monster is still running around. GUNPLAY and Sneak Thief are probably still here, though I haven’t seen them on the first 3 pages.

Spidey’s appeal to The Jury’s reason is pointless, and Venom won’t listen, either, so Spidey says we have to get this innocent kid, Miho, out of here. We see her crying against a wall. They sure did turn her into a damsel in distress for no reason. Venom is totally on board with saving innocents, which allows The Jury to shoot him in the back. Honestly, Spidey should just leave all these idiots here to die. Venom says “Hoo-ha” again for SOME godawful reason, Miho decides to buck up and start killing people to “avenger her father’s good name” (Not sure how this will do so), then we cut to Treece, The General and Screech, as Screech walks out on them to go help The Jury.

Ramshot finally zaps Venom in the face, which is somehow enough to take him down? He shot him with the same zaps earlier and it did nothing! Ugh, almost done, almost done… so, Venom’s unconscious and everyone else agrees it’s time to go (Where did Sneak Thief go?), so naturally the Drake monster comes back. He has begun to grow some more arms, so at least he’s a little spider-like now.

Oh, so it’s Spidey’s position that 8 limbs like a spider is just a coincidence of the radiation, got it. Almost done almost done… I know this will come as a shock, but the destruct countdown was at 15 minutes in page 1 and is at 10 minutes on page 13. Time is a construct, man. The zap is Screech, of course, heroically flying for the rescue. Sort of. Some of The Jury say they are cut off from the battle by “the fire” now (When was there a fire???)

Well, nothing about that made a shred of sense. Whipping the camera around 180 degrees didn’t help. Where is this alleged fire now? The guys “cut off” by it are just walking up like it’s all good, and seem to be coming from behind Drake, who seemed to have the roof fall on him, but we can’t know, because Wildman didn’t bother to show it. Almost done almost done… Oh, look, there’s Sneak Thief down at the bottom. She sure helped. Venom wakes up and doesn’t even care about The Jury anymore. He just wants to die fighting Drake, it seems, because it will be worth it to avenge all the innocents he’s killed. I feel like Drake’s next line here is an audience insert response:

So, Spider-Man and Screech go back to try to save Venom. Screech says he’s learned a lot today, particularly from Spidey. They find the 2 monsters fighting some more. Then they hit something or other and a fireball erupts out of the wall, and… Drake is gone or something? And Venom said his work here is done and uses the symbiote to go into “stealth mode?” So Spidey and Screech just LEAVE?! I feel like most of this issue is just killing time. Like they couldn’t wrap this in 5 issues but also didn’t really need 6. Everyone gets to the escape hatch, but the key hole is broken, so Sentry can’t open it. So Spidey just rips the door off. Anticlimactic. And THEN Sentry “remembers” the hallway is lined with motion-activated lasers. Bad thing to forget! Screech decides to fly down the hall to shut them off (Why would the controls be on the exit side, you stupid, stupid comic book!?).

Sigh… Sneak Thief suddenly remembers her only superpower is being invisible to security systems and just walks down there and shuts it off. I want to again point out that this system designed to keep people out can only be turned off from the side they would be entering from.

Does Spidey know Mikashi is dead? If so, how? Show your work. In the sky, Uncle Sam sends fighter jets to head off Treece & The General, so don’t worry, they don’t escape. The General seems resigned to it. Assuming his son is dead seems to have taken the wind out of his sails after all.

Spidey swings off, thinking he has to follow his dreams and be good to his loved ones in honor of Mikashi, full of hope that he will not be carrying to his actual comics books, and then…

He won’t, tho! This series is the final comics appearance of Carlton Drake. Also of The Life Foundation, Sneak Thief, Miho, Spoiler and Warrant. None of this goes anywhere. The Jury would appear in the future, but not in Spider-Man comics. Somehow, I’m told USAgent, formerly the new Captain America we saw in TAC 138, ends up leading them briefly. Huh. Well, that’s somebody else’s problem. This thoroughly unenjoyable comic had nothing to do with anything, and the Spider-Man portrayed herein had very little to do with the guy we saw in the previous comics of this era. Ugh. What a mess. I think all these are going to McKay’s. I don’t feel the need to own them.

In this block, we covered 28 comics, and only got 5 issues of ASM. To say the Spider-Man line was out of control would be an understatement. You’ll find not much has changed as we make our next time jump. And yet… everything has changed.