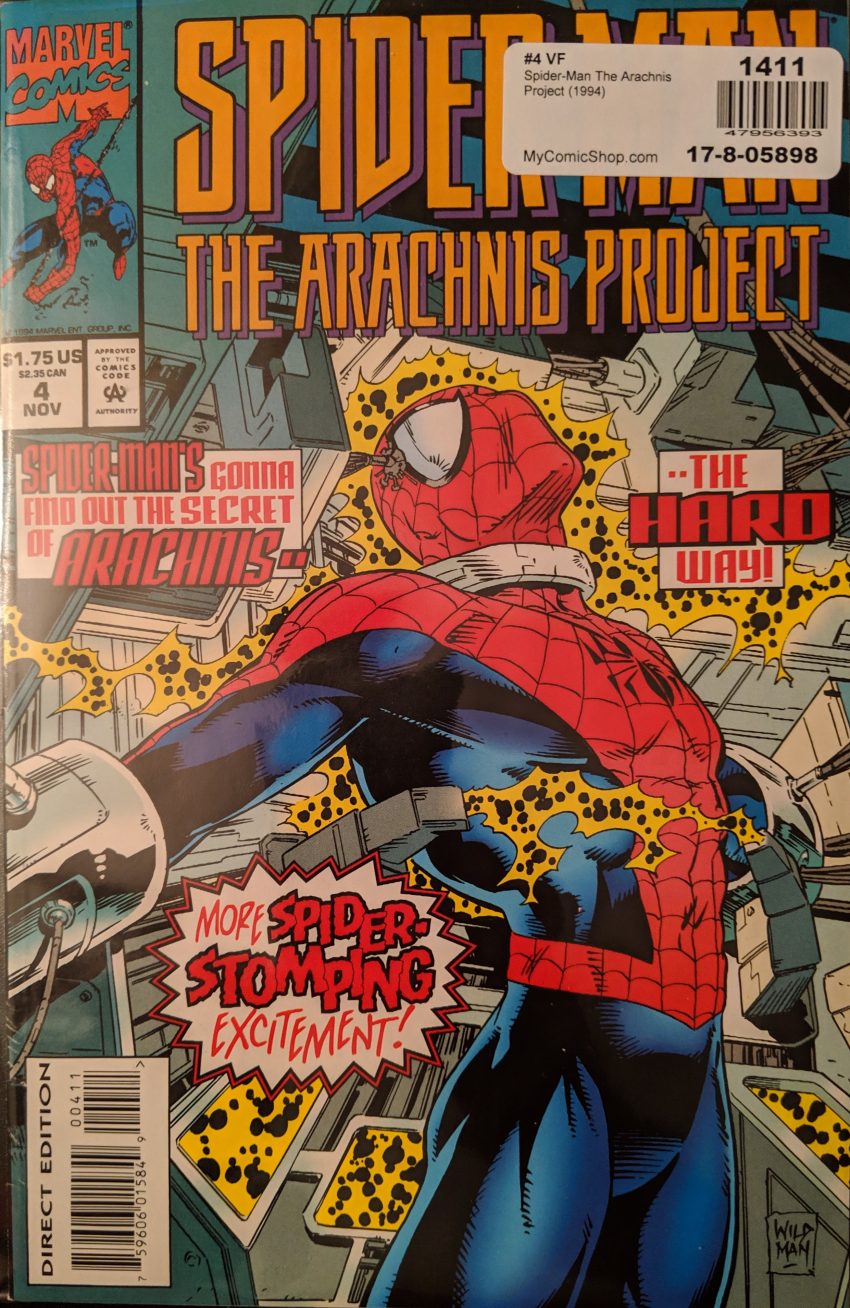 It’s pretty interesting to see Wildman’s relatively clean covers vs. what his work looks like all 90s’ed up by Baskerville on the inside. Stephen Baskerville is like the “Just add 90s!” of inkers. “Now any penciler can have a billion little pointless hatchmarks all over everything like the celebrities!” It’s 4am again, because nothing happens before 3am in this comic, and the captive Spider-Man has been hooked up to some machines. They’re gonna try to use his unique biology to perfect The Araachnis Project, though how that will work is not discussed. Meanwhile, Sneak Thief escapes her holding cell, and I bet Wildman & Baskerville alike are really cursing the story requiring her to be barefoot all the time given the general weaknesses of artists in this era. Now it’s… wait, now it’s 2:15 am. What? Is time going BACKWARDS? What is with these pointless and nonsensical time stamps!?

The Jury is then hassled by the men in black and balk at their treatment, prompting Screech to tattle to daddy and suggest they start looking for new members. Elsewhere, some much needed exposition is being rolled out…

Drake trots out Miho as leverage, and then says he intends to be the first of “homo arachnis.” Ok. Now it’s 10am, and Venom, I mean the mysterious figure’s plane has landed. A purse snatcher is mysteriously stopped by being webbed to a wall and killed. Golly, who could this be???

Friggin finally. By now, Venom has started talking about eating people’s brains all the time. For some reason. Look at that comically huge shoulder. Not sure if repeating this image of Spider-Man from the first issue and changing it to Venom is clever or lazy. Oo, speaking of the ostensible main character, he’s still trapped, so don’t expect anything interesting from him. Mikashi manages to talk them out of performing a lobotomy on him, though, so that’s nice. He says the treatment will be ready for Drake in an hour. They put Miho in a cell and, since they don’t think they need Spidey anymore, they plan to just kill him.

When the other guys tell Screech this is stupid, it’s treason, but he has no problem saying it himself, got it. Elsewhere, The Jury decide killing Spider-Man is wrong, and finally have the balls to quit, but they’re extremely dumb, so as they plot against The Life Foundation in suits provided by same, they are set upon by men in black who tell them they’ve been bugged the whole time. Uh doy. In another part of the compound, Spoiler is dragging Miho to a cell when he gets a summons to come fight The Jury, giving her a chance to kick him in the gut and book it.

Spidey and The Jury have both taken to calling those guys “dark suits,” so I guess when in Rome… The General is walking down the hall talking to Treece about all this when Spider-Man finds him. Elsewhere, Spoiler shows up to fight The Jury, decides this is a losing game, and runs away.

It’s all going crazy, I guess. Drake is about to die, and Treece has decided to let him so he can take over. Miho rather inexplicably darts through a firefight unscathed and runs into Sneak Thief, who says “we sisters gotta stick together.” There’s an awful lot of factions running around this place. Spidey threatens The General til he tells him where Miho was last seen, and webs Mikashi’s wounds to try to keep him alive, and then dark suits run in.

And finally, Spoiler flies to Drake’s office, intent on getting paid before he quits, but the door opens and we’re told “Drake is dead…”

That doesn’t look like any spider I’ve ever seen. I feel like this might not be scientifically accurate. Well… Come back next time for still more of this nonsense. You know, when I got the first 2 issues at McKay’s, I thought this was a 3-issue series. Another mini, Web of Doom, was published right along side it, and it was only 3 issues (It explicitly says it takes place before ASM 389, so we aren’t looking at it yet). I don’t know if I woulda bought in at all if I’d known it was 6.