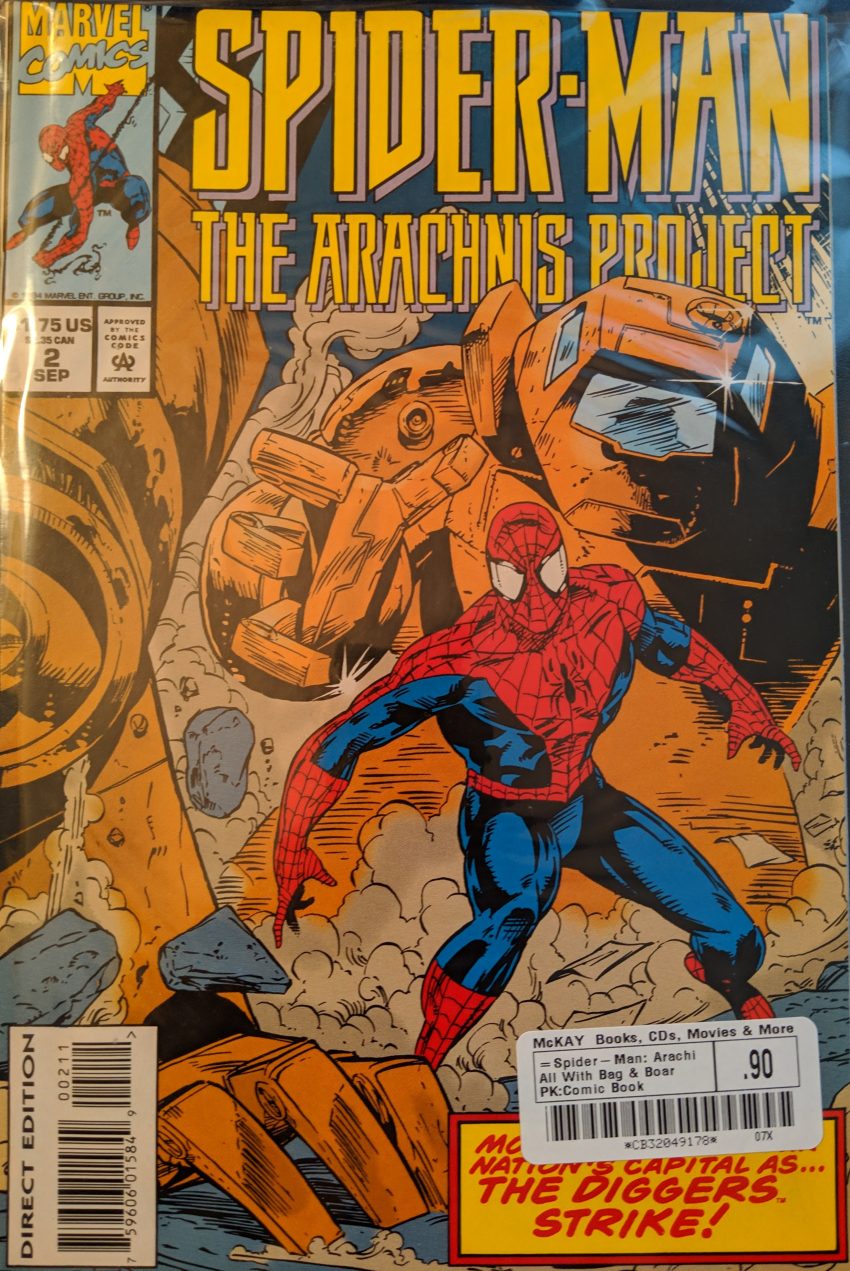 Some really hideous treatments of Spidey’s mask in this uncivilized age. Not that any of last issue was any better, but this cover is even worse. Look upon your works, Todd McFarlane, and despair. The opening splash restating what happened in last issue’s final page splash is followed by a 2-page splash essentially doing the same thing, because 90s. Then something finally happens.

Spider-Man spent 1 page of last issue and 3 pages of this issue fretting about how to get Sneak Thief out of here when she’s webbed to the floor. He looks like a real goof now. Also: Padded? Back inside, a lot of generic tough guy dialogue is exchanged, and then Spoiler shoots Warrant in the shoulder. Always in the shoulder. Spidey shows back up, and Spoiler shoots a grenade at him, which he redirects with his web to somehow collapse the side of the roof without bothering him at all? He is in the room? I don’t know.

Spoiler escapes, Warrant escapes, outside, Sneak Thief escapes, and Spidey’s left talking to the cops. What a night. Sneak Thief steals a car, but Warrant is flying after her, and forces her to crash so he can catch her.

Some kinda dialogue in this book. Warrant and that guy call each other names a bit, then Spider-Man… says some stuff? He’s not even here. He’s back at the scene of the fight. What… what? Then they’re putting Sneak Thief in a van and she’s getting off a bunch of weird one liners, and then Spider-Man senses trouble and is suddenly in the same location, and then…

SERIOUSLY, officer? THAT’S your reaction? My God, Magnum. Some reporters show up. Sneak Thief asks them for help, but the camera man legit says they “took an oath of non-interference,” and then Spider-Man gets involved, webbing the news people out of the way before the big thing can crush them. Across campus, Professor Mikashi is looking for that disk Jerry had last issue, only to have the men in black come back and reveal they took it while murdering him. They threaten him some more and then leave, but not before Mikashi points out they’re not from the government. Where that they from, then? I suppose we’ll find out.

That “laser pen” sure is handy. The big thing, referred to as a “Digger Unit” (So creative!) is ordered by its homebase to retreat, and does so, Sneak Thief still in hand.

The dialogue in this book is just mindboggling. “Uhhhhh, okay!?” We then check in on The Jury for the first time this issue, and learn they’re in an underground bunker somewhere, hired out to the same secret society Sneak Thief & Spoiler work for, though they don’t know why.

Is there anything more tiresome than someone in a comic book saying “this ain’t a comic book?” As that guy gives a big speech about taking out Venom, a mysterious figure who is SO CLEARLY VENOM in San Francisco sees Spider-Man fighting the Digger Unit on the news and decides to go to DC, too, saying Drake and his buddies have moved to the capital. Well, there you go. The “secret society” is The Life Foundation, still a thing, and more recently Venom’s thing rather than Spider-Man’s. In DC, Spidey breaks into the medical examiner’s office to read the report on Jerry, and then decides he needs to go visit Mikashi, finally.

The proportions on that house are hilarious. Why would he go there at midnight? Nothing in this book makes any sense.

Thanks for all the exposition, Professor! Peter realizes they’re about to be attacked, but too late. Gas pours into the room, this ridiculous bit happens…

(Love that description as he’s zapped)…and then the men in black are here, one of them intending to kill Peter while the other takes the prisoners away, and it’s To Be Continued. An ad on the back cover is trying to gas you up to spend a lot of money on baseball cards as an investment. Comics and cards were on a similar trajectory of pretend value in this period, from what I understand. The speculators who swooped in and believed them nearly destroyed both industries, but they only did what they were asked to do.