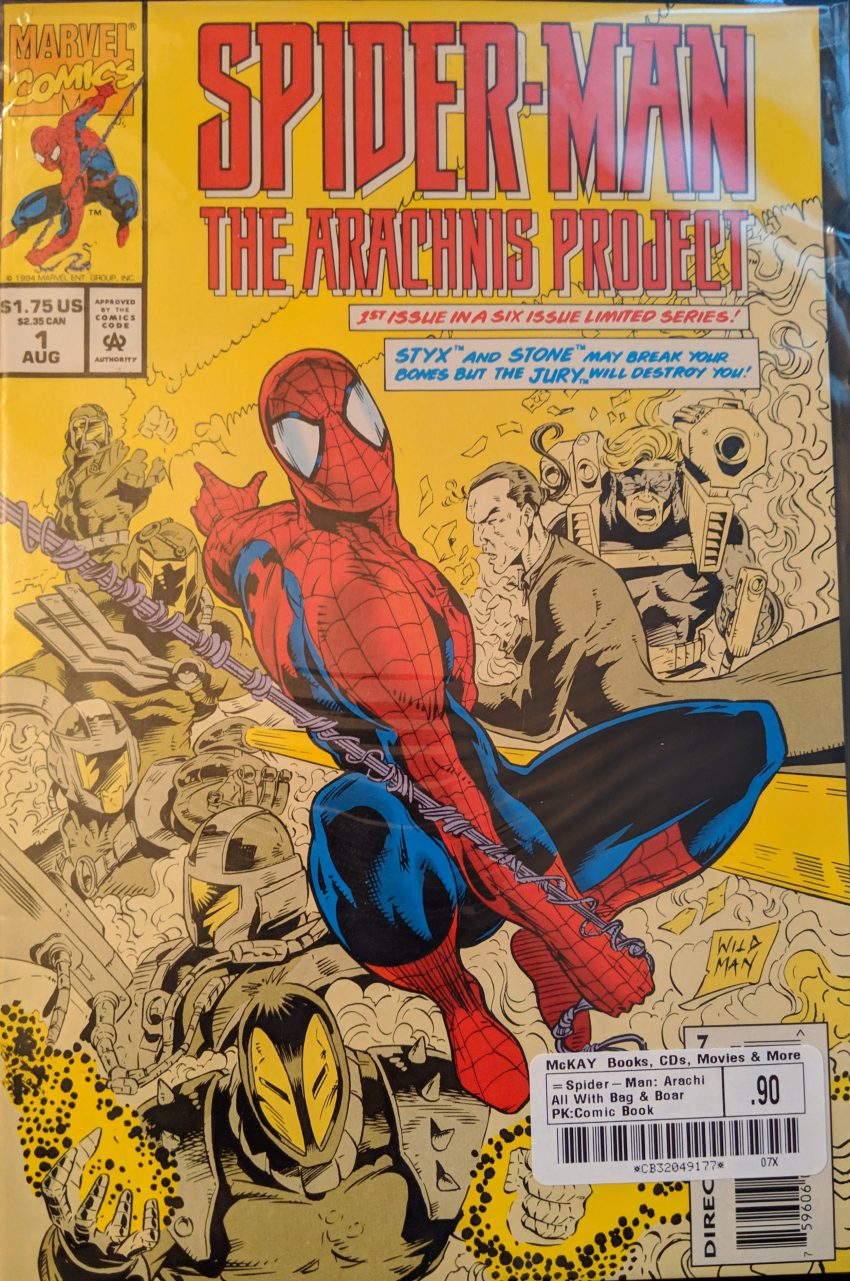 This begins a 6-issue miniseries at a really awkward time to do so. This first issue was published the same month as WEB 115, ASM 392, SM 49 and TAC 215. Post-Aunt May’s stroke, post-“The Spider,” 2 months before the dreaded crossover. With Spider-Man’s sanity in various states of decay depending on which of his monthlies you’re reading, why add yet another story in there? $$$, that’s why. I genuinely have no idea when this should be happening. This whole series is new to me. I guess I’ll figure it out as we go. On deck, we got writer Mike Lackley, breakdowns by Andrew Wildman, finishes by Stephen Baskerville, and colors by Chia-Chi Wang (Incorrectly credited as Chi-Chia Wang back in TAC 213, but I’ve looked it up, and it’s correct in this issue). No offense to anybody, but not exactly an all-star roster.

I may as well explain who the people on the cover are since they’ll play a role. “The Jury” are an extremely 90s team of goons who primarily harass Venom in his new capacity as an anti-hero in San Francisco (Why is San Francisco the only place California superheroes lived unless they were West Coast Avengers? Werewolf by Night, The Shroud, Daredevil, Venom, Iron Man… California is a really big state, guys), but they have also bothered Spider-Man. From their names to their designs to their tuff attitudes to being completely forgettable and generic, they really embody mid-90s superhero comics. Styx and Stone hail from late 80s Spider-Man comics, and are accordingly quirkier. Stone is a big mean tough guy with guns and stuff, but Styx is a skinny little guy dressed like a dracula who saps your life force with a touch. What a kooky pair!

As the issue opens, The Jury are fighting Venom on a bridge, but they’re not, really. Even though they bicker and boast constantly, it turns out to be a simulation, and the only real person there is their reserve member, failing because he isn’t cruel and murder-y enough for his boss, because 90s. Across the country, Styx & Stone are… I guess robbing the stock exchange? Like, they have big, cartoon bags of money, but… it’s the stock exchange? Spider-Man is trying to stop them.

That’s pretty funny. Both just as it is, and as a refutation of Spider-Man’s self-pitying whining over the last 5 months. Stone manages to shoot his buddy instead of Spider-Man.

I just wanted to get Spider-Man’s hilariously bad tuff guy dialogue in here. Andrew Wildman’s basic anatomy is stronger than the average person Marvel hired in during this period. You can reeeeeally tell a Stephen Baskerville inking job, huh? This looks so much like those issues of Web of Spider-Man we saw even though Wildman and Alex Saviuk are extremely different. All the stock dudes run up to thank Spider-Man, and mention a crime wave in DC messing up business. Spidey asks Mr. Stone if he knows anything about it, and attempts to intimidate him by… crushing a gold bar into powder? I am not an expert on the stock exchange, but I don’t feel like cash and gold are just lying around everywhere. Stone says a secret society contacted them to become their personal thieves recently, but they turned them down.

Attempts to seem tough on the previous pages aside, this sure doesn’t seem like the depressed man-child we’ve been reading about. We cut to DC, where a Professor Mikashi is disciplining a student named Jerry in his entomology class for not paying attention when he is visited by some men in black who say he needs to step up his progress or they’ll have to visit his daughter. Alright.

Aaaaalright. They sure are throwing characters at us quickly here. This is apparently the debut of “Sneak Thief,” perhaps the most poorly named thief in all of comics. She, this “Spoiler” (No relation to the DC character), and Professor Mikashi all only appear in this series, according to the internet. Sneak Thief. Sheesh. Check out my new character Fight Soldier. Anyway, that kid Jerry has snuck into Professor Mikashi’s office.

Good-bye, Jerry, we hardly knew ye. Now it’s 4:30am in New York, and Spider-Man is joking away as he stops 2 guys robbing a deli. Out of character for this period. Then a TV catches his attention (The news is on at 4:30 in the morning?).

Incorrect! As has suddenly become EXTREMELY RELEVANT, Peter’s college biology professor was Miles Warren. But thanks for playing, Mike Lackley, we have some lovely parting gifts for you! You’d think an editor would maybe catch things like this, but Danny Fingroth has already presided over two continuity disasters on this blog, so whatever, I guess. At any rate, Spider-Man maxes out his credit cards to buy a trip to DC (How many cards did one trip require…?) and now he’s at the university. He spies in Mikashi’s window and sees him looking really upset, but wonders if it’s because he’s guilty or being framed.

Spidey just webs her to the floor, game over. That’s pretty funny. But then the wall smashes open and the aforementioned Spoiler appears. I guess I had a preconceived notion of what this character would look like based on the appearance of “Sneak Thief” and on DC’s Spoiler, but… I was very wrong.

Duke from GI Joe has made some questionable choices since he left military service. Yet another generic jobber shows up on the very next page!

Man, where to start? If you didn’t read 90s comics, this is all you need to know. Crudely drawn, embarrassingly generic tough guys with silly names in way more splash pages than necessary. Everyone covered head to toe in belts, pouches, straps, and other accessories, none of which seem to serve any purpose. This single page is a crash course in comic books from 1992-1998 or so. Sadly. Warrant is actually not being introduced here, having appeared in Web of Spider-Man awhile back in all his goofy glory. This issue was apparently a page short, so the last page is just a pin-up by Wildman, which is amusing. The issues of this series, printed on cheaper paper stock and created by nobodies, cost 25 cents more than the regular Spider-books. What a cash grab! Come on back for more unabashed market exploitation next post.