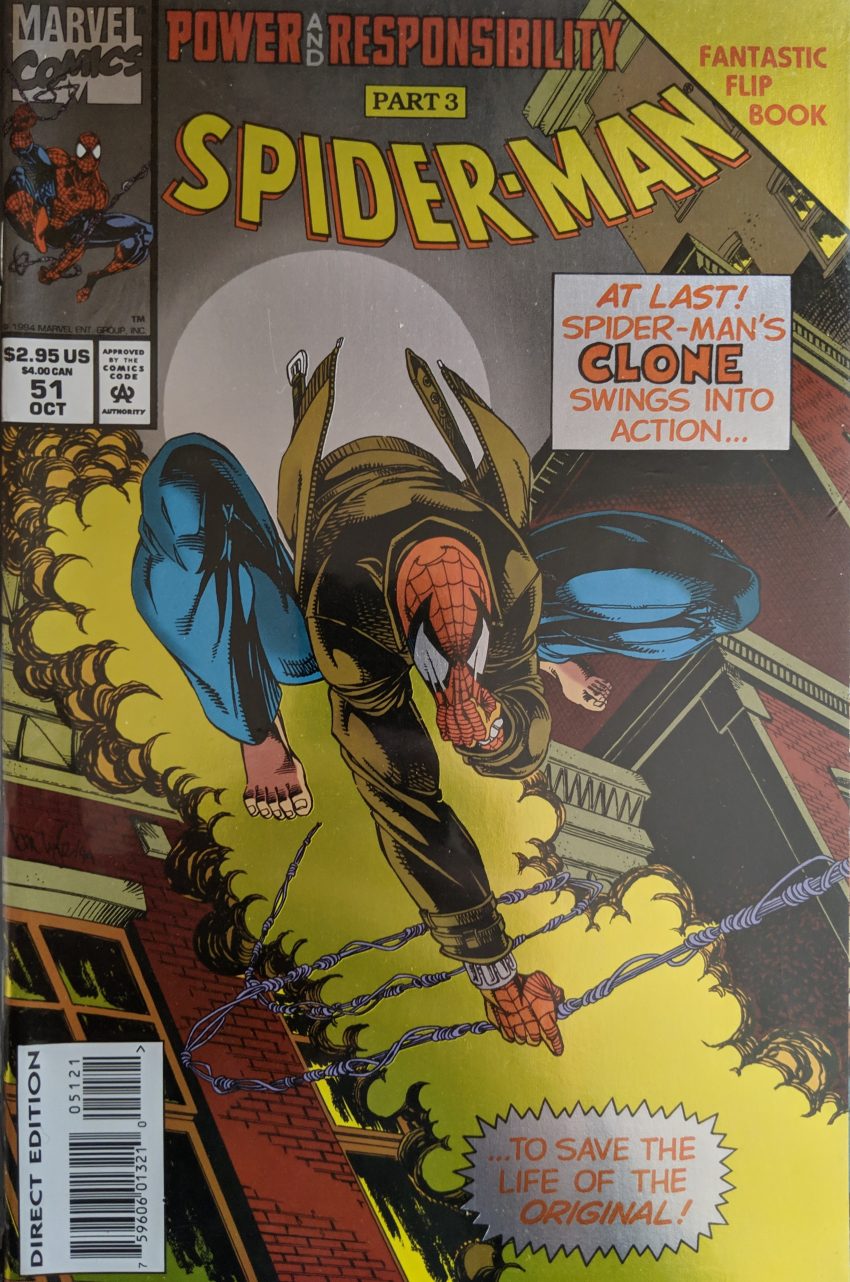 At last! He’s been an actual character in the book for 2 weeks, at last! He’s at the hospital still, and he recaps the crossover so far to the comatose Aunt May. What if she woke up remembering all this? That would be an interesting choice.

Weirdly sweet. The clone does present a sort of interesting idea, this guy trapped outside of his own life. They do a fake scare where Aunt May’s heart monitor indicates she died, but it’s just the machine came unplugged, all on the same page, so it has no tension. Then the clone swings through the night. Should he have webshooters? Seems like he shouldn’t. He does, though. Back at Ravencroft, Traveller orders that Boone & Tyler Perry’s Medea be sent to engage the clone when he arrives, as he continues to try to figure out what about this lame Spider-Man could be so interesting to the inmates of Ravencroft.

So very 90s. Inside, Spider-Man is hallucinating that he’s in a big web, being menaced by all his villains and his dead loved ones, to add insult to injury.

Outside, the clone slips past Boone & Medea almost undetected and gets into the institute. But soon they’re on him again. In his dream, Spider-Man begins to fight off the villains, saying the power & responsibility are his, but the clone hops in and says, “no, they’re ours.” In the real world, he thinks about bolting, but “with great power, there must come great responsibility” pops into his head, and he stays and fights.

And Spidey does, too, finally getting it together and breaking out of the restraints he was in. But Traveller once again picks him up by the face, saying their struggle can’t be solved with fists, so naturally, the clone kicks him.

Yeah, he called the clone Ben. More on that next time. In the back of the book, which looks like this:

We see the clone suiting up for his one and only battle with Spider-Man back in 1975.

Warren forces him through a crash course in Peter’s life, bullying him until he fights back and acts like Spider-Man. Then it’s revealed the whole thing has just been a visual representation of Warren implanting hypnotic suggestions in the clone’s head. Then he knocks him back out and, when he wakes up, he’s in the fight from the original story.

We’ll wrap this up next issue. It’s interesting to me that the books have dropped any pretense. They openly admit the clone will be sticking around, starring in 2 of the 4 monthlies starting next month, and this one even shows you his super suit. Kinda drains any urgency from this storyline.