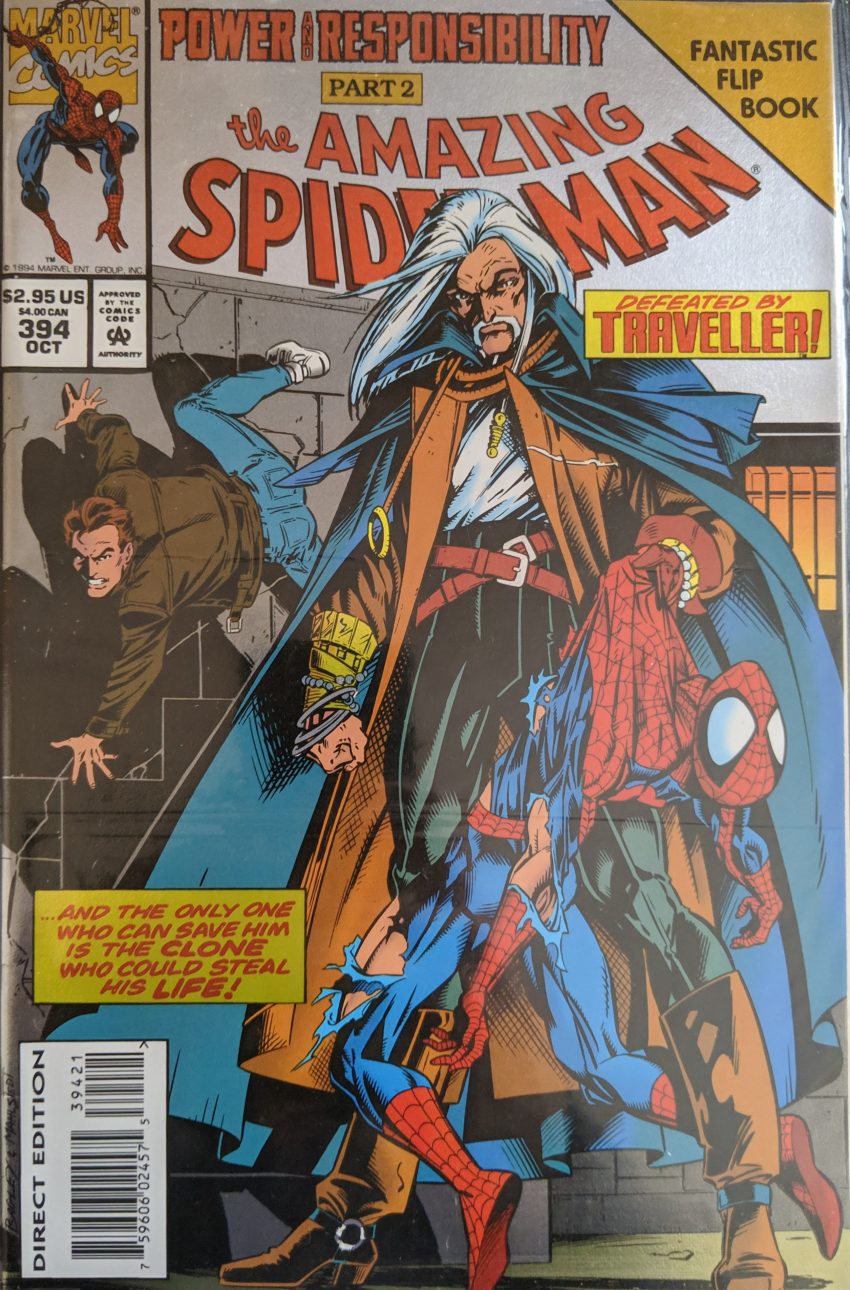 Steal his life, eh? Is that supposed to be the angle? Shouldn’t that have been even hinted at by now if you wanted us to think that?  Larry Mahlstedt inks this one and I think he’s on ASM for awhile. The clone stands on top of a building, looking out at the city that brings back a lot of memories… but not his memories.

Bummer, dude! Out at Ravencroft, the whole building is now encased in shimmering light, no one able to get in or out. Inside, Judas Traveller has Edward Wheilan by the throat, saying he has nothing to fear, which is a weird posture from which to say this. Edward, uh, spoilers, is Vermin, cured of his condition, working as Dr. Kafka’s assistant. Or was.

Vermin tries to attack Traveller, who tells him to fall down paralyzed, and he does. Mr. Nacht wants to study him, but Traveler says Edward Wheilan’s heart is pure, and he doesn’t deserve anymore heartache, so he has Chakra teleport him outside, and when he gets there, he’s a normal dude again. Like… what? Why did any of that happen? Just to show Traveller’s already comically vast-seeming powers? They’re really trying to put this guy over, and it is not working. Even as a kid, I was not impressed at all. None of this feels like a Spider-Man plot or Spider-Man villains. This is like some Dr. Strange stuff. But a Spidey comic it is, so we join our hero stalking the mostly empty halls of the institute. The narration tells us he’d rather be walking a gauntlet of his enemies in here than spend one more minute in the life of Peter Parker (Someone should tell Tom DeFalco & Todd DeZago that), while also talking about the “miracles of compassion” Dr. Kafka is achieving here, and how he doesn’t want anyone to endanger that. I think I’ve harped on this already, but that just doesn’t add up, man! He’s supposed to be this raging tuff guy now who hates his regular life, but he’s still helping people and using phrases like “the miracle of compassion?” You can’t be both! You can’t abandon your wife and dying mother figure AND worry about “the miracle of compassion.” This is such crap. First stop on the tour is Chameleon, who’s been driven extra-crazy by his encounter with Traveller and is currently shifting endlessly fro face to face to face. Every page in this sequence has Traveller’s eyes and some purple captions with general DeMatteis pseudo-literary pap in them.

Certain elements bemoan the amount of text on the pages of today’s comics, but look at this example from the era they grew up in. Sheesh. Spidey is scared after looking at Carnage and crawls up to hide in a corner. It’s described in much more self-absorbed language, but that’s what happens. Then we cut to MJ & her Aunt Anna.

Good for you, Anna. MJ says it seem to her the only family she’s ever had is standing in front of her, they hug, and she leave town, Anna crying as her plane leaves. Then we head to the hospital where May is, and see the clone has returned to her bedside. He thinks that he shouldn’t really care, that this isn’t his aunt…

At least A Peter is with her, if not THE Peter. He’s still in Ravencroft, running around being scared. He sees a guy with white skin in a black robe who may or may not be a hallucination (Sadly for us, he is not), starts freaking out and yelling at shadows, and then wanders into Traveller’s waiting hand.

Huh. There’s a twist coming in Spider-Man’s future that could be what Quack Sparrow is giggling at. I wonder if I ever picked up that as a youth. Spidey gets mad at the laughter and does a lot of punching and whatnot, yelling that he’s not an experiment, he’s a man, to which Traveller amends “an utterly broken man.”

There’s that white guy from earlier. This storyline continues to feel like a gross betrayal of the character of Spider-Man. It reads false. At any rate, Traveller says they’re not done yet, because he’s discovered there’s a 2nd Peter, and then, inevitably…

Why is Gwen’s hair white? The clone wanders New York freakin’ out until he’s found.

You know, I forgot most of this, and I hadn’t read the original Jackal story in full until 2018, so I didn’t have all the pieces as a kid, but clone Peter knowing who The Jackal is is impossible. There was no Jackal when the samples required to make him were taken. It strains your suspension of disbelief that the clone would have Peter’s memories in the first place, but now he’s got memories of things he couldn’t possibly know. Great writing. Anyway, they fight and then the clone’s about to kill The Jackal when his clone of Gwen Stacy shows up. They embrace, and that’s all part of the plan.

The Jackal picks up his imaginary friends and flies away, yadda yadda, look: The Jackal first appeared in comics only about 20 issues before the Spider-Clone did. Meaning this story has to take place some time in that 20-issue period. Meaning he grew these clones even faster than I assumed. So, so silly.