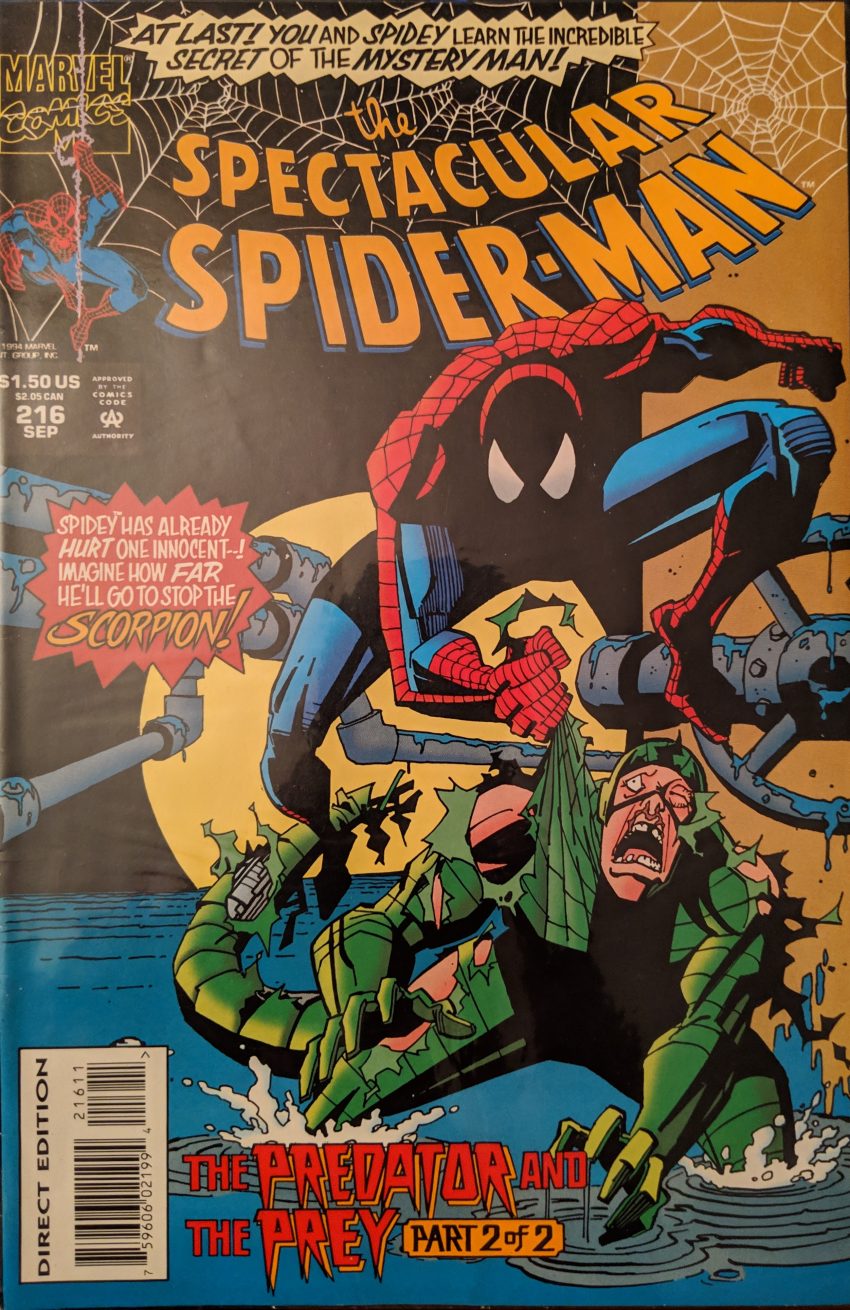 Still really unwilling to call that Cussler guy “an innocent.” Should he have gotten Spider-punched? No. Is he the villain of this story who got Spider-punched for attacking the hero with a wrench? Yes. Seems like a weird angle. Worse, it seems like Spider-Man being so unhinged that he hurts innocent people is supposed to be a selling point. But at least they’re gonna show you the mystery man. Only dragged this out for 3 months. Pretty conservative compared to some of their future choices. Todd DeZago scripts and Joe Andreani colors this one. This one’s nuts from page one:

Are you ready for an actual muck monster? Elsewhere in the sewer, Mac Gargan is enjoying Cussler’s cappuccino machine, thinking that guy really helped him realize there’s more to life than being The Scorpion. Up in the real world, JJJ is ecstatic about The Bugle’s front page being Spider-Man belting a famous rich guy.

Weird to see news of a character’s death before he’s introduced, but that’s this blog for ya. Nick Katzenberg was a sleazy reporter for The Daily Bugle who died of lung cancer. He was a despicable person and is not missed. Elsewhere, Spider-Man is swinging around, trying to find The Scorpion so he can prove he was working with Cussler and clear his name, sort of. But when did he figure that out? Last issue he thought Cussler was Scorpy’s captive. Ah, well.

The grim’n’gritty trend of the 90s is so great, guys. Really loving it. At the hospital, Cussler Jr. is telling his seemingly unconscious father how sad he is that he didn’t listen to him more, how he feels responsible for this, and how much he loves him. But Cussler is actually awake, and as his son leaves, he looks like he regrets some things, too. And that’s not the only family drama playing out in our cast right now…

How sweet. Complicated guy, that JJJ. Gloating about Spider-Man beating an old man TO THE FACE of that man’s son one minute, tender with his long-suffering wife the next.

Oh ho! Closing in on each other. Wearing almost the same coat, even. Upstairs in the hospital, Mac Gargan visits Cussler. He tells him he feels like he doesn’t even want to be The Scorpion anymore and owes it to him. Cussler tells him to keep the hideout, that he’ll keep funding it, and that if he changes his ways, there’s no limit to what he can achieve. What a nice old guy now that he’s had some sense knocked into him.  Elsewhere, our man has finally quit being a selfish baby and gone to see the person he loves most in the world.

Uh-oh. He runs into a still very somber JJJ in the hall, who tells him he’s realized how easily we take people for granted, and how admirable it is that he’s here for his Aunt. That he knows what’s important. Peter finally thinks he’s been acting stupid in all the preceding issues, and wants to get back to focusing on Aunt May & MJ. But first, he wants to go beat up The Scorpion. He follows him and watches him duck into the sewer, then gets in his Spidey gear, captions all talking about the rage building back up inside of him, just in case you were worried he might be getting back to normal. Gargan’s headed back to the hideout, feeling great about life, when The Enraged Spider-Man shows up. This next bit’s so ridiculous I’m going to put up 4 pages in a row…

What… I don’t… are you serious? If you’re expecting an explanation for the sewer slime monster that feeds on anger and helps people see the error of their ways, you ain’t getting one. This thing will never be seen or heard from again. Comics are WILD in this period, man. You can just print ANYTHING. No one cares! I did not remember this, either. What an insane plot device. The Slime Monster Of Love. Good grief. At The Bugle, Robbie shows JJJ today’s Daily Globe, wherein Cussler, Jr. tells the truth about his father’s criminal dealings under the headline “Spider-Man Vindicated.” Is he, though? He still punched the crap out of an old man. Then again, Cussler seemed to be doing prrrrretty well considering he got punched by a superhero, so we have to assume Spidey didn’t even hit him at full power. This whole thing was a storm in a teacup.  Anyway, Robbie assumes JJJ will be furious, but he’s not. He’s going to have dinner with Marla, and he seems calm. Robbie is stunned. Me, too! Good for you, JJJ. Now let’s turn our attention back to the hospital for the big reveal, shall we?

There it is. Did they tip it too much? Sal in particular made it really obvious the mystery man was Peter in his teases. Mackie bringing up the clone story from the 70s out of nowhere (twice!) was all-but daring the reader to call it. His love for May, his obvious superpowers… who else could it be? And that brings us to the big 4-part crossover we’ve been building to with every post in this era. I find myself weirdly excited about it.