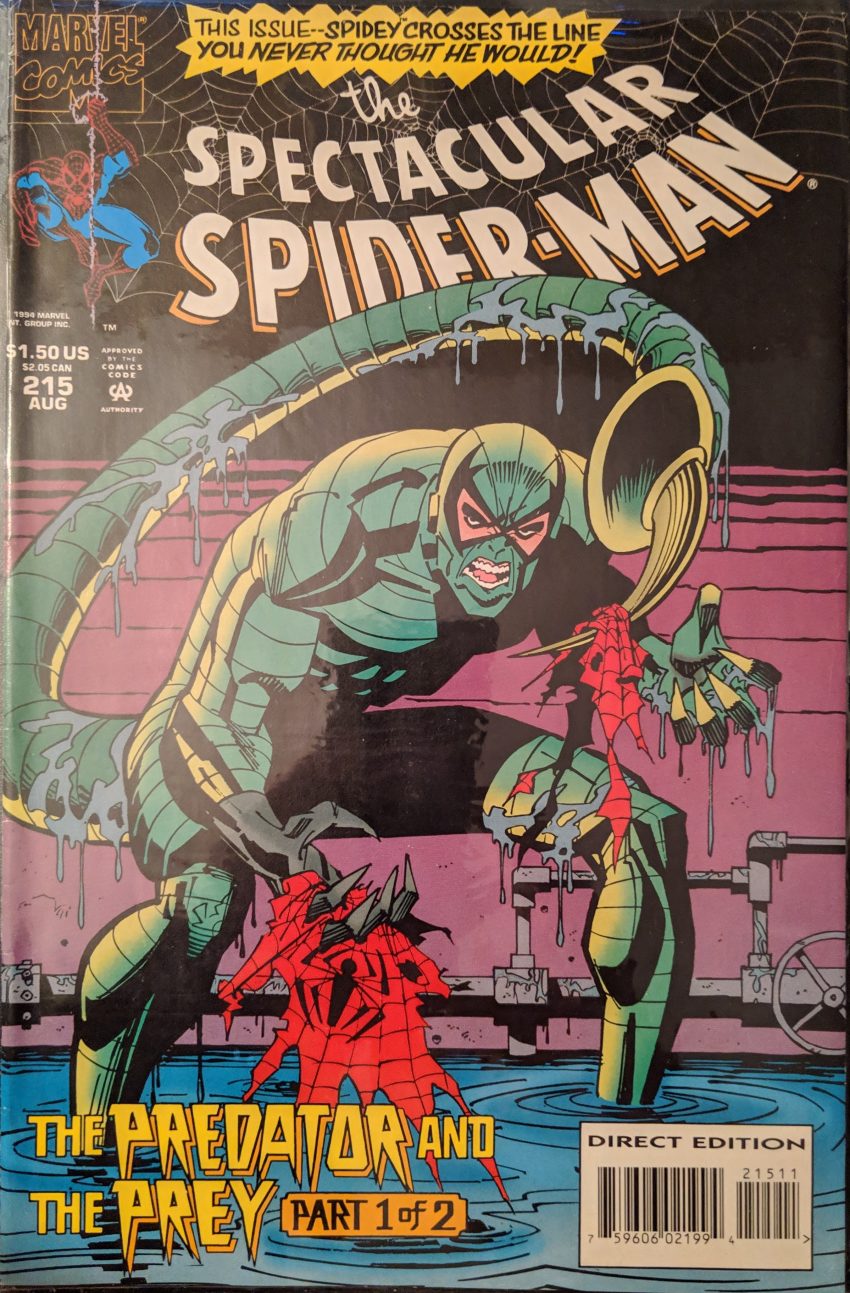 Our 3rd issue of TAC in this era is our first by its new regular-esque creative team. Sal Buscema is still doing all the line art, joined by colorist Glynis Oliver, previously credited on this blog as Glynis Wein, but, well, sometimes things don’t work out. And the plot is by none other than Tom DeFalco. He just can’t stay away. But he’s also Editor-in-Chief of Marvel Comics during their most insanely busy period in history, so he often just supplies plots, and the script is done by someone else. Usually Todd DeZago, but this issue, it’s Mike Lackey. Tom & Sal are here for a year or so. And, look, Spidey’s gonna cross a line. Aren’t you excited? As we get going, The Scorpion is in the sewer, and he’s mad about it.

Land sakes, the East Coast’s ultimate magnate in fine China! Who is this mischievous gnome? It’s hilarious how evil he looks. Does he hang out in sewers, too? He doesn’t look like it. He also doesn’t seem to have come here specifically looking for Scorpy. Speaking of whom, since we last saw him, Todd McFarlane added a big blade to his tail, but otherwise, pretty much the same thing. So, I guess he’s gonna pal around with the plate man. Next page, we learn plate man has had “a breakdown” and disappeared. His son has come to The Daily Bugle hoping they can help him find him. JJJ says he’s known the guy for a long time, and they’ll have The Bugle’s full support. Robbie asks Kate Cushing to put Peter Parker on it, but she hasn’t been able to get ahold of him in a week. Teed right up, we go see Peter, moping in his apartment alone. Kate tries him again. He actually answers! But he says he’s not interested.

Not sure why that caught his ear, but it’s nice that something did. Cussler and Scorpion have broken into one of his stores (I assume he as more than one. Right?). Scorpion lets us know he HATES computers as Cussler sits down to one. He says his son forced him out of the business, so now he’s destroying their financial records to get him in trouble with the IRS. Scorpy thinks this guy could help him get revenge on Spider-Man as they move on to cracking the safe.

Ladies & Gentlemen, it’s Angela Yin, the 2nd new photographer on The Bugle staff introduced in the last couple months. Unlike Cole Cooper, she’ll actually hang around for awhile. JJJ looks deranged at the bottom there. Meanwhile, Spider-Man is swinging around looking for Scorpion when he spies one of his informants. But also meanwhile, the mystery man is on the streets of New York, thinking May Parker needs him, that she’s the only person he’d risk coming back to New York for, when he sees a child running out in front of a speeding truck, and thinks he can’t let the kid be harmed.

You have to have this by now, right? I feel like Sal Buscema’s kind of giving the game away. Spidey’s informant didn’t get him anywhere, though, and he swings around for hours not knowing where Scorpion will strike next. Nowhere, as it turns out, he’s having a candlelit dinner with his new best friend… in the sewer still…

Alright. Cussler’s son, JJJ & Angela have used a computer at one of the stores to figure out which one they’ll hit next, and Spider-Man’s figured it out, too,  so everyone’s converging on one of the locations, including a bunch of good, old fashioned goons. Been awhile since we saw any goons. Spidey trounces them instantly. Inside, Cussler gives Scorpion some fighting advice, and then Scorpy lets Spider-Man see him climb down into the sewer.

That dialogue is… insane. That footnote is hilarious. Spidey sure doesn’t seem like The Spider in this book, but don’t let the end of SM 50 fool you. This issue was published the month before. It’s just wildly inconsistent writing from series to series. From here, it’s a straight brawl, the likes of which we’ve not really seen before.

It’s watching! What is it? Maybe we’ll find out. Up top, peering into a manhole, Cussler assumes Spider-Man’s beaten all the goons since it’s suddenly gotten quiet. Then his kid, JJJ and Angela spot him. He brandishes a wrench and tells them to stay back. In the sewer, Spidey is finally attacked by Scorpion.

Back where they came from, some of the goons are waking up, and they’re attacked by the thing in the sewer. Their screams distract Spider-Man, who nearly gets got as a result. Nearly. Instead, he puts a beating on Scorpion, who finally goes down. Spidey then goes to see what’s up with the goons. He finds a slime trail, like a giant slug had been through the tunnel, but otherwise, nothing. He hears the goons up ahead, running and screaming, but he can’t figure out why, and leaves.

The line has been crossed. Spidey punched an old guy. I mean… I dunno, right? An old guy attacking him? The villain of this story? Yeah, a real power mismatch, but it’s not like he kicked a baby or something. But since everyone, including Spider-Man, thinks Cussler was kidnapped by Scorpion… rough times. I’ve had this issue since it came out, but I don’t remember it. I remember the big Line Crossing, but I didn’t even remember who Spidey hit. It’s funny, I could see that panel in my mind, but I woulda told you he hit someone else, in particular. But I’m not going to say who. I was conflating it with something that comes later.