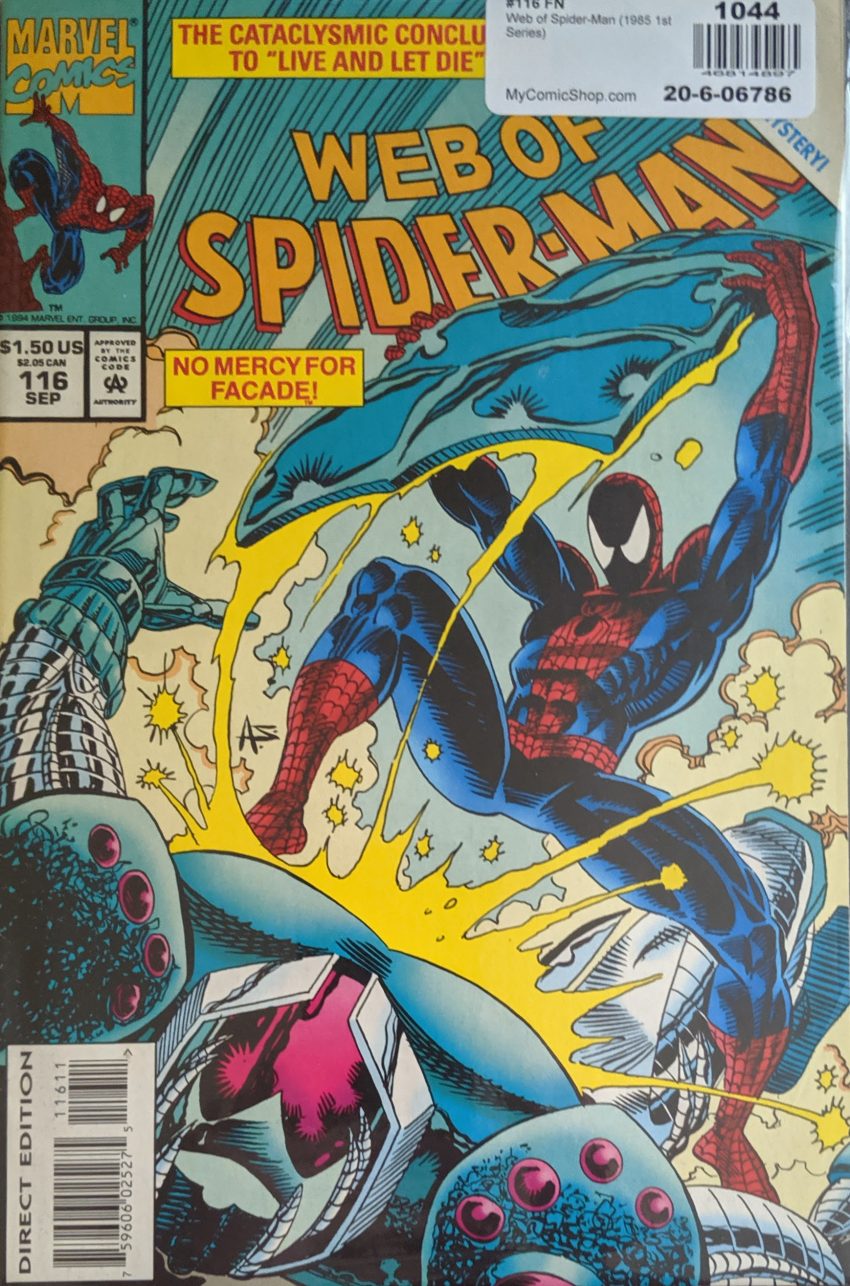 And we’re back. I love a good bash & trash issue, don’t you? As you may recall, we left off on page 6 of this issue in the end of the 115 post. After Spidey tagged FACADE with a tracer, the next page is this:

He’s “The Spider” now, you see. And, in truth, he was “The Spider” last issue, too, I just didn’t mention it. Somehow, all these stories are happening at once. It’s so dumb. Robbie suggests Amy say something, but she’s just not able, so this dingus Cole Cooper starts talking. Archer Bryce shows up and has a very rude chat with Betty during the funeral.

This is some funeral! Lance Bannon was in these comics for 15 years, he deserves better. The whole day passes (My god, the timeline), and we catch up with Chase, Betty, and JJJ in the latter’s office. Betty shares a list of her suspects (What have they been doing all day?) without actually naming any, people who could gain financially from stealing the armor, and almost implies she thinks it’s Bryce when JJJ says he has a confession to make.

I  mean, no one REALLY thought it was JJJ, right? If he’d stolen the suit to fight Spider-Man, 100%, 300%, even, but not to kill Lance. FACADE is stopped just short of smashing through the window by Spider-Man. Or, I guess by “THE SPIDER.” As he engages, Spidey thinks that he followed Betty here from the grave and waited (WHAT was anyone DOING all day!?) as their battle turns into a chase.

Spidey webs FACADE’s hand and foot with his suddenly conducive webbing, completing a circuit so FACADE zaps himself. I did terrible in science classes, but… that doesn’t seem real. While FACADE is paralyzed by his own zap, Spider-Man rips his chest plate open, but in the process, he gets hit by some of the zap, too, and passes out. When he wakes up, whoever was inside is gone, and Betty, JJJ and Chase have found him. He swings away, Betty thinks she’s going to finish investigating Bryce, JJJ uncharacteristically says nothing at all, and Chase says he’s going to investigate everyone at the funeral, since they all knew where to find the 3 of them. The still-secret guy who wore the armor visits Lance’s grave, thinking that when he killed him, he also “buried the man inside,” and now that he’s tasted power and doesn’t have it anymore, he’s nothing but a hollow shell. Aw, poor murderer is sad now. Meanwhile, at the hospital…

Wait, we’re not gonna find out who FACADE is? And the next issue of WEB begins the crossover revealing the mystery man??? WHAT???

I just looked it up. FACADE’s pilot was NEVER REVEALED. Kavanagh hoped to make the mystery a long-running subplot. To pull a Hobgoblin, basically. But no one cared, so it never came back! ARE YOU KIDDING ME? Holy crap. Someone interview that man and find out who FACADE was, this is absurd. SHEESH.

My God, Magnum. Uh, anyway, we gotta settle up with the other titles, and then our next issue of WEB reveals the other mystery man. Well, actually, we’ll see him slightly before that, but you know.

This is Alex Saviuk’s last issue. Seven years on Web, and a few issues of ASM before that, and the Parallel Lives graphic novel and several promotional comics, is a serious legacy on the character. And he’s not done! He leaves to illustrate a comic adapting the then-new Spider-Man Saturday morning cartoon for 3 years. From there, he’ll go to work on the Spider-Man newspaper strip, bringing his more Romita-inspired style back. He’s still doing that as I type this! He’s a Spidey lifer. Big ups to you, Alex, wherever you are.