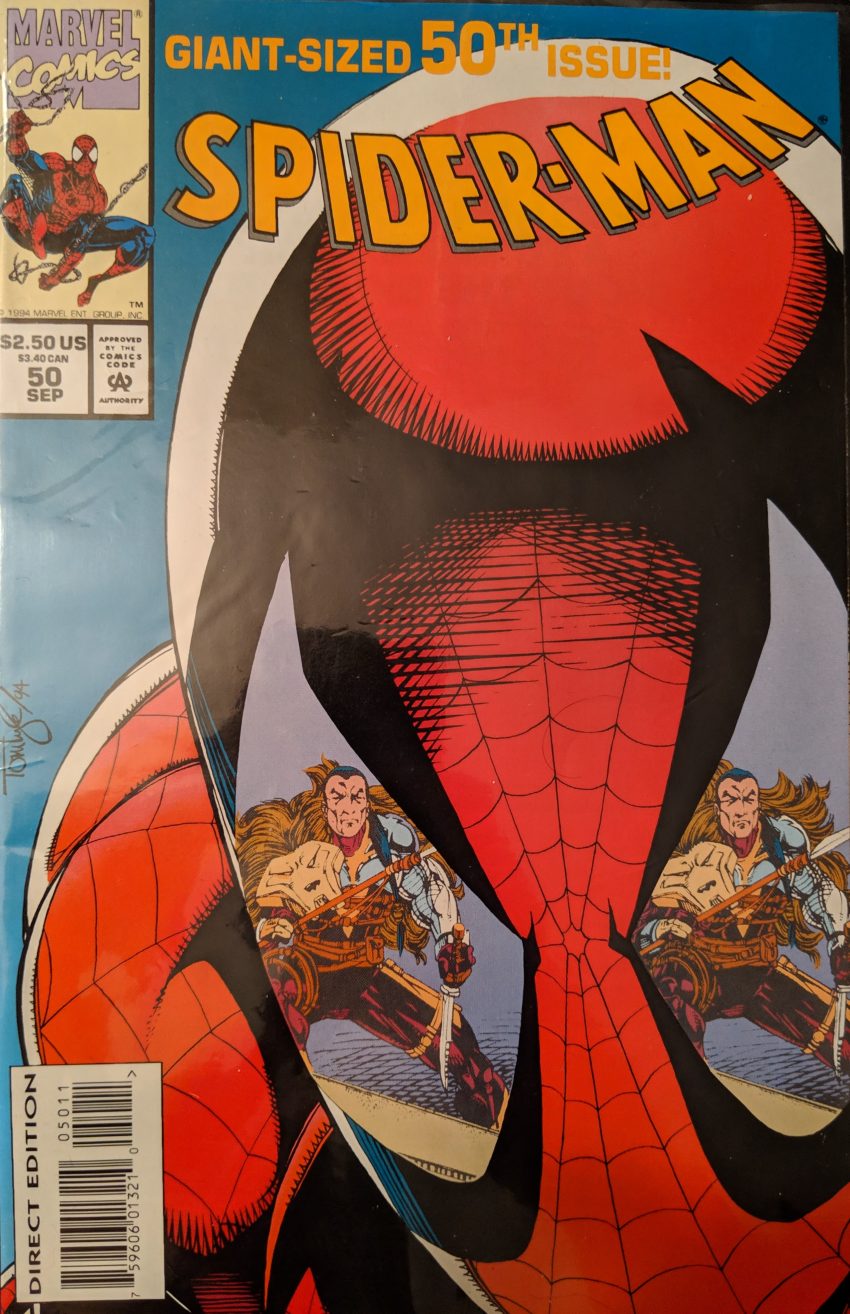 Anniversaries should be something to celebrate. How do you celebrate when your job is to make Spider-Man comics sad? Let’s see. Vladimir Kravinov has come to the US, and is trying to follow in his father’s footsteps. He’s in the brownstone where Kraven died, running around nude like Kraven did, holding a knife and the journal he got from Hobgoblin. He fights and kills 3 ninja-ish guys as part of his “test.”

Even got the orange narration boxes like his dad. Then he yells at his dad that The Spider dies tonight and smashes through a window, still nude, as his main man Gregor worries that this will all end in tragedy. So, if you’re Howard Mackie & Tom Lyle, really, really, really riding the coattails of the famous Kraven’s Last Hunt while working side-by-side with its writer every month… does this feel weird? Awkward? Exciting? I just wonder. Anyway, how’s our guy?

Still being stupid? Just making sure. It’s MJ on the phone, begging him to come to the hospital. This is the week after ASM 393 came out, so MJ has already left town. Unlike all the stuff I’ve been wrestling with trying to read these in some kind of order, there’s no explanation for that particular continuity issue. It doesn’t matter, he just leaves without answering. He’s decided tonight he’s taking out a mass murderer called “The Pale Rider,” a real 90s stereotype who’s just randomly killing people in the street with no known motive. Spider-Man thinks the cops haven’t been able to track him down as he finds the guy real easily, standing in the middle of the street, and drops on top of him. Seemed pretty easy to me.

“The Spider” has apparently decided he’s just gonna hop around fighting people for the rest of his life. The fact that he’s decided to selfishly abandon his family in time of great need to help people is… hard to parse. This “I am The Spider” crap would play better if he stopped superheroing, too, but then, what would the books be about? It’s almost like this was a bad idea.

There he is, all geared up. Especially for a 90s costume, it’s not bad. Got the lion motif like dad, but not openly copying his dad (And since Kraven is one of the silliest looking villains of all time, good choice, kid). Tougher looking, more dangerous looking. It’s the 90s, so he’s inexplicably got 14 belts on, plus 5 straps around his ankles, but that’s just a sign o’ the times. You could do worse, especially in 1994.

He’s really lost it. Also: Ring guy broke into Aunt May’s? Who is this guy? The reveal is comin’ up shortly. Why is Spider-Man there, though? What business does “The Spider” have this far out of town? Back in the city, Vlad & Gregor are flying around in a helicopter, looking for Spider-Man. Vlad’s ready to do his thing. Gregor says he’ll be in sight at all times if anything goes wrong, but Vlad’s not hearing that. He finds a shred of Spider-Man’s costume on a roof (How lucky!), and now he’s got Spidey’s scent, he’s off to avenge his dad. Gregor wonders “What have we done?” for the 2nd time this issue. Back at the house…

If there was a comic where Peter got that journal, I haven’t seen it. I find it really unlikely that he has it. It makes him think about the time he had to fight a clone of himself, and then think about Kraven’s Last Hunt, saying they all tried to destroy him, to be him, but they failed. I suppose that’s a fair comparison. Then he smashes through the attic window of his beloved Aunt’s house while no one’s around to take care of it and leaves. He goes to the cemetery where Uncle Ben is buried, where he finds an old man being mugged. His two assailants run, but then bolos fly out of the night and snap their necks. Guess who?

Baby Kravey zaps him with his electrified glove, then darts him in the neck. It’s the same drug from Kraven’s Last Hunt, of course. He says this puts them on even ground (Does it, tho?). He tells Spidey he is Vladimir, son of Sergei Kravinoff. Hm. They’ve been spelling it “Kravinov.” I was pretty sure it was “Kravinoff,” but the new spelling seemed more Russian, so I doubted myself. Pick one! Anyway, he informs Spider-Man he is now to be called The Grim Hunter. Eh. Had to be called something, I guess. The 90s.

Spidey bats the knife out of Grim’s hand, then runs away. He tries to swing up on top of a nearby bridge, but Grim is now shooting lasers from his spear. This guy’s gear is pretty far removed from his dad’s. As Spidey plunges into the water, something happens:

Having suddenly reclaimed his humanity, Spidey whups the crap out of Grim Hunter in a single page. But then Gregor shows up in the helicopter. He tells Spidey to back away or be fired on, but Spider-Man just leaps up on to the helicopter, drags Gregor out and lets it crash below them.

Greg’s no more into this than Spidey is. Spidey webs them up to drag them off to the cops for killing those guys at the cemetery. He says he’s got his own legacy to live up to, and he’s doing what he vowed long ago to do, as Spider-Man. Is this the end of the darkness? Nope! There follows a brief backup story that shows Kraven “Most Dangerous Gaming” Vladimir as a child to help teach him to be tough, and then we’re out.