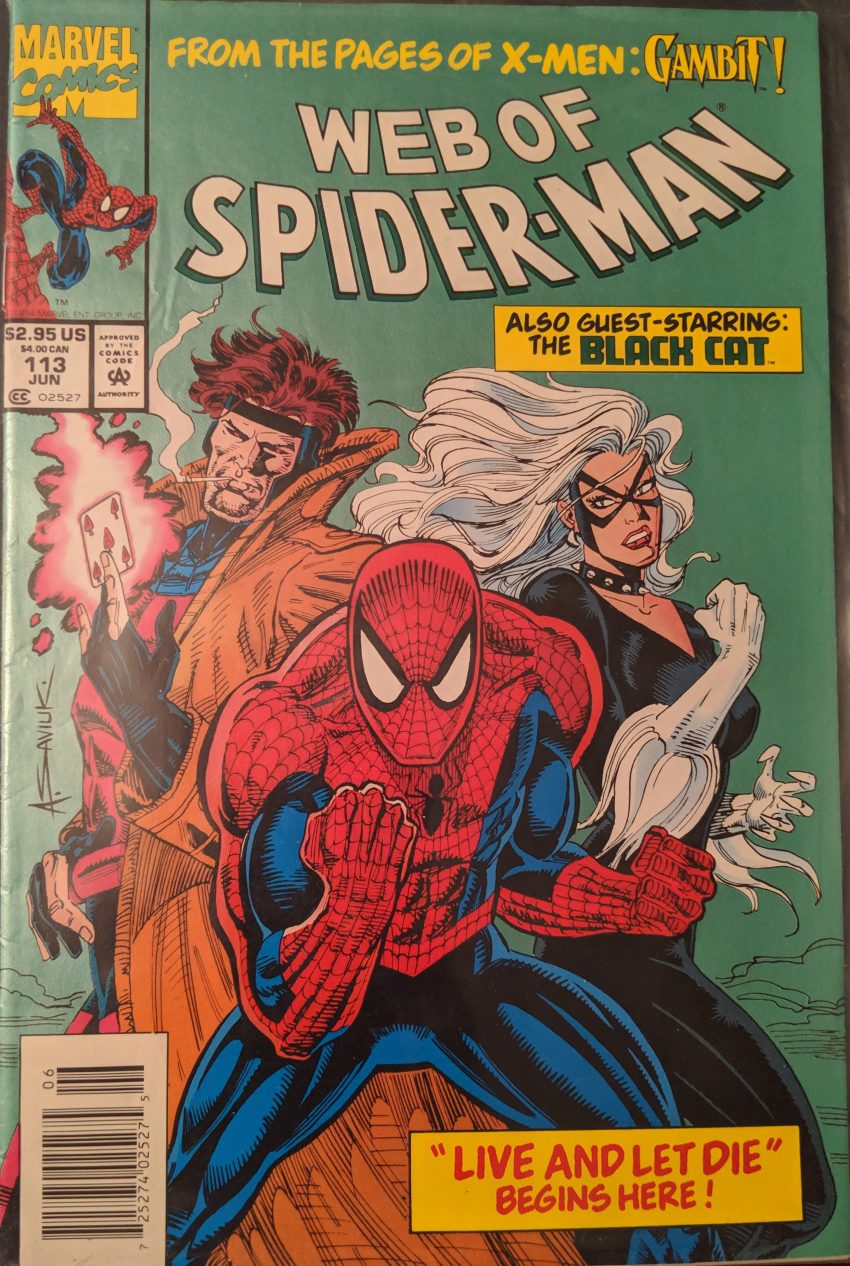 I have yet to mention that Danny Fingroth is back as Spider-Man group editor, and he’s brought yet another continuity nightmare with him. We’re getting into an awkward spot here, where all the Spidey titles are pushing toward a crossover, but not coordinating well at all. Something happens in ASM 391 that is referenced in all the other titles. The idea that Spider-Man has been running nonstop helps, playing into the idea that he really could be falling into all these adventures in the span of a day or three. Buuuuut SM is the only one that really leaves many gaps for the other titles to, you know, happen at the same time. ASM 390-393 are a continuous story with cliffhangers. WEB 113-116 aren’t as airtight, but then a moment in 115 blows it all up. Ugh. I’ve arranged it in the most reasonable order I can. We’ll see people reacting to ASM 391 before we see it, though. I just can’t square it all up.

Anyway, welcome to Web of Spider-Man, 1994. Alex Saviuk is still here, but it’s… not so great. He’s trying really hard to fit into the post-Image “rough, millions of lines everywhere” style, and it doesn’t suit him. He’s got a classic style more at home in the era where he got started. But he’s trying. You gotta give him that. And he’s not going to lose his mind over the change in fashion like John Byrne did, so you gotta give him that, too. This month, he’s doing breakdowns for Stephen Baskerville, who is applying a whole lot of 1990s mess to the work, and Al Milgrom, who is not, to finish. This one’s written by Terry Kavanagh, who’s been writing the book since 97 (Previous writer? Uh, Howard Mackie. Just shuffling these guys around) and colored by Bob Sharen. Some familiar names from a previous era there.

We get started at what we’re told is the grand opening of the new Macro Science Museum, and event Peter Parker would love to attend, but Peter Parker isn’t in right now, and Spider-Man has heard something nefarious is going to happen here, so he’s on the case. And he’s not alone.

Busy evening! Felicia’s story has taken some odd turns since last we saw her. This Cole Cooper kid is a short-lived Jimmy Olsen knockoff who more or less only appears in this story. Lots of long time Spidey folks here, though. And as this Mike Wilson is scared off of Betty by the European industrialist Archer Bryce (Some name!), who says he knew Ned Leeds when he was in Europe, we see JJJ & Marla are here, too. And soon, they run into even more family:

John & Dr. Kafka work at Ravencroft, the aforementioned Arkham Asylum knockoff. Look at him! Last time we saw him? Locked in a mental hospital. Time before that? Werewolf. Now he’s got a good job (And that’s not even mentioning his time working for The Avengers as Captain America’s personal pilot in the 80s). Doing it up. I like this party scene because it’s full of familiar faces, and also because it’s not endlessly depressing like the rest of the comics this time period. We see Felicia trying to use her feminine wiles on that Wilson guy, but he says his wife is on her way back from the bathroom, so he can’t show her the “Working display micro-fusion generator” on the 2nd floor that powers the whole building. Now THAT sounds like it’ll come back later! That Archer guy is up there with Betty when he gets called away to the night’s demonstration.  She’s graduated from secretary to reporter since last we saw her, and thinks he’s not gonna like what she writes about him. We get quick looks at how JJJ is taking out his anger at John on Lance, and how John’s night has been ruined by JJJ, and then it’s time for the demonstration.

I have many questions. Why is a pharmaceutical company making battle armor? What in the world does “explo-skeleton” mean? Why is JJJ so taken with it? Explo-skeleton? Does it make your skeleton explode? That sounds bad. Homeboy up there keeps talking about all its incredible attributes as we take special care to see Cole Cooper, John Jameson, and Archer Bryce’s reactions. And then, on page 14, Spider-Man appears in his own comic, and not alone, either.

Now dat’s a spicy crawdad, I gar-on-tee, haw haw haw! Gambit say he not here as de X-Man, but as de “blood-member” o’ de Thieves Guild ok, I’ll stop. While this is certain to be Ye Olde Two Superheroes Fight Over A Misunderstanding, leading with the phrase “Thieves Guild” was a prrrretty dumb thing to do, Gumbo. Y’all know Gambit, I assume. Charges objects with kinetic energy, wears a trenchcoat all the time even though he’s from a place where it’s always really hot with 100% humidity, possessed of one of Chris Claremont’s most absurd accents. I grew up on the Gulf Coast, I spent a lot of time in New Orleans, I’ve had friends with Cajun relatives, and I have never met anyone who talks even remotely like Gambit, chere. Anyway, it’s fightin’ time. Gambit’s explosions catch the enhanced ear of Felicia Hardy, who slips away from the demonstration as dude is talking about how the FACADE “still requires human interaction” (He JUST said it works off a person’s biology, what else would it do?) and no one should be in it for long, which feels like more info that’ll be relevant later. Betty Brant leaves to find out where Bryce went, and Lance & Amy slip away, too…

Aw, look at that. We saw Amy’s first appearance during the Stern years as she was having a fight with Lance, and look at them now. Felicia keeps tracking the noise of the fight, getting a weird feeling about a certain room in the building but with no time to investigate, as Spidey & Gambit’s fight has taken them into a room marked “Lunar Display,” so it looks like they’re fighting on the moon. Gambit says he’s here to make sure no one from the Thieves Guild is behind a rash of robberies he’s tracked all the way from New Orleans…

You take that coat off and Gambit’s outfit goes from funny looking to completely ridiculous real quick. They keep on fighting until Black Cat literally jumps between them.

2019 issues of ASM have revealed Felicia and her dad to have been members of the NY branch of Gambit’s Thieves Guild, you’d think they’d mention that. But Kavanagh couldn’t have known what someone else would do 25 years later. They all wind up back in the room with the generator. Downstairs, the demonstration hall is evacuated due to the fight, with Wilson running out to check on the generator while Haney stays with his FACADE suit. All the lights are out, and they note the guards present earlier are missing and find them tied up in a closet just as 3 almost invisible dudes attack.

Spidey has some oddly specific informants lately. Black Cat says she’s faced “The Silencers” before, so she can offer up some exposition about how their suits refract light and sound and they do top dollar assassinations (and a caption indicates that story has never been told). Cat’s been buffed considerably since her last appearance on this blog, with further enhanced senses and a suit full of gadgets, so she’s no easy mark for them. As our heroes get the better of their invisible foes, the last one threatens to blow the generator if they don’t let The Silencers escape.

Spidey essentially sends out a small EMP knocking out The Silencers’ gear, and that wilson guy elbows his attacker unconscious. Soon, all The Silencers are dangling from a web outside the museum for Betty to notice.

…from the real problems in his life, he thinks. Meanwhile, back in the presentation hall, Al Milgrom takes over on finishes, as Lance & Amy are emerging from their closet, where they find everyone’s left and the lights are off. But then Lance trips over Haney’s dead body. He shoves Amy back in the closet, and then uses an infrared attachment on his camera to see a mystery man climbing into the FACADE armor in the dark. Unfortunately, he’s spotted doing so.

Well, that seems bad. That tidbit about it not being safe for anyone to be in the suit too long is surely going to play a role later. Who stole it? Who knows? I bet we find out next issue. This is another one I surely bought just for the included promotional items. I have recently acquired the rest of the story, but never read it before. It’s all gonna be news to me.

Unusual to see Gambit here. X-Men rarely appear outside of their own books. I mean, other than Wolverine, but in this era, Wolverine was a guaranteed sales boost, being perhaps Marvel’s 2nd biggest character behind our man. Some people might quibble with that ranking, but Spider-Man… just Spider-Man… starred in 61 comic books in 1994. 4 monthlies, a quarterly, 3 annuals and 4 miniseries. Plus there were 12 issues of Spider-Man 2099, and probably guest appearances in other peoples’ books. I would say The X-Men were bigger than Spider-Man, but Spider-Man was bigger than any single X-Man. But, regardless, while it wasn’t uncommon to see Wolverine pop up outside the X-books, anyone else is a surprise.