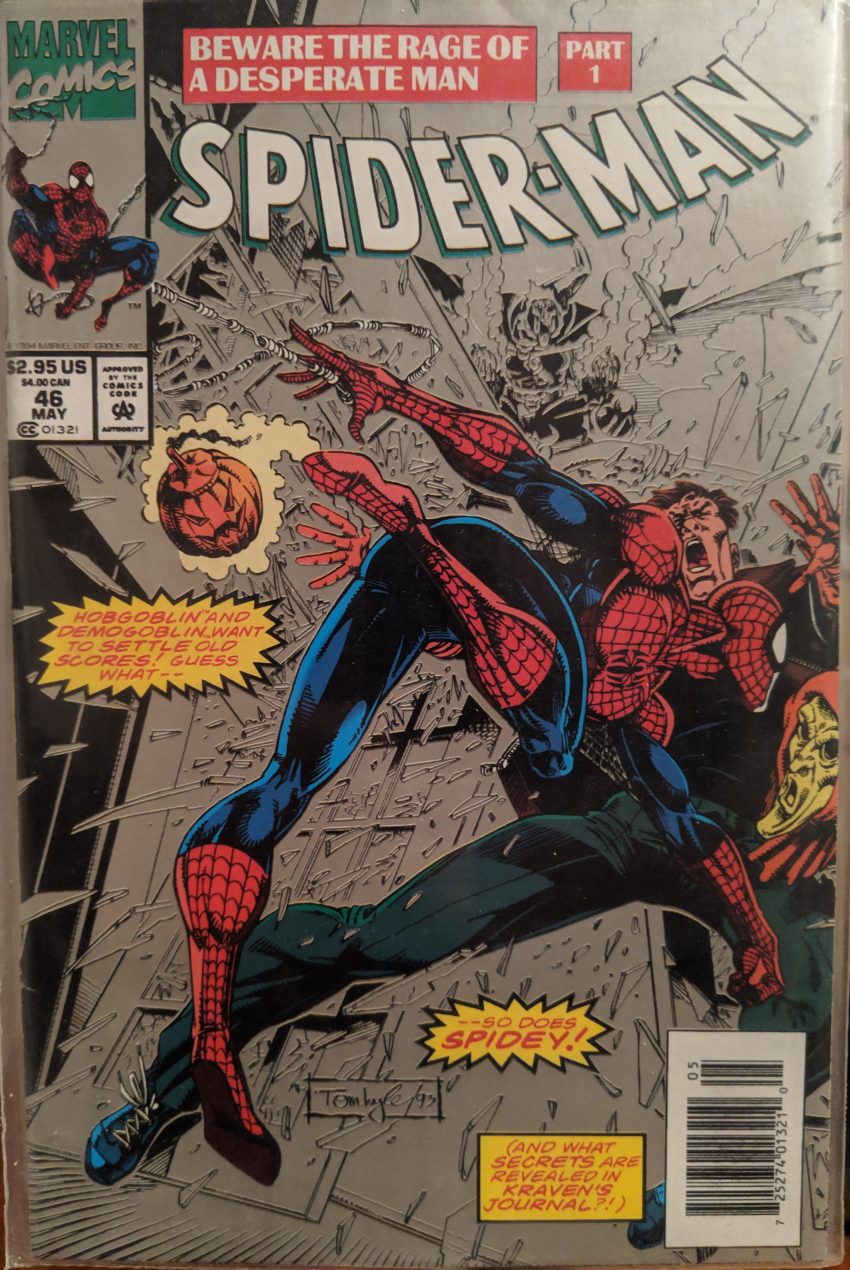 This cover was clearly not intended to be part of this shiny gimmick initiative, what with the actually important stuff rendered all-but invisible by it. “Beware The Rage Of A Desperate Man.” Just in case you were worried this story might be fun, worry no longer. But will it be good? This one’s brought to you by this title’s regular team in this era: Writer Howard Mackie, penciler Tom Lyle, inker Scott Hanna and colorist Kevin Tinsley. This may be a controversial statement to the initiated, but my choice for the best Spider-Writer in this time period is Mackie. Many years from now, he will be near-universally despised for ruining Spider-Man, an accusation that simply cannot be true. I mean, he will write some terrible, terrible Spider-Man comics in the future, but not in a vacuum. Editorial sets the tone, ultimately. Anyway, this ain’t that, and I recall being a fan. Maybe I’ll change my mind, who knows? Tom Lyle is a pretty solid penciler for this period. Certainly has his own look, whatever else you may think of him. And Scott Hanna is a true master of the form. He’s one of the unsung heroes of Marvel comics in the 90s and 2000s. He’ll do a lot of work on this blog, and no matter who’s drawing, they tend to look their best when he’s inking.

This story is going to make it impossible to hide anymore, so I’m just gonna get it out of the way: The Hobgoblin is currently Jason Philip Macendale, the mercenary who used to be Jack O’Lantern. Not the first to wear the suit, and not the last, but he’s the guy right now. And he was the guy when The Hobgoblin literally made a deal with a devil to get more power, becoming a demonic version of himself that no longer needed to wear a mask to look creepy. And then Todd McFarlane made that version a religious fanatic rebelling against his true nature, for some dumb reason. And then his demonic self got split from his regular self into a separate being called “Demogoblin,” who is still a religious fanatic. The 90s, y’all! We’ll see all those bizarre events eventually, but that’s where we stand going into this one, which obviously features both of them, as mentioned on the cover.

The issue opens with Spider-Man swinging around, recapping his recent life, hoping if he swings around enough, he’ll stop feeling like his life is out of control. Meanwhile, he’s our first look at this doofus:

Spider-Man sees him zooming by and gets upset about how no matter what he does, these guys always come back, and starts chasing him. Meanwhile, Jason Macendale is being led into a fancy apartment by some two-bit thief he met in a bar. The guy tells him he broke into this place awhile back and found no one had been living here and moved in himself, even convincing the doorman he’s a relative of the owner. And he’s brought Macendale here because the owner is someone “in his league.”

A son, you say? Seems unlikely! But I’ve talked about that before. Yeah, this lil dude had been living rent free in the building where Kraven shot himself. He wants to use Macendale’s contacts in the underworld to sell the journal. Macendale, of course, just kills him and takes it. And then Demogoblin smashes through the window, babbling about their shared bond that can only be broken by death.

Spider-Man’s not in the mood for any guff, but as soon as he realizes where he is, he starts freaking out. His mental state was already precarious enough without being reminded of the time he was buried alive. But then Demogoblin starts talking about his righteous mission again, and Spider-Man’s anger gets the better of his fear.

That’s pretty funny. He catches Macendale trying to flee, having noted the corpse in the other room, wondering aloud why he didn’t just let Demogoblin kill him. Speaking of whom, ol’ toothy burns his way out of the web cocoon he’s in and is coming for Macendale again. Spidey thinks again that he should just let it happen, but he’s not that far gone yet, and gets between them.

Demogoblin finally down for the count, Spidey turns his attention to Macendale, who unloads a bunch of pumpkin bombs from his bag and escapes while Spidey’s pulling Demogoblin out of harm’s way. Spider-Man wonders why he keeps doing this.

In an epilogue, we see Macendale arrive in Russia, now on a mission to go find Kraven’s kid. More on that next issue.