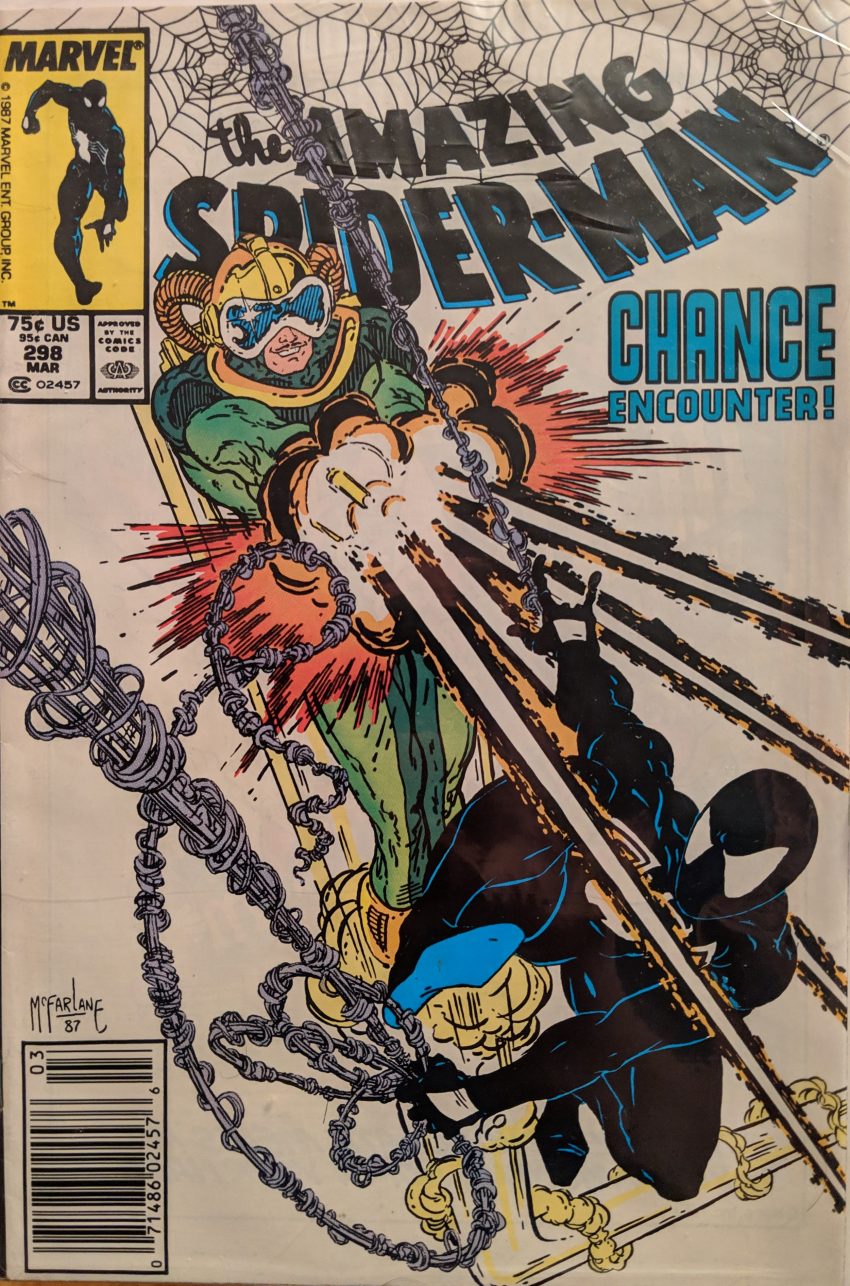 Here he is. Todd McFarlane. The man who changed Spider-Man and then mainstream comics forever. His unmistakable art style would propel Spider-Man to truly incredible new sales heights, and then he would go on to co-found Image Comics, establishing a new option for creators who wanted ownership of their work that is still flourishing today. And he would have a pretty massive impact on me, too, which I guess I’ll talk about here and there over the course of his run on the character. Suffice it to say that, as a youngster who loved to draw, when I saw his totally unusual work, he became my idol for many years. Would I be a huge Spider-Man fan if not for him? Would I have amassed an embarrassingly huge comic collection if not for him? Would I have gotten my art degree if not for him? Would I be making my own comics if not for him? I really don’t know. It’s actually possible that he changed the course of my entire life. That’s a strange thing to think about.

But! All that’s in the future. Right now, he’s just a guy. A guy coming off a run on The Hulk, and a guy whose unique approach has warranted he be put on a more high profile book, but not yet one of the very few people who can say they became a millionaire in this business. In fact, to start, he’s not even getting to ink his own work, and before he really broke, other people didn’t know what to do with his liquid-y, cartoony line. Other inkers would try to restrain him or bring his stuff more in line with the norm. So this issue, inked by Bob McLeod and colored by Janet Jackson (You know), won’t be quite as radical as what follows. But, just from this cover, for better or worse, it’s pretty obvious no one else is drawing like he does at this time.

Things are crazy for me off the rip, because I got a new copy of this one during The Great Ebay Hysteria of 2018. Many of my issues from this era are pretty ragged, and when I saw more pristine copies for shockingly low prices, I replaced them. And my original copy of 298… Who knows where it came from, I woulda gotten it as a teen, but it was MISSING the first and last pages! I picked up on this as a youth because the comic opened in mid-sentence and had no credits, but whatever, this is me seeing a whole copy for the first time, like 25 years+ later. This issue opens with Chance, a mercenary for hire Michelinie introduced in WEB, on a mission to stop a mobster from turning state’s evidence, which he eventually accomplishes by blowing up the car he was being moved in, and that’s where I originally came in, mid-sentence:

If you know Todd McFarlane’s work, you could pretty easily identify the first 3 panels as him, but the rest of the page? Not so much. This is the kind of situation he often found himself in when he didn’t ink his own work. Also: What on Earth are MJ’s limbs doing down there? Is she ok? Did she get hit by a bus? Sheesh. As I said, I worshipped at this guy’s feet, and this kind of poorly considered posing was not a positive influence. Anyway, MJ wraps up her shoot for the day and tries call Peter.

Yeah, right out of the gate, McFarlane has permed MJ’s hair. It’s the 80s, after all. Aside from that awful mullet Ron Frenz gave her, no one’s ever had the guts to change MJ’s hair before. Speaking of mullets, as we jump ahead several hours to Peter checking his messages at The Bugle and hearing MJ’s, we see Peter has cut the one John Romita, Jr. gave him back in 290, which Alex Saviuk faithfully maintained, but Mike Zeck and Cynthia Martin completely ignored. But McFarlane will bring the mullet back himself soon, so I wonder if McLeod is responsible for the more traditional haircut. Peter feels weird about possibly moving to a very fancy new address, because MJ can afford it, but he never could. He asks Robbie if there’s any assignments up for grabs, but he’s got nothing.

Is taking the bus really cheaper than making web fluid? There’s that crazy webbing. McFarlane wasn’t the first to add swirly details, but he is the first to have Spidey waste so much of it, often surrounding himself in a cloud of web. He heads back to the Chelsea street apartment he’s had since the 130s, which he’ll soon be moving out of, and thinks about how Mary Jane has uprooted her whole life for him, and he should do something crazy for her. Seeing a People magazine with a cover story about The Chippendales male strippers, he has an idea.

It really is crazy the degree to which McLeod is “fixing” McFarlane’s art. There’s very little of him on this page, and that figure of Peter is the most anatomically correct human body that will ever be seen in a comic with McFarlane’s name on it. As Peter puts some pants on, we take a look at the far fancier evening Chance is having. He’s out at a posh restaurant with the wife of a rich guy when he gets paged for a job. He puts the lady in a limo and hails a cab, betting the cabby he can’t get to their destination in 5 minutes. He’s “Chance,” after all, he lives for the wager. He’s happy to tell you about it.

If you saw the Venom movie, first of all, Tom Hardy’s performance was completely inexplicable, right? Like what was that? But, also, Carlton Drake & The Life Foundation will be familiar names to you. Back at the apartment, Sandy gets ready to go home, and Peter & MJ wander into the bedroom for “dessert,” Peter picking up his Gambit impression again along the way, and then we move to The Endicott Building, where a board meeting of The Life Foundation is in progress when Chance flies up and knocks on the window. Once he’s let in, they get down to business.

So, Chance is sent to go steal the very guns that Joy sent Peter out to get pictures of, and the stage is set. Spider-Man is already at the pier, waiting to get some good shots when Chance shows up.

Chance convinces the soldiers to stand down, then has one of his goons surface in a whole submarine! That’s expensive! Up in the shadows, Spidey thinks if he lets Chance get away and then gets pictures of Spider-Man capturing him, he can turn this into 2 paychecks. He worries that it’s risky, but he knows Chance doesn’t kill anyone he’s not being paid to kill, so it should be ok. Then the power goes out. It’s a massive blackout in New York, part of the Fall of the Mutants crossover happening in the X-Books. It’s all connected! Now Spidey’s really nervous.

The enraged Spidey is getting past everything Chance can throw at him, so he pulls the oldest trick in the book and endangers others to make good his escape.

Another thing McFarlane really pushed that wasn’t common when he came around is unusual page layouts, as has already been obvious in this issue. This page’s is particularly odd. Back at The Endicott Building, Chance is ready to accept his payment. Drake insists that he sign a receipt, and Chance is electrocuted when the pen touches the paper. Drake says they don’t want him dead… yet.

Still learning to navigate this new phase in their new relationship. But, hey, look at this:

Speaking of Venom… But, imagine you’re just a regular, unsuspecting Spidey fan in 1987. That page would be prrrretty shocking, I’d think. Next time, we wrap things up with Chance and The Life Foundation.