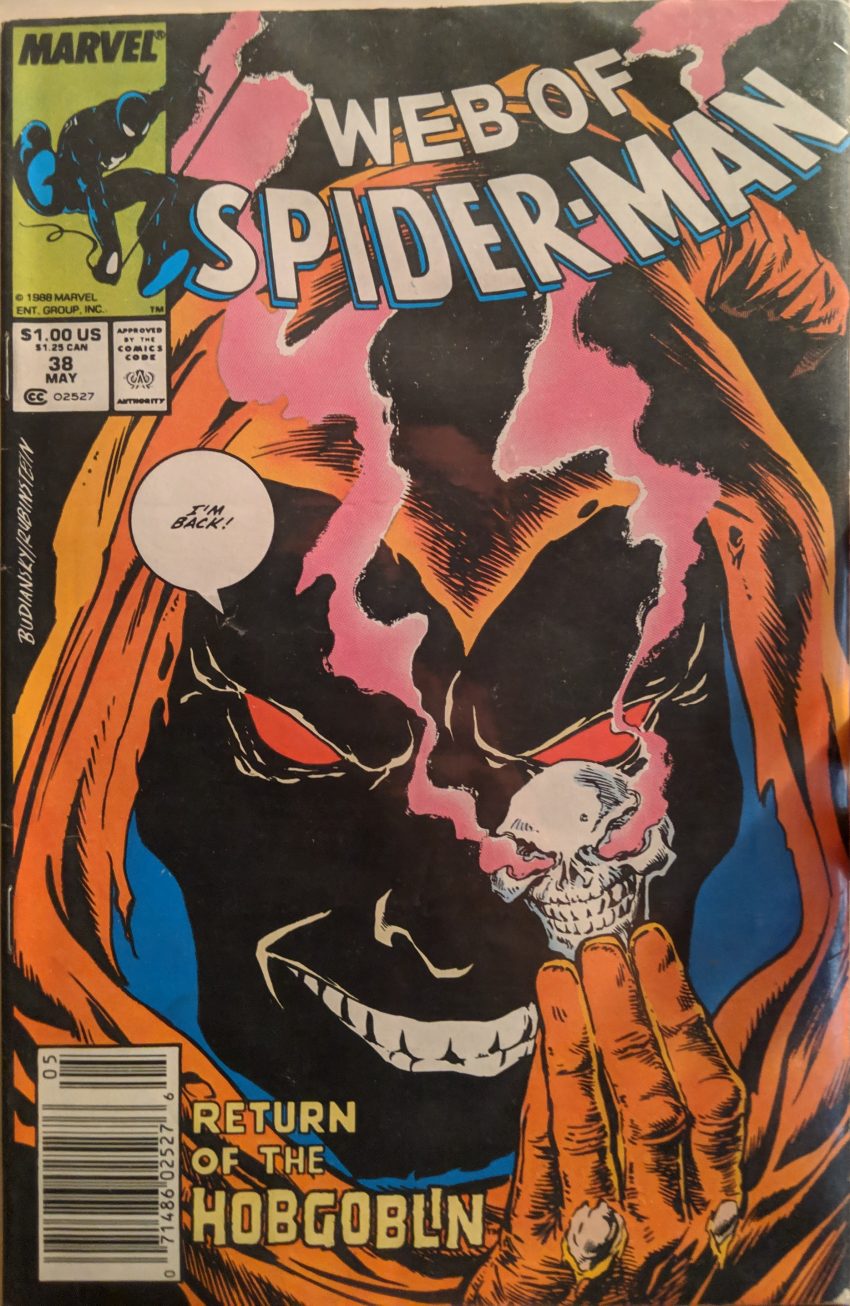 He’s back! This issue finds recent ASM artist Alex Saviuk settling into his new home for a long while. He’s joined this month by (future Deadpool co-creator) writer Fabian Nicieza, inkers Keith Williams & stalwart Mike Esposito, and colorist Janet Jackson (As ever, not that Janet Jackson). It’s been 11 whole months since the last Hobgoblin story. That’s a record, at this point. With the original, more than 4 year long Hobgoblin mystery/fiasco complete, and a certain wildly popular villain making his debut soon, Hobby is about to fade in stature around here. Let’s see if I can talk about this without spoiling the end of the Hobgoblin mystery. Only myself to blame for being in this position. Hobgoblin kicks this issue off by assaulting The Kingpin’s building. Just.. goin’ for it.

The Arranger comes out and just talks to him while he’s mowing down all Kingpin’s dudes. Ok, I’m going to say this much, at least: It’s not the same Hobgoblin. Someone was unmasked as The Hobgoblin, and that person isn’t him anymore. And the audience knows who the new one is, at this point, no more mystery. This Hobgoblin is much more deranged and bloodthirsty than the last, and as he demands to know why he’s not getting jobs from The Kingpin, Arranger essentially tells him it’s because he’s too deranged and bloodthirsty. He says maybe if he can kill Spider-Man, they’ll give him a chance.

If you want to big up your new guy, having him just chuck the face of evil in these parts for the last 4+ years out a window is a way to do it, I suppose. Hobby summons his glider, just barely avoiding an early death, and vows to kill Spider-Man and then come back and kill The Arranger. I’m gonna guess he accomplishes neither, but who knows? Meanwhile, at 410 Chelsea Street, a raging party is happening at The Parker Residence, and Mrs. Muggins comes barging in looking for him. This tiny apartment is packed with familiar faces.

Is that Spuds MacKinzie?? Oh my god, it is. Kids, ask your parents. Adults under 30, also ask your parents. As the party rages, Mrs. Muggins picks her way through it, and MJ goes to check on Peter, getting the snacks ready in the kitchen. You’re not gonna believe this, but the party was her idea.

I kinda love that Mrs. Muggins has noticed the long-held notion that Peter must be an “everyman” has nothing to do with his love life. Saviuk does a fun job selling the chaos of the room on these pages, too. I think the old guy running around hitting on all the girls is the less frequently seen Mr. Muggins, but that oddly isn’t coming up. Peter then meets several of MJ’s fellow models who ask him about his job and whatnot, but then the phone rings.

Wild. There’s so much business going on in the background. I would absolutely love to hear the Mrs. Muggins/JJJ conversation, but it’s too late, were off to another encounter. I am enjoying this enough to post still more of it.

Todd McFarlane cut the mullet in ASM (For now), and Sal Buscema isn’t drawing it in TAC, but no one seems to have told Alex. Oh, hey, this a Mark Jewelers variant! I didn’t think I had any, or if I do, I haven’t opened one since I found out what this is. It’s a jewelry company, obviously, and for some reason, for years and years (There’s a Mark Jewelers Variant for WEB 4-78, for example), a variety of Marvel comics were published in a regular version, and a version with a glossy 4-page insert in the middle hocking rings and stuff. This has that. Huh. Anyway, Hobgoblin is out flying around, trying to figure out a good place to fight Spider-Man. He recaps his backstory for a page, which I am obviously going to avoid for now, before hitting on what he thinks will be the perfect battleground. Meanwhile…

Pure chaos. This party should have been an entire issue with no subplots. I don’t know who Dick Wagner is. Wikipedia says a Dick Wagner wrote songs for Alice Cooper and played with KISS. I dunno. The point is, Harry Osborn is on the phone, calling from his car phone because it’s 1988 and he’s rich, to say The Lincoln Tunnel is all backed up, and the radio says Hobgoblin is causing it. Given their history, Harry’s pretty freaked out. I don’t know why he called Peter, though. He just exposits this and then hangs up. Did he want Peter the help? To call Spider-Man? Did he just want to say why he’s not at the party? Peter tells MJ he’s gotta go, and she’s none too pleased, but what can she do? And then…

Guys. Spider-Man is drunk. This is not something we’ve seen before. And he doesn’t seem to know it. Guys! It’s the 80s. I bet someone spiked the punch! Totally happened all the time in 80s media! Oh, man, he just found the Hobgoblin. He dives into battle, misses, barely lands on his feet and misses with another web. He says he’s just toying with Hobby, but that is clearly not the case.

NAILED IT! Oh, this is getting weird. Spidey lunges back into battle shouting, “C’mon, Hobby, I’ll show you who’s drunk!” and that goes about as well as you’d expect. Soon, Spidey has managed to accidentally web himself to a giant antenna. He manages to slip free just before Hobgoblin can ram into him.

He’s threatening to EAT him??

So, Hobgoblin’s got Spidey now, except he doesn’t. The zap he took has shorted out the cybernetic controls to his glider, so as he swoops in for the kill…

In this issue, this fight could only end in a Looney Tunes moment. This comic started out with Hobgoblin murdering like 15 dudes and ended like this! I was not prepared. So, then, we’re told a while later, Peter arrives back home carrying some groceries. He thinks that he’s never been much of a drinker, and now he sees why. Right about then, Harry & Liz finally arrive, and they help him take in some of the groceries. As he gets up the stairs, he says the ride on top of a bus sobered him up, and now he’s twice as angry as he gets to the door.

What a wild issue. Thoroughly entertaining. They really sent Peter’s old apartment out in style. Come back next time for a personnel change that no one could’ve predicted will begin a massive shift for the entire comics industry.