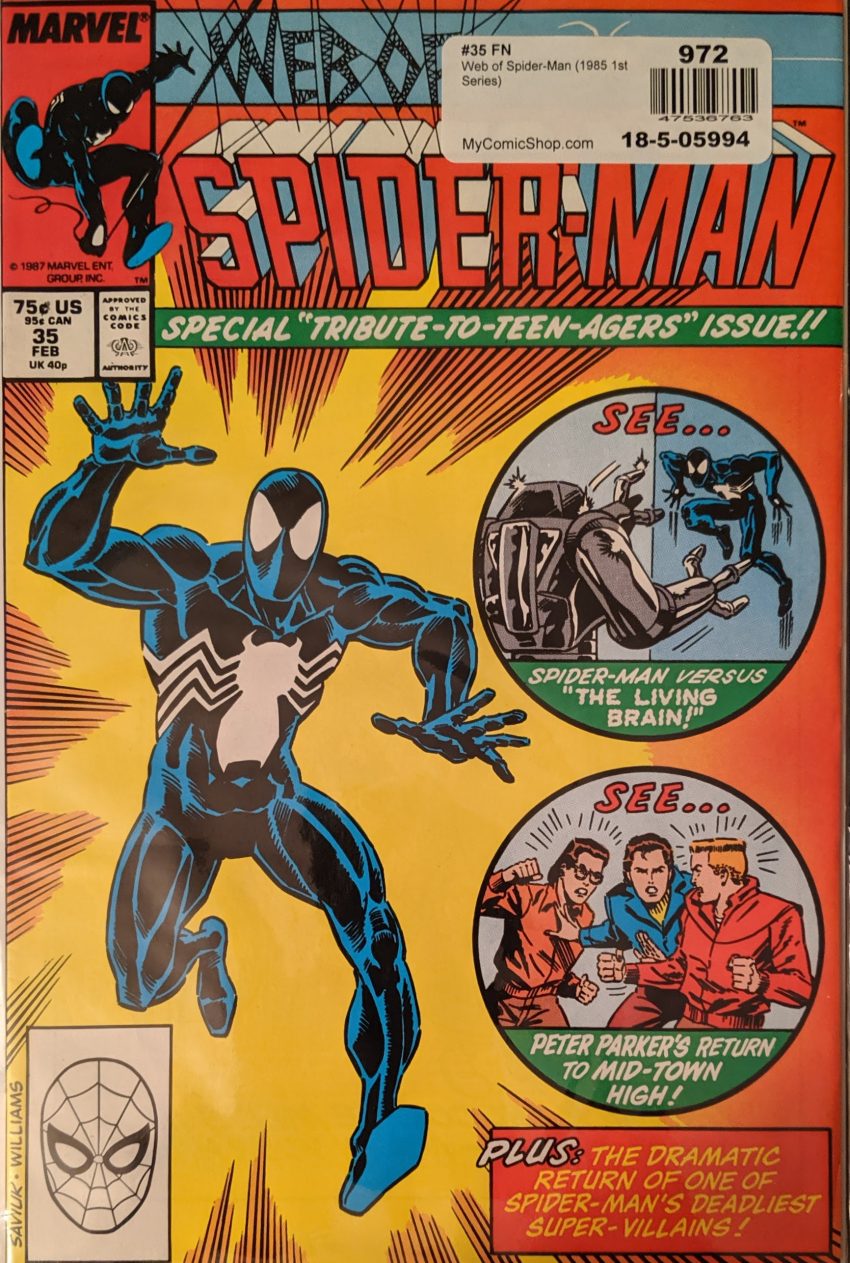 Suddenly… Gerry Conway! The infamous 70s Spider-Scribe is back at Marvel and on WEB for a couple issues. And he’s brought recent ASM penciler Alex Saviuk with him, settling into his home for the next several years, along with what will be the rest of the WEB art team in inker Keith Williams and colorist Bob Sharen. This book is going to shuffle writers around for awhile, but the art team is solidly in place. This cover is an homage to ASM 8. It’s so similar, homage might not be a strong enough word. Let’s find out why! Maybe! As the story opens, Spider-Man is swinging toward his old high school to work as a substitute teacher. Really?

Will he? Well, ok. We’ll look forward to it, I suppose. Peter switches into normal clothes while taking stock of the school, which looks way more run down now, and is filled with hilarious punk caricatures. And among them, Peter finds…

Are we really going to do this? It was random enough for Peter to become a teacher out of nowhere, but now he’s gotta run into perfect remakes of him & Flash? Even more improbably, as Peter breaks up the fight, the nerd recognizes him. Peter is apparently the only person to ever win the Queens science fair from Midtown High. The kid, who is named Steve Petty, says Peter is his hero. HOW VERY CONVENIENT. Peter doesn’t like the cycle of violence he’s seeing and tells Steve to meet him for lunch. After that, he goes to meet his class, which is full of punk and hip hop cliches who hate him. Suddenly, we cut to a town in an unnamed South American country. Really! Where a killer called “La Arana” is going about his work.

Well, that was pleasant. Web of Spider-Man: Your source for children getting shot. Back in high school, as Peter’s class breaks for lunch, he meets up with Steve, who shows him a surprisingly advanced lab in the basement. He says he dad used to work for “ICM” (Get it?) and donated most of it. He also hurriedly closes a door so Peter won’t see a green robot inside. The cover did promise obscure foe The Living Brain, after all.

Aaaaalright. Moments later, Steve is in the cafeteria, and while the girl Ronda tells Jake to apologize to him, Steve trips and spills food all over him, and soon Peter has to break up another fight. Steve storms off before Peter can try to make them talk it out.

So, there’s your twist. This time, Puny Parker is the bad guy. Steve sends The Living Brain to try to, I dunno, kill Jake, forcing Jake & Ronda to run. They try to hide in the driver’s ed car, but The Brain just flips it with them inside before dragging Jake out by the throat. Luckily, that’s when Spider-Man swings in. He takes down the robot pretty easily in a single page, and thinks he better go find Steve. Except…

The Brain starts barreling toward a wall with Spidey in front of it, but he gets his feet in front of him and pushes off with his considerable strength, throwing them both back violently.

Just in case there wasn’t enough coincidence in this issue for you, I guess. The Brain throws Spidey through a window and into the school, where he has an idea and stumbles toward the elevator. He forces the doors open and drops into the shaft, but he’s pretty messed up. Steve sees all this through The Living Brain’s eyes and has it follow him.

We briefly cut away to see that mercenary called “The Spider” in Spanish is being tapped to be the new Tarantula. How convenient! Then, back to the high school for the wrap up:

I hope Steve really isn’t in there, since you decided to just admit to being Spider-Man. What a strange, strange issue. And it gets stranger! If you think this means La Tarantula will soon be menacing the pages of Web of Spider-Man… you’re wrong! Maybe there will be more on that next time.