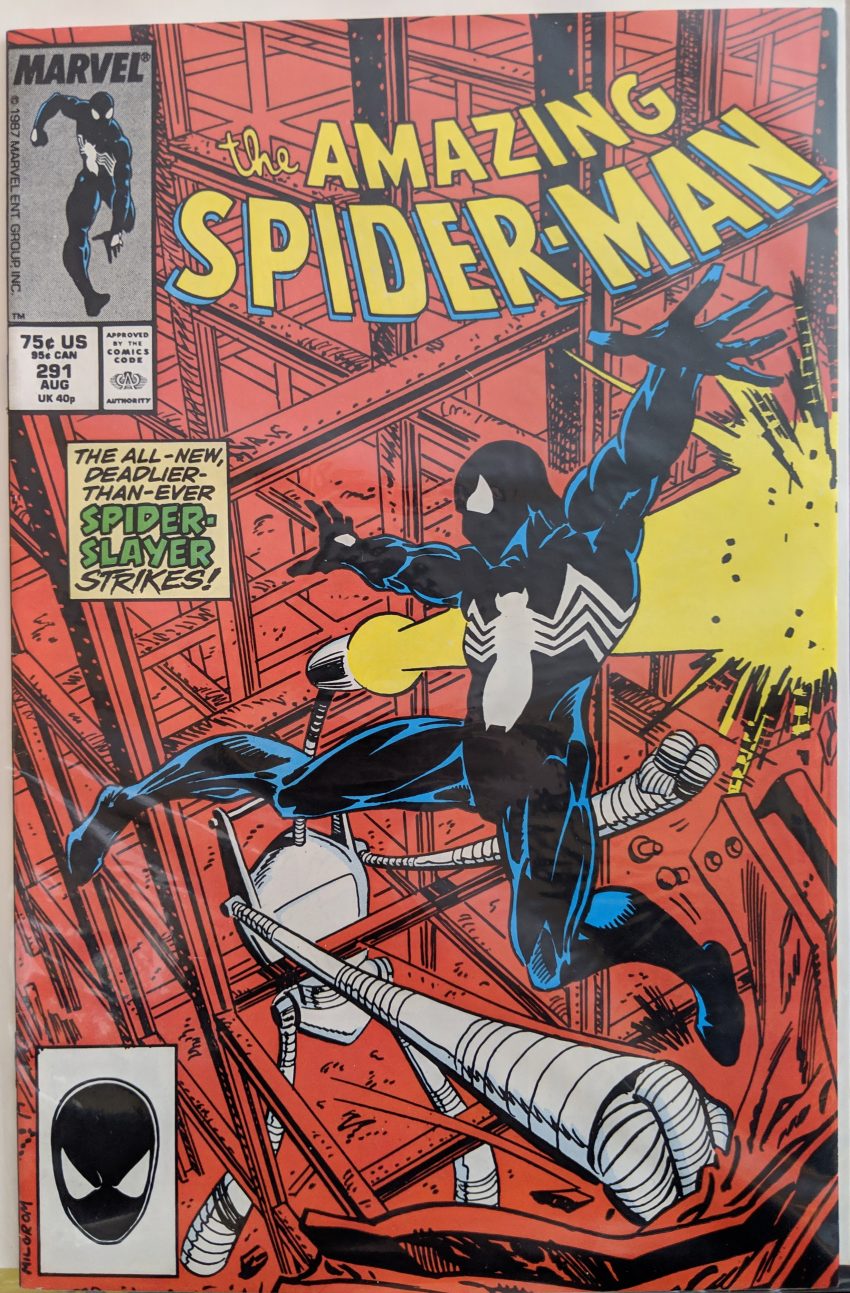 Romita, Jr. switches to just layouts and Colletta to finishes, and George Roussos tags in on colors for this one. Also:

MJ says it’s just “girl stuff” and that Peter understands, even though he doesn’t. He follower her out to the sidewalk as she hails a cab, wondering how he can get her to trust in him to help, when his Spider Sense goes off… for a second.

This month’s Web of Spider-Man is #29, to be reviewed in a later batch. Peter referring back to issues as old as 18 seems odd, right? Orrrrrr is Michelinie porting a subplot from his WEB run over to ASM, one that’s going to be huge soon? I mean, 50/50 shot. Safely hidden in an alley, that van unloads the robot on the cover, although it’s purple inside, and it begins to scale MJ’s building. And then it smashes right into her living room! But it hears some nosey neighbors talking about calling the cops on the noise, so it retreats back to the van and leaves. We check in with Peter walking home troubled, thinking MJ wouldn’t even let him go to the airport with her, and then we see where the robot went.

This guy first showed up in ASM Annual 19, also to be covered at a later date, with a pretty different deal. He was sort of played for laughs there, but now he seems more serious. On her flight, MJ frets that she should have let Peter in, that he’s the only one she’s ever told about her family, and now she’s going into a scary situation alone when she didn’t have to. In New York, Peter frets that he still wants to find a way to help MJ, but in the end, has to respect her wishes. And elsewhere in New York, Smythe unleashes a small army of mobile versions of the spy eyes his dad used waaaaay back in ASM 105 to scour the city for Spider-Man. Landing in Pittsburgh, MJ nervously arrives at her sister’s address, but no one answers the door.

Look at this! A family, a backstory, a plot of her own! Poor MJ was never a very well-rendered character before ASM 258, and this is a nice step forward for her. Back in Manhattan, Peter suits up to clear his head in his usual swingin’ fashion, and Smythe spots him in no time. All he wants to do is prove he’s better at killing Spider-Man than his dad was. He’s got issues. Back in Pittsburgh, MJ has made it to where her sister is: prison! Gayle is not happy to see her sister, though, and MJ is floundering trying to talk to her. Gayle cuts her off and asks her what she wants.

The secret of superhero comics is they’re a soap opera with more frequent explosions. What’s more interesting here, MJ’s family drama, or Spider-Man about to fight a robot? It’s no contest. We’re gonna do both, though. But, also: Four years? Is Gayle saying it’s been four years since… since sometime before Amazing Fantasy 15?? I don’t think MJ’s meant to have seen her since her first appearance in this title, and Peter did 4 years of college and a year or two of undergrad since then. And as we’ll see one day, while it didn’t come up when she revealed she knew Peter’s secret (Which is weird, right? That they didn’t discuss how she knows it?), it will eventually come out that she saw him go out as Spider-Man the very night he avenged Uncle Ben’s death, looking out the window of her Aunt Anna’s house. So… four years does not work for me. Well… that was a tangent. Anyway, Spider-Man’s danger sense tells him to move.

Smythe explains that the electrocution he experienced in their last encounter scrambled his nervous system, causing his current medical issues, and if you think he blames Spider-Man for the results of his making a robot to kidnap and kill people as a function of his weird daddy issues, you’re right! Smythe tricks Spidey into breathing a cloud of chemicals, the same stuff his dad used to weaken Spidey in the old days. Things are looking grim, and Spidey thinks he has to do something before the Spider-Slayer…

The Sam Raimi Spider-Man movies’ scenes where New Yorker stand up for Spider-Man weren’t the first time someone tried that idea. The construction worker smashes down on the robot’s arm, freeing Spidey and rendering the arm useless. Smythe sees he’s beaten and flees.

That last panel is extremely similar to one we saw last issue, and yet now Colletta is finishing instead of just inking, so it doesn’t look as good. That’s comics for ya. Back in Pittsburgh…

Egads! Who could it be? Can you guess? It turns out Smythe’s gas cloud also coated Spider-Man in a trace chemical, which he can uses to hunt Spidey down with his robot van. But when it almost runs down an old lady and he has to crash it into a taxi, and a cop shows up, he has no choice but to run in the robot. Meanwhile, Peter’s at home, feeling guilty now that he knows Smythe got hurt in their first fight, ‘cuz that’s what he does, when he sees a news report about the robot on the streets. He’s suiting up to go after it when…

The tracer indicates to Smythe that his prey is at ground level, and moving. But the cops show up, and he’s forced to flee again. Two hours later, we catch up with Smythe at Kennedy Airport, where his tracer tells him Spider-Man is close.

Things are about to get exceptionally weird in Pittsburgh! I got this one and 292 at some point in adulthood, but I don’t really remember when or where. I’d had the proposal for years, had to see how it went. And I did, and you will too, next post.