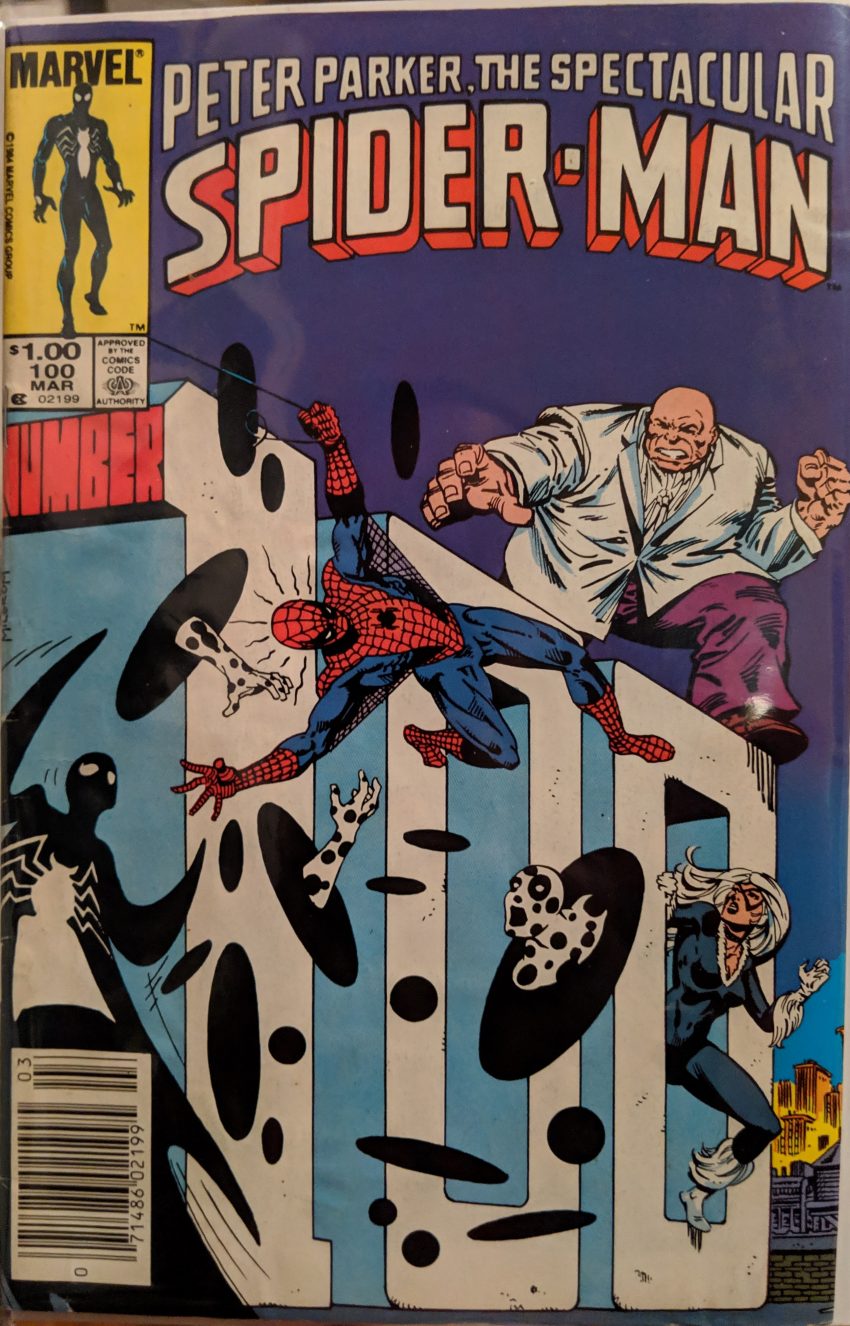 Here we go with the 100th issue spectacular of Spectacular Spider-Man. Al Milgrom is back on pencils, and this time he’s inked by Geoff Isherwood (With 5 pages by Vince Colletta), and the difference between Isherwood & Jim Mooney’s treatment of the pencils is pretty striking. It opens with The Kingpin in his workout undies beating up Spider-Man and Black Cat! Just kidding, it’s two people dressed like them. This was apparently his trainers’ idea, and he hated it, saying it’s beneath him.

Ohnn recaps his super origin and then learns that, if he concentrates, he can make all the weird crap all over him coalesce into a single big spot on his chest, easily hidden by clothing. So he lets Kingpin in. He uses the power outage he caused as an excuse for his lack of progress, and Kingpin departs. He’s off to see someone more important to him.

Not a fun time. But speaking of fun times, Peter Parker’s trio of new neighbors is trying to decide whether to invite him to the beach with them. They ultimately decide against it since they think he got in really late. He’d much rather go with them than be having this nightmare:

He’s awakened by Sha Shan so they can rehash the same conversation they had last issue. He decides to go see Flash, gets in his Spidey suit and takes off. He arrives just in time to see Sha Shan & Flash have another fight in front of their building. He still refuses to tell her where he goes, and all-but accuses her of cheating on him with Peter before jumping in a car with some dudes and leaving. Spider-Man follows… all the way to a high school football field on Long Island. Where he suits up and plays for a bit. So, that’s the deal? Flash has been sneaking out before sun up to… play football?

Yikes. Our man is really conflicted about what to tell Sha Shan, if anything, at this point. He swings off fretting over that and what Flash & Betty are up to and randomly reiterates how he got rid of his black costume for the millionth time. But then…

Extremely bad news! The real Spider-Man swings back home and decides he’d rather go after Kingpin alone tonight. So he calls Felicia and says he’d like to postpone the attack, and she’s all-too happy to agree. Then, that night, they both suit up and head out to invade Kingpin’s tower without the other. Whoops! Kingpin’s goons spot Spider-Man on his way and prepare for him, while John Ohnn gets back into Spot mode to go try to fight him again. He covers the rooftop security camera, though, so Kingpin and his men are alarmed for a second, until they get Spidey on a different camera. But…

Spidey tries to get Spot in a big web net, but he grabs a bunch of his holes and the web shoots harmlessly into another dimension (Interdimensional littering!). As they keep up their fight, Black Cat shows up, and she sees them before they see her. Using her bad luck powers, she just walks right into Kingpin’s building.

Kingpin instructs his goons to just let her in, since they probably can’t stop her anyway, and to figure out where Spider-Man went. I’m not sure why they can’t see this fight if they saw him on one of their cameras a second ago.

As they keep it up, we take a look at the poor sap the alien has been swinging around on, as they crash into an alley and the alien lets him go.

That can’t be good! Back at the building, Felicia kicks her way out of the air vents to find herself surrounded by goons, while Spider-Man keeps trying to outmaneuver The Spot on the roof.

Black Cat makes a break for it toward a dark room, thinking her “cat-like eyesight” will let her finish the goons in there, we cut to Spidey still working over The Spot, and then we find that dark room is The Kingpin’s office.

(We’ll see that issue of TAC someday, it’s on the agenda) Spider-Man has just been walking through Spot’s barrage of attacks, just taking it, but finally…

Well, there you have it. And I owe Milgrom an apology for Spider-Man randomly banging his knee several issues ago. It was the kind of crappy plot beat you’d see in some of the worst MTUs we’ve seen, but turns out, there was a reason for it. Good deal. Just moments after Felicia runs out, all Kingpin’s goons get tossed into the office, courtesy of… well, you know who. He says he had to “mop up The Spot,” but Kingpin legit doesn’t know what that means. Then he demands that Kingpin leave Black Cat alone, and Kingpin says they just had a chat that ended with that very outcome. Spidey refuses to believe Felicia was here, but he knows Kingpin isn’t lying. Angry now, he just launches an attack.

As they keep wailing on each other, Felicia finds her way to the roof, where The Spot has rather hilariously been left to pick up all the holes he threw out during the fight earlier. He’s still shook from his beating, so he panics when Felicia asks what he’s done with Spider-Man.

The battle continues to rage inside, with Kingpin ripping a whole spiral staircase down and swinging it as a weapon, it’s pretty brutal, but Spider-Man manages to stay ahead of him. As they fight, Felicia stays on the roof, unsure of what to do with herself after The Kingpin’s revelation.

As Spider-Man gets the upper hand, Kingpin deploys the one strategy Spidey couldn’t predict: He calls the cops. As he’s technically a clean businessman, it would be easy to claim Spider-Man has broken in and attacked him for no reason. Kingpin suggests that Spider-Man leave, and incredulously, he does. The cops are already arriving down below, so he swings up onto the roof to find Black Cat. She admits she came here for the same reason he did.

And so, Spider-Man’s strangest relationship comes to an end.  It’s really weird to me that their relationship mostly played out in Spectacular. TAC has always sort of had its own thing going, like the way Peter hung out with his 60s friends in ASM and his new college friends in TAC and whatnot, but his romance of the moment seems bigger than that. Even Deb Whitman frequently appeared in both books. Plus, his relationship with Black Cat started in ASM. I dunno. Just odd. But, also, their relationship was a tire fire, so it’s a good thing it ended. It’s easy to see why both creators and Peter himself would’ve given it a shot, but it’s been nothing but weird and gross for a year now. Time for a new chapter.

Speaking of new chapters, after 15 issues as artist and 10 as writer, this is it for Al Milgrom on the book. I don’t know that I’ve ever given him a fair shake as an artist. My first exposure to his work would’ve been in the late 80s, early 90s, and it was frankly not very good, but he’d been in for a long time at that point. This older material has been much better than I expected. His writing… certainly had its ups & downs. But it’s interesting to me how fluidly he picked up where Bill Mantlo left off. He was way, way, way too into recaps, but the voice of the characters and Mantlo’s unresolved plot threads all continued pretty seamlessly, and that’s a cool thing. Consistency is nice. Come back next time for the debut of Web of Spider-Man.