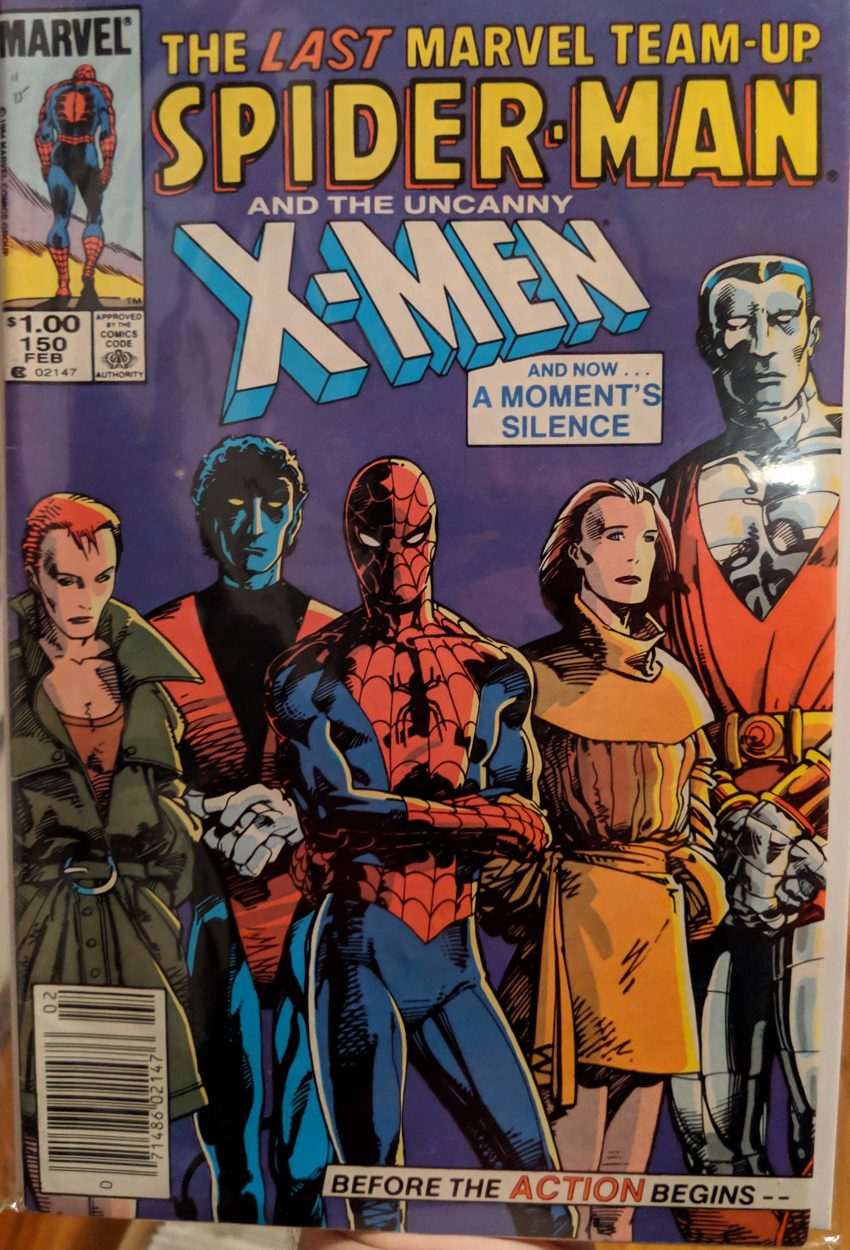 This somber cover brought to you by one of comics’ true fine artists, Barry Windsor-Smith. Poor Spidey looks so sad up in the corner box. By 1984, there’s no question that Spider-Man and The X-Men are Marvel’s biggest successes, so who else could you get to end a series called Marvel Team-Up? Greg LaRocque is back on pencils and Bob Sharen tags into the ever-changing colorist job as Spider-Man comes home from a hard day of Spider-Manning to find his landlady, Mrs. Muggins, banging on his door demanding the rent. He doesn’t have it, so he figures he might as well just head back out, but…

Yes, it’s the debut of one of the odder Spidey subplots: Bambi, Candi & Randi always being on the roof sunbathing, making it tougher for Peter to get out of his skylight. Trapped, he quickly makes it look like he’s been in the shower and answers the door. He tries to fake outrage over the noise on the roof, but Candi is Mrs. Muggins’ niece, and she sees right through him, anyway. He promises he’ll have the rent on Thursday. Now he’s just got to figure out where it will come from, and he still has to buy a birthday gift for Aunt May somehow, too. Speaking of birthday gifts, we join an airplane somewhere over a jungle in Asia…

The North Korean Army is down there training when Juggernaut hits like a bomb. When he crawls out of the crater speaking English, they try to fight him, but come on, he just fell out of the sky and got up.

We all remember that one, right? X-Men fans among you may have guessed Juggy is headed back to where he first got his powers, The Temple of Cyttorak. His plan is to retrieve the ruby that gave him said powers and give it to his best buddy so he, too, can become a Juggernaut. One wonders if maybe only one person could be The Juggernaut at once. I suppose we’re about to find out. Back in New York, Peter Parker returns home from a long day of not getting any good photos for The Bugle, and runs into his sunbathing neighbors in the hall. They heard he was complaining about them, but he says it was just to distract Mrs. Muggins.

We leave Peter to what seems like a pretty good evening to go visit The X-Men, who are training in The Danger Room, as usual. Today’s contestants are Colossus and Rogue, with Nightcrawler running the machines. They get into situations that let all 3 of them explain their powers to us and then The Phoenix psychically summons them to dinner.

The situation with The X-Men is markedly different from the last time they appeared here. Back in Manhattan, Peter Parker is relaxing at home, thinking he needs to develop his photos of the girls, who asked if he could get them in The Bugle, and worrying about Aunt May’s birthday when he, too, sees the news about The Juggernaut, and decides he’s got to go look into it. As he gears up and leaves, he recaps a lot of his recent life, from losing his black suit to MJ’s revelation to Liz & Harry having a baby and whatever, this is happening a lot lately. He tries the spot where he buried The Juggernaut and sees nothing out of the ordinary, and then thinks maybe he’ll swing by Saks and price hats for Aunt May. Elsewhere in New York, Juggernaut is already back, and he’s just arrived at Black Tom’s birthday to give him his present.

Well, I guess that answers that. Two Juggernauts seems like a problem worthy of a 150th anniversary/concluding issue! We cut to the X-Men using Cerebro to locate Black Tom and then heading into the city before going back to the party, where Tom is, uh, less than pleased. He demands to be put back to normal, and when Juggernaut says he can’t, he get thrown out the window if the high rise.

Can New York survive two warring Juggernauts? As they fight, they blow up a gas tank, and Juggy realizes he can feel the fire. Tom can, too, and notices Juggernaut is looking smaller than usual. You can see where this is going. And that’s when Spider-Man finds them. He thinks Tom is trying to stop the Juggernaut, so he’s content to take some pictures until Juggernaut notices him. The two villains sharing his power quickly decide they can put aside their differences to kill Spider-Man, and now we got ourselves a fight.

Spidey manages to avoid getting smashed and almost loses his camera in the mess, but he’s clearly in trouble. Juggy & Black Tom patch things up, and while they’re doing so, Spider-Man webs up the whole street in front of them. Ever eager to please, Juggernaut wants to show Tom how he can just walk right through the web, but when he steps on a manhole cover, Spidey webs it out from under him. Losing his balance, Juggernaut is catapulted right back into Tom. Two Juggernauts are looking easier than one until Tom recovers the shillelagh he shoots energy beams out of (Look, I don’t come up with these things) and zaps him from behind. Things are looking grim… until…

In Secret Wars, Spider-Man accidentally eavesdropped on The X-Men when they decided to team up with Magneto as long as they were on Battleworld, and got the wrong idea. Also, in the future Rachel Grey, aka Phoenix, comes from, Black Tom’s situation is more complex, so as the battle really gets going, the most powerful X-Man is having trouble getting involved. Colossus saves Spider-Man from a whole building Black Tom has knocked over, and Juggernaut throws a car at him for his trouble. Phoenix destroys the debris so no one can get hurt, while Nightcrawler does his thing, teleporting all around Tom in an attempt to wear him down.

So now Rogue is half a Juggernaut and Black Tom is back to normal. She attacks Juggernaut with her new-found power, but when they come into contact, her portion of the power leaves her. And it doesn’t go back to Tom. As the X-Men try to free Rogue from Juggernaut’s grasp, Spidey notices the gem on the ground. Colossus manages to pry the Juggernaut’s telepathy-proof helmet off, only to reveal a smaller one inside, which is kind of hilarious. So Rogue reaches up and grabs him, and for a moment, she’s now the whole Juggernaut, and as her mind is overwhelmed by his…

Luckily, she burns out quickly. Unluckily, the weakened Juggernaut saw the gem on the ground while he was down there, and grabbing it, is back to full strength. His first act as the renewed Juggernaut is to throw the gem, allegedly into orbit, so no one would ever take his power again (Decades from now, Colossus will still manage to do just that). Then he rips a hole in the ground, grabs Black Tom, and dives in.

Spidey refused to give up against the Juggernaut when he couldn’t possibly survive, and managed to win anyway, and this whole team of X-Men is like “Nah, man, we’re good” as soon as they get an out. I see how it is. Anyway, the cops show, and nobody here is beloved by the authorities, so they all scatter. Peter can’t wait to get to The Bugle to develop his film, but when he does, he finds the shots are all ruined.

And believe it or not, that is the last page of Marvel Team-Up. Spider-Man’s day is saved by photos of bikini girls. MTU was a series of wildly varying quality, but the chance to see Spider-Man hang out with so many other heroes was pretty fun. Marvel has tried to bring it back a few times over the years (Most recently as a vehicle for Kamala Khan, Ms. Marvel), but it seems like the market for a book like this, which by its nature can’t be too deeply tied to continuity, has passed. About a month from this issue’s publication, Web of Spider-Man will take its place on the schedule In the Bullpen Bulletins page, it is announced this month that Jim Owsley is replacing Danny Fingroth as Spidey group editor, and Danny is going to be doing some writing. We’ll see how that goes for both of them here, but that also is for another time.