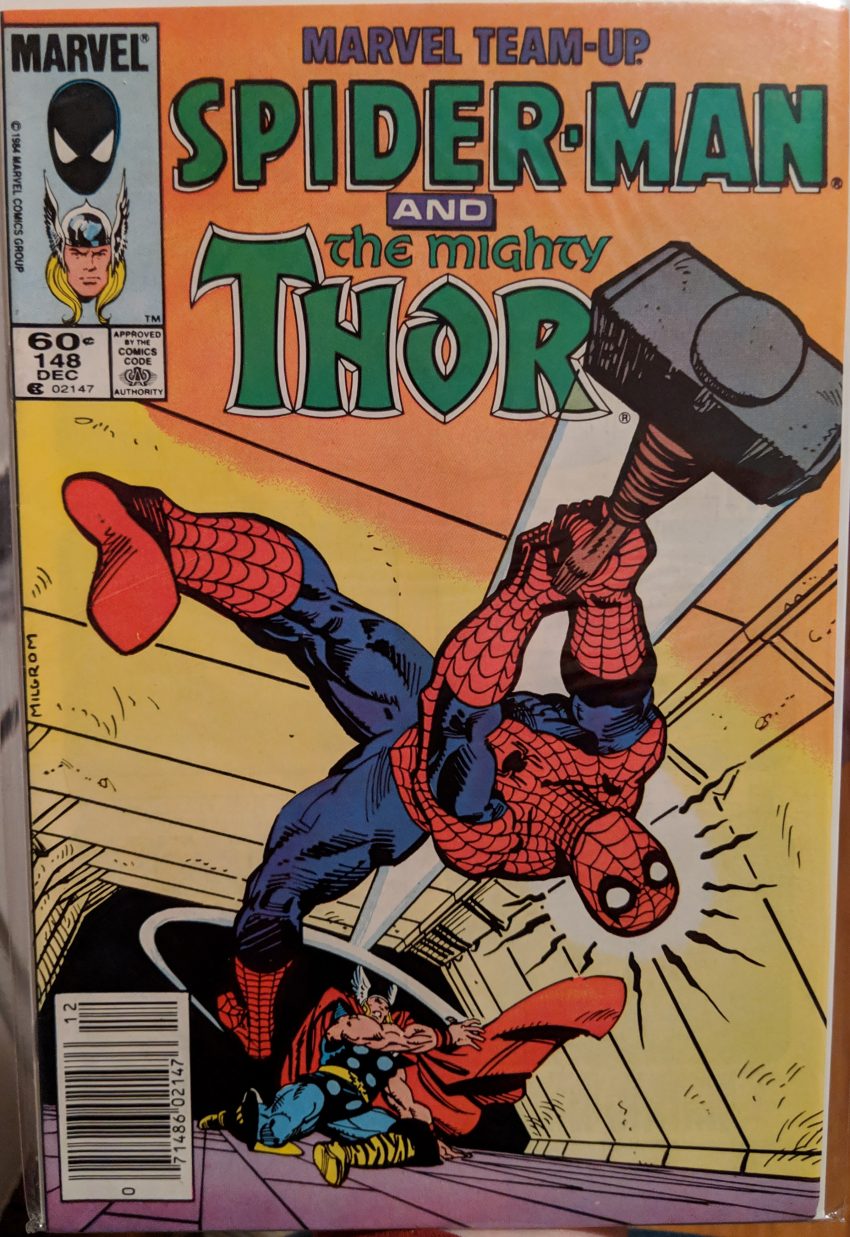 That’s a great cover. Been noticing that when he inks himself in this period, Al Milgrom does a lot more webs on the suit than everyone else. Also, he’s writing and drawing TAC while doing cover for MTU and maybe other stuff, too, he’s really working here lately. I’ve not traditionally thought of him as a particularly good artist, but I was also first exposed to his work in the 1990s, and I’ve begun to think maybe he was on the decline then, because his stuff’s been pretty solid here recently. Anyway, same team as last issue with the exception of George Roussos hopping back in the colorist spot, because The Black Abbott is still out there, and we gotta deal with that. At the top of the issue, Tony, the little kid from last issue, has gone from wanting to be a gang member to wanting to be a superhero, and in a homemade Nomad costume, tries to stop some graffiti artists. He gets beat up for his trouble and slinks off in shame and defeat.

How much money does this Black Abbott guy have, honestly? And why does he spell his name like Abbott & Costello instead of the church rank he obviously means, autocorrect gets so mad at me. I blame you, Cary Burkett, wherever you are! Oh, hey, Spider-Man’s  at a hospital. He’s been pretty busy lately, but his old buddy Steve Hopkins is still missing, and this is where the wounded Black Abbott was taken after last issue, so he needs to sneak past the police guard to get some answers. He uses his web to send a cart rolling down the hall, which the cops chase, and slips into the room. But then we find out where those ships Tony saw were headed…

Yeah, man, Sigurd Jarlson! During the legendary run of Walt Simonson, Thor has officially discarded the Don Blake persona (Way after the comics more or less began ignoring, too), but he’s picked up this one. A construction worker is frankly a much easier persona to drop in and out of than a doctor, so that makes sense, even if the extremely Norse name is a bit on the nose. Thor zooms out and stops the ships from firing anymore missiles at the hospital and takes one of them down, but the other already landed, and its occupant ran into the room. The cops, of course, are blaming Spider-Man, but then Thor swoops in.

Time for an explanation, and it’s… lame. Ol dude was a monk in “The Order of Dakoth-Kuru,” who sought to better themselves through meditation and “powerful herbal potions” (420, bro!). He says that while the average person uses “barely 5%” of their brain, these doofuses figured out how to use all 100%. Man, I hate this trope. That dumb urban myth is so widely disproven, but people who write godawful science fiction just love it to bits. And come on, dude, even those guys say we use 10% of our brain, “barely 5?” Maybe if all you do all day is mediate and eat herbs… Anyway, The Order Of the Lame Plot Device could now open portals and had telekinesis and all sorts of powers thanks to thinking real hard and smokin dat herb…

This does answer my biggest question from last issue, which was why did The Black Abbott personally go to Peter Parker’s apartment, but I guess when there 13 of you, you can get a lot done. Anyway, the brain-zappy machine last issue freed this guy from the hive mind, and now he knows the Abbott will stop at nothing to kill him. Exposition delivered, he passes out.

I think that doctor has more than a professional interest in Thor. Next there’s a quick cutaway to The Baxter Building, where Burkett chooses to catch you up on the black suit’s deal by having Johnny Storm tell Alicia Masters what happened, then we’re off to the monastery The Black Abbott is from. He’s heard Thor got involved, and decided he’d very much like to add a god to his wardrobe of bodies, so he calls back 7 of his other bodies from schemes happening all over the world to concentrate on nabbing Thor. Back at the hospital, that doctor isn’t the only one trying to get a piece of Thor, as a nervous nurse comes in to try flirting with him, but her hopes are dashed with the bald guy wakes up screaming. He says even freed from the Abbott’s control, he can still hear the mental summons, and that something terrible is coming. Thor says when Spidey shows up, they can go look into it, but the dude says there’s no time and they have to go right now, and he’ll lead Thor to the place. And I guess… he put his supervillain outfit back on before they left?

Thor really shoulda seen this one coming. He’s too strong for the Abbott’s mental bolts, but when he throws his hammer, the Abbott(s?) make one of their portals so he ends up throwing it at himself, and is knocked out. Whoops! They managed to move their big mind control machine to this monastery, and hook Thor up to it. Meanwhile, Spider-Man is back at the hospital, where an annoyed nurse tells him Thor & the patient mentioned something about going to The Upper West Side when they left, but that’s all she knows. This isn’t even the nurse from before, she just happens to know. I dunno.

Tony flagged down Spider-Man to tell him about seeing the jets from yesterday, and leads him to the hole he fell into earlier, and now it’s time for some Komedy Business:

Ho ho, what fun. Since he couldn’t get any back up, Tony decides to run back and warn Spidey, climbing back down into the tunnel. This can’t end well. Spidey’s already well into the compound, and eventually discovers Thor in the brainwash machine.

Spidey runs off with Thor and webs them into the basement, but Thor is still weak from the machine, and when the Abbotts break in, Spidey has to fight alone. Their mental bolts are as dangerous as last issue, and he’s not doing too good. Thor’s regained enough of his wits to summon his hammer, which smashes its way through the compound to come to his hand, and that revitalizes him enough to summon a raging storm inside the hangar, which knocks out all the Abbotts present.

Decades ago, before my time, when Godzilla movies were first imported to the US en masse and dubbed, they would name the precocious children who tended to show up in them “Kenny” in English. Old school American Godzilla fans refer to the kid who’s always underfoot and somehow connected to the action as “a Kenny.” This child… is a Kenny. The Abbott hauls Kenny, er, Tony into one of his aircraft and takes off. Thor is too weak to get up, and Spider-Man is too weak to catch the ship, and so…

Totally a Kenny. Spidey’s wrong about seeing The Black Abbott again. Black Abbott was allegedly one of the victims of The Scourge of the Underworld, a Captain America villain (Who we’ll see on this blog at some point) who killed supervillains, but his death wasn’t shown. The internet sez he was among a group of villains resurrected from the dead in The Punisher during the 2008 Dark Reign period, but that’s his only other appearance. Kind of a weird villain, but I liked his design. Next issue promises a new writer, a guest artist, and a new villain. That’s a lot of changes! We’ll see how that goes next time.