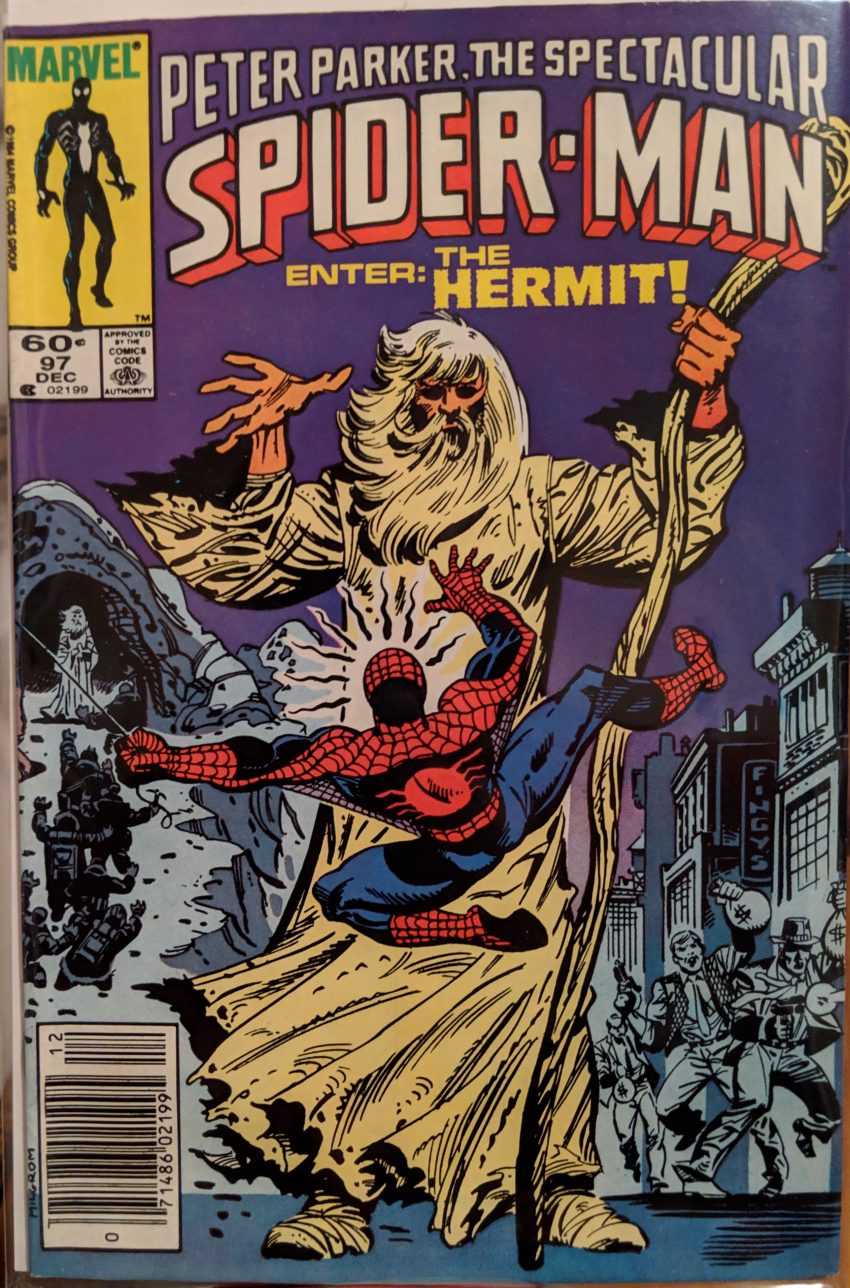 Doesn’t sound as exciting as Enter The Dragon. Speaking of not exciting, Herb Trimpe is here on pencils. Why? At least Jim Mooney will smother him in the same faux John Romita, Sr. style he puts on everybody, I guess. To start, Spider-Man spends a mindboggling FOUR PAGES recapping recent events while swinging around. Mostly the last few issues of TAC, but also how he lost his black suit and his deal with Aunt May right now and all that. My goodness. Comics in this era are around 24 pages of story per issue. ⅙ of this comic is recap so far. While wasting all these pages, Spidey hangs out near a Lotto Cola billboard. These have been popping up in the background lately. As he swings off, he says he suddenly really wants a Lotto Cola for some reason. He doesn’t seem to have actively noticed the gigantic billboard. That’s advertising for ya. Naturally, we cut the advertising firm that made the billboard. Where an army of business men burst into a room to force a dude to make some advertising?

Wut? That guy starts telling the other guy Timothy Quail’s life story. How he has been good at telling people how to influence others since he was a kid, but always wanted to be alone, and people would hound him for his insights. Like they’re doing at work right now, I guess. So he did what anyone would do and moved to live in a cave by himself in Tibet.

Haha, ok. This is feeling like a real filler issue. We get back to Spider-Man, whose Spider Sense goes off as he swings over some dudes loading a truck (Not how the Spider Sense works, Al), but nothing looks off, so he stops to talk to them. They act like regular joes, so he swings away.

He doesn’t come back or anything, that’s the end of the scene. Alright. Now it’s Timothy Quail time again, very exciting. He just finished his ad presentation, and is going home early because he feels rather tired while his buddies go off to have some drinks in celebration of his great work. However…

Holy Zoo Attractions, Batman, it’s The Penguin! I mean, I guess it’s not The Penguin for obvious reasons, but… looks like it. Quick cutaway to The Baxter Building, where the alien aaaalmost suckers Johnny Storm into setting it free by bunching up in the lid of his prison and seeming to have escaped. Reed stops Johnny before he can open the cage. Reed says the creature is even more cunning than he realized, and Spider-Man is lucky they got it off him. Guys, I think this is called “foreshadowing.” Now we go check on The Kingpin, further recapping recent issues of TAC, good grief! He thinks he needs to find a guy to replace The Answer as his number one supergoon, but doesn’t know where to look. Meanwhile, elsewhere in the building… I just want to point out that this comic is half over and all Spider-Man has done is talk to some guys with a van… Elsewhere in the building, Kingpin’s scientists clean up after last issue’s fight, since the secret stuff they’re working on is too sensitive for the cleaning staff. One of them checks the “Video Radiation-Scan Analyzer” (Ah, one of those old things) which pops up footage of Cloak in action.

I have realized who that is and where this is going. It’s about to get goofier in here. Hey, Peter Parker is going to The Daily Bugle! I guess this is a Spider-Man comic after all! He’s come to ask Robbie for some work, but Robbie says nothing’s really going on. However, he’s heard about some guys doing some daylight robberies pretending to be a moving crew, and he’d like shots of that. Peter, of course, realizes he got duped earlier in the issue. He leaves intending to look for those dudes when he sees Flash Thompson chatting up Betty Brant.

I don’t think that guy talking to that lady in the background is meant to look sinister, but it does. Now we move back to Timothy Quail, still in transit in that limo with Skinny Penguin, who wants him to plan a bigger job because the crime biz is getting crowded in New York lately. Quail worries about the risk.

They sure did just magically get in that helicopter, wow. Not the most natural panel progression. Spidey finishes suiting up and heads up to the roof, where Black Cat has just arrived. He called her over to talk about where she got her powers. Her favorite subject!

A romance for the ages! Spidey swings away, lost in thought as usual, when he happens upon what looks like… a marathon for obese people… but the guy in the front is Timothy Quail. They run by an armored car being loaded up, and guess what, they start robbing it. But Spidey didn’t let appearances throw him off this time, so…

Quail warns Spider-Man of a sneak attack because he doesn’t want to be party to murder, and tells Spidey he was forced into this. Spidey believes him, and swings him away to get the lowdown. Quail tells him his story and says he just wants to be left alone. Spider-Man suggests the answer to his problem is to “change his packaging.”

That was legitimately the worst issue I’ve read in awhile. And Trimpe is hanging around for 2 more issues. Ah, well. As predicted, his art is barely recognizable as his own with Jim Mooney inking, it’s not so bad. Maybe next issue will be better. First, though, some Marvel Team-Up.