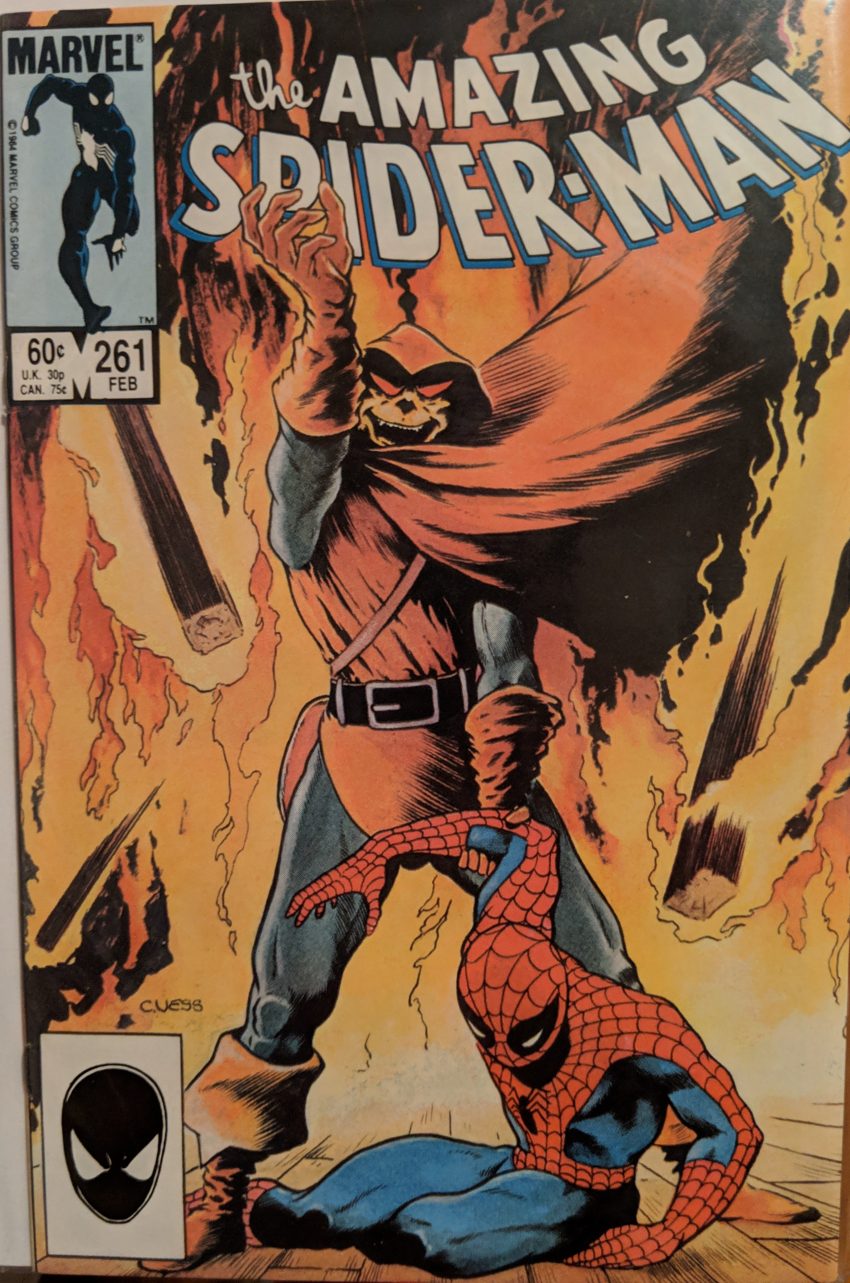 Ladies & gentlemen, Charles Vess! Charles Vess’ gorgeous art would just randomly grace Spidey covers on occasion in this era. He will later provide interiors for an issue of ASM and even do a fully painted hardcover graphic novel (A serious rarity in its time) about our guy, he’ll be around. Inside, though, it’s the usual gang, as we pick up with The Hobgoblin menacing Liz & MJ after their abduction last issue, Liz demanding to know what business he could have with her husband.

How indeed? Who is The Hobgoblin? Realistically, it seems unlikely that he would be anyone related to Peter or MJ’s world, but he certainly seems to be. Peter’s already known the guy behind the masks of 2 Goblins, surely he wouldn’t know 3. We’ll see eventually. Hobby leaves the girls locked in their store room in a big warehouse owned by The Rose, who he chats with for awhile. The Rose says his goons took MJ in case Liz went into labor (Not how I remember it), and then surreally says he’s glad The Hobgoblin has decided to move into his office space within the compound.

Be sure to fill out your paperwork for HR, and here’s your key to the executive bathroom! Just seems weird to me. All this is to get Harry to deliver his father’s journals, and Harry is right now tearing his storage apart trying to find some, with no luck until he happens upon an old desk.

That seems promising. As Harry drives out to meet The Hobgoblin, he doesn’t know there’s a Spider Tracer on the back of his car, or that Spider-Man is following him. Meanwhile, at The Baxter Building, a long-gestating subplot in John Byrne’s Fantastic Four run has a big impact on the world of this book, when a little drone somehow gets past the building’s defenses and starts snooping around.

Well, that can’t be good. Over in Central Park, Harry is waiting for the Goblin to arrive, but he’s 20 minutes late. He does finally show, though.

Hobgoblin picks up Harry and flies away, and Spider-Man follows, feeling bad for using his friend as bait. Soon enough, Harry is tossed into the storeroom with Liz & MJ.

Frenz’ Ditko worship has now extended to an homage to the cover of ASM 19. Hobgoblin wants to dig into the new journal immediately, but The Rose wants to discuss having him knock over more bookies tomorrow, so he lets it be. While that’s happening, Spider-Man begins the process of taking out The Rose’s small army of goons and sneaking into the building. Inside, Harry reveals he’s snuck in one of his father’s old pistols, and bangs on the door to get their guard to open it.

Mary Jane don’t take no mess, though I question how she managed to get behind the guy. At any rate, the former captives are now free to sneak through the warehouse and try to escape. But when they’re spotted by a guard, Harry finds his nerve and just starts shootin’, hitting no one and letting everybody know they’ve escaped… including Spider-Man. The Rose and his lieutenants make a wise retreat as The Hobgoblin rushes to confront Harry.

As the super-types get down to business, the civilians make a break for it. Trying to find the exit, they stumble upon Chekov’s Room Full of Goblin Equipment, and Harry has an idea. He makes Liz & MJ run on while he stops to do something. In the larger warehouse, Spidey has just dodged a pumpkin bomb that hits a fuel canister, and now the whole place is catching on fire. Hobgoblin decides to cut his losses, going to retrieve the journal and run for it, but then someone throws a pumpkin bomb at him for a change.

Lucky for everybody, the unconscious Spider-Man wakes up at this moment and rushes to the girls, but when he finds out Harry’s trying to fight The Hobgoblin, he trusts MJ to keep Liz safe while he goes to keep Harry from getting killed.

Spidey’s going all the way in on The Hobgoblin as Harry rushes to the girls, but they’re soon surrounded by fire and in a really bad situation.

Too bad. Spider-Man throws a forklift through the wall so everyone can escape as fire & rescue arrive on the scene. Liz is loaded into an ambulance to go have her child.

Back at his own secret hideout, The Hobgoblin is in bad shape, but is more eager to read the journal than to seek medical attention. However, he soon discovers there’s nothing in the list of safehouses that he hasn’t already hit.

And that’s sort of where we’re going to leave this era of ASM for awhile. There’s one left in this block, but it’s a fill-in. Got some TACs and MTUs and a couple of surprises to catch up on and then we’re jumping forward again. But we’ll get to The Hobgoblin’s revenge eventually. In the letter column, one Ronald Byrd says he’s gone back and looked for clues as to who could be The Hobgoblin, and declares that there’s 243 people who could be behind the mask. That is some in-depth reporting. I wonder if he even included the person(s) eventually revealed. We’ll never know.

And now, a word from our sponsors: