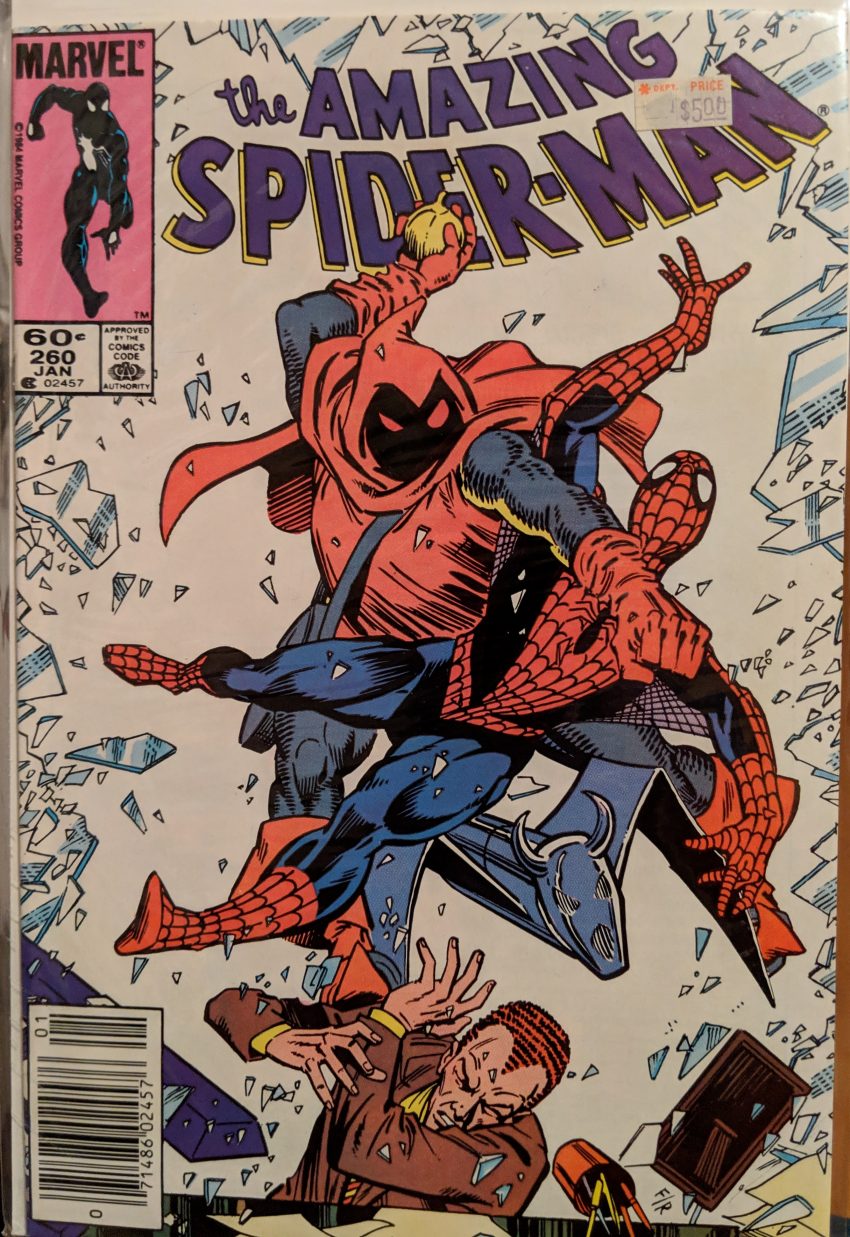 Where’s the light coming from on the bottom of Hobby’s arm? My oft-mentioned “The Saga of the Alien Costume” trade ended with ASM 259, because Spidey was out of the alien costume, obviously. This left lil’ 6th grade me on a cliffhanger! What about The Hobgoblin?? But I was in high school before I found & bought this copy of 260 to finally see what happened. Pretty exciting at the time, I can tell you. Let’s see how it feels today. It opens with one of Aunt May’s boarders, Arthur, trying seeing her troubled and telling her to make up with Peter. She says he’s always wanted a career in science, and it was his responsibility to finish college (ooo, loaded word in this comic). Arthur asks if she doesn’t owe it to him to at least hear his side of the story. We don’t get her answer, though, before cutting to Spider-Man roughing up a room full of dudes. Things are going his way until one of his webshooters jams and backfires.

Right away, this is a very Steve Ditko fight sequence. We come to know this is one of the gambling dens Hobgoblin invaded last issue, and Spidey knows it, and wants some info about him. He says that all happened a week ago! Spidey went barreling out of his place at top speed to take down The Hobgoblin last issue, and then… what, went to lunch instead? Anyway, Santellio the bookie says Hobgoblin doesn’t collect his protection money himself, and that The Rose’s goons do it. So now Spidey has that connection to work. Thinking his webshooter must’ve malfunctioned because he’s not had to use them lately, Spidey spends 2 pages swinging around recapping recent events, like the deal with his suit, with MJ, with Aunt May, with Black Cat, who Hobgoblin is, etc. It’s a real info dump. He says he’s got to find Hobby, but he doesn’t even know where to look.

As Hobgoblin flies off, The Rose’s goon, Mr. Johnson, asks how long they have to put up with this, and The Rose says as soon as they’ve taken over organized crime in the city, they’ll kill him. One… certainly wonders how he’d do that, but anyway. Elsewhere in town, Mary Jane is on her way to meet Harry & Liz Osborn.

Uh-oh! Harry Osborn & Liz Allen got married since our last time jump, and now they’re about to have a kid. We cut from them to The Baxter Building, where Spidey’s alien costume may no longer be attached to him, but it’s not out of the book yet. When young Franklin Richards chases a ball into the room it’s being held in, it tries to form a mental bond with him. But when it senses the absurd level of power locked away in Franklin’s brain, it becomes afraid of him and retreats. It’s not going anywhere… for now. Elsewhere, Harry Osborn has arrived back at work at Osborn Industries, and he’s worried. The company’s in trouble, and someone’s been buying up a lot of stock through dummy companies.

Good thing he knew what floor to smash into! Hobby believes that, while his copies of Norman Osborn’s journals were destroyed in his last battle with Spider-Man, surely other copies exist, and he obviously wants them pretty bad. Harry says he has no idea what The Goblin is talking about, but The Goblin’s not into that. Lucky for Harry, Spider-Man comes through the window.

Turns out the room with the glass partition is a conference room (Seems more likely!). Hobgoblin tries to escape out a window, but Spider-Man keeps him corralled inside, and makes him mad enough to stick around and fight.

Hmmm. Why isn’t Ned Leeds home? Is he the Hobgoblin!? Why is Ann’s hair suddenly black? Further down the same page, Robbie wonders why he can’t get ahold of Lance Bannon or Peter Parker. Is Peter Parker The Hobgoblin!? Oh wait, nevermind that one. So many suspects, and there’s only more coming as this story goes on (for too long, frankly). Back at Osborn Industries…

This actually is a pretty demeaning way to lose a fight, Hobby’s right. He manages to get away and smash out a window, and Spidey gets a web on the bottom of his glider, so it’s time for a bit of the classic “a flying villain drags Spider-Man all over town” bit, until he gets him in range of a train rushing by and…

Holy crap, Spider-Man is dead and we still got 3 more pages! A car full of goons pulls up, intent on kidnapping Liz. MJ puts up such a fight that they decide to just take her, too. Harry sees the whole thing from down the street, frantically pushing his way through foot traffic, only to get clocked by a goon who says Hobgoblin sends his regards.

The son of The Green Goblin! Also, Spider-Man’s not actually dead, I was just kidding. He managed to stick to the train and not die.

We better hope not, nobody wants two Goblins flying around. A couple of non-story points of interest in this one. First, there’s an ad for The Marvel Try-Out Book, one of Jim Shooter’s most unusual ideas. It was a Spider-Man comic with various unfinished pieces, and you could try your hand at your preferred craft and send it in to, well, try out. Penciler, inker, writer, letterer, you could try it all. And someone really did snag a comics career out of it: Mark Bagley, who would go on to be one of the artist most associated with Spider-Man! So this month, Bags sort of began his journey to the comic biz, and to his upcoming appearances on this blog. That’s pretty cool. Also this month… uh, this:

Yes, our good friend John Romita, Jr. was Marvel’s first– and, as it happens last– Hunk of the Month. I guess this is as good a place as any to mention the next chunk of ASM is stuff I’ve read just last year, in an Epic Collection called “Ghosts of the Past.” I bought it more than a year prior, in an attempt to fill in the story, since I was missing most issues from ASM 260 up to the 290s. Then I grabbed up everything after that trade at the beginning of the Great Ebay Hysteria of 2018, and read all of it before I thought about making this blog. So the stories in ASM, at least, from here through 294 are all relatively fresh in my mind, actually. Too bad for me I wasn’t thinking about doing this yet, I could have years of ASM done. Ah, well.