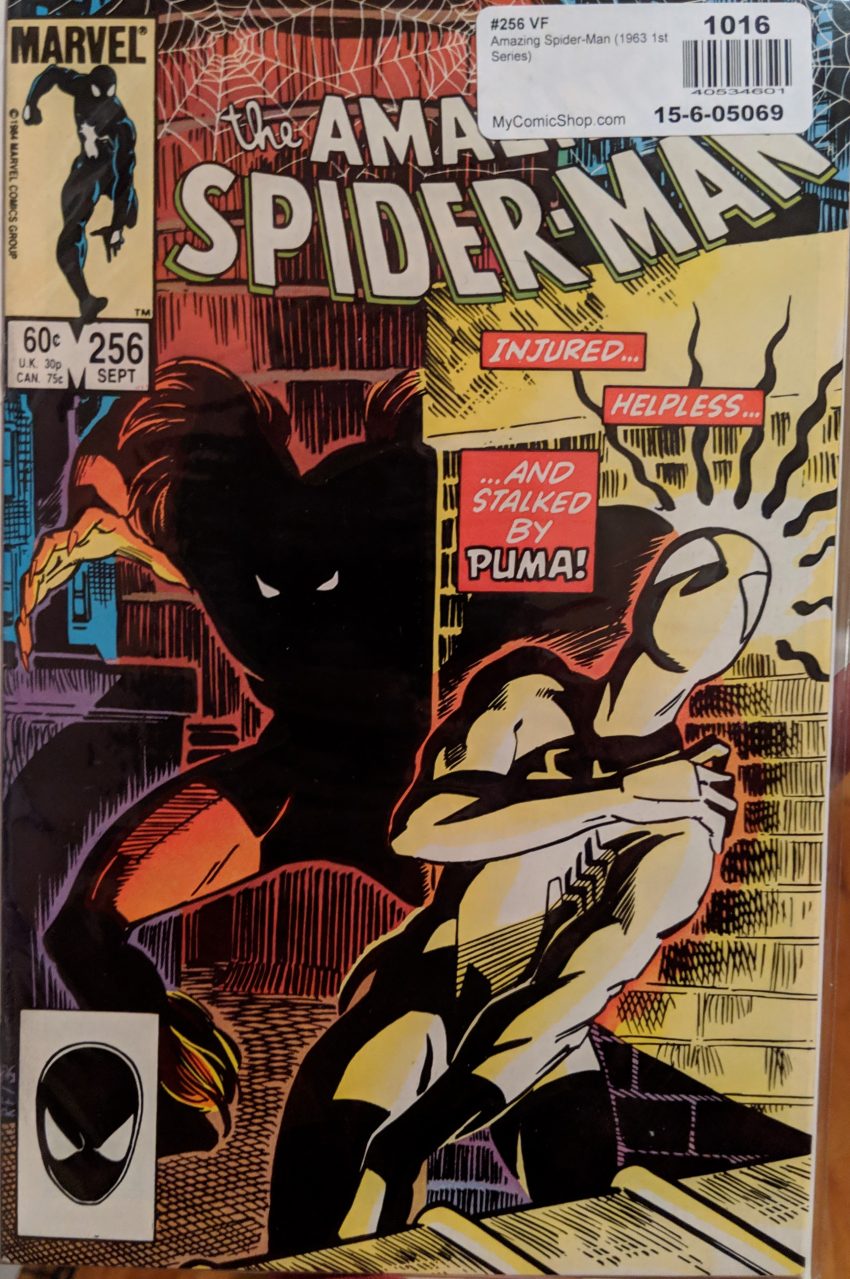 It’s the possibly thrilling debut of The Puma. Puma is… complicated. He was a pretty major player when I came on the scene as a kid, but… We’ll just get into it. Spideys busting up some dudes receiving stolen goods in a warehouse, as Black Cat, making a surprisingly rare appearance in ASM, takes pictures of him doing it.

Here’s the thing: Black Cat pretty clearly already had “bad luck power” in her first appearances. I realize we’ve not covered that on the blog yet, but trust me on this. In ASM 194-195 and ASM 204-205, Marv Wolfman had bad luck happening to anyone who got in her way (As she endlessly told people it’s bad luck to let a black cat cross your path. I mean, nonstop). They never SAID she had powers, but they went out of their way to show that she did. Then new writers got involved, suddenly she didn’t. Now she does! That’s a weird journey. It’s also weird that most of her story is unfolding in Spectacular. ASM has always been considered the “real” Spider-Man book, and yet as you’ve seen, she’s not been much of a going concern here in spite of being, as a previous caption in this issue said, his “true love.” ANYWAY. Spidey keeps whupping on the various goons, until it looks like he might be in trouble, so even though she knows he can handle it, Felicia takes the excuse to jump in herself. Not that he minds.

This is exactly the kind of thing that happened to people in her early days. Anyway, a guy tries to shoot her and his gun blows up in his hand an she knocks him out, so that’s it for these guys. Spidey webs them all up and they take off, Spidey still fretting that this is too dangerous for her.

Back home, Peter complains that he’s always tired these days while developing his film, then complains that Felicia is clearly a better photographer than he is (Is he, like, factoring in that his “work” is usually done by a camera stuck in a corner by itself? “I can’t believe a person can frame a shot better than a camera webbed in a dark corner!”). Then he accidentally knocks some stuff off a shelf in his closet and finds his old spare costume, sending him on a brief nostalgia trip before bed (Mostly so Ron Frenz could draw the old suit, seems like). Once again, as Peter goes to bed, his costume slithers across the floor towards him. This seems bad! Especially since, later in the evening we see a couple of bickering homeless guys get scared but what appears to be Spider-Man swinging by. Hmmmmm. The next day, we check in with The Rose…

Suddenly we’re in Heartsdale, New Mexico, home of Fireheart Enterprises, whose mysterious leader Thomas Fireheart is ditching a meeting with the mayor and a Congressman. His assistant, Jenna, sees a call on his private line. It’s The Rose. She doesn’t know who that is, so she transfers it to… a helicopter 60 miles away.

Puma apparently kills his prey in 6 minutes, then returns to the helicopter to find Jenna’s message.

So, right? He’s like a Native American Batman, only he’s a were-cat, and apparently hangs out with bad guys like The Rose. On the other side of the country, Peter brings Felicia’s photos to Robbie, who says his technique is improving (That’s gotta hurt), but people have seen plenty of pictures of Spidey wailing on goons, and he’s only buying these for the novelty of the new suit. Robbie’s a lot harder to please than JJJ was. Which is almost funny considering how often he bent the rules and even made up fake assignments to help Peter in the past. A visibly exhausted Peter goes to Betty Brant for his check, and talks for a sec about how things are still sour between him & Aunt May, when a surprise visitor appears:

We haven’t seen Marvelous Mary Jane for awhile around here. She invites Peter to join her & Betty for dinner, but he declines and takes off. Betty says she has some theories about what’s troubling him, and MJ says she’d love to hear them. Meanwhile, Thomas Fireheart’s private jet lands in New York, and soon he’s meeting with The Rose.

The Rose’s top goons, Varley & Johnston, wait outside the room for Fireheart to change, and when he never comes out, they go in and find he’s gone out the window, even though “the nearest rooftop’s gotta be forty feet away!”

Puma soon picks up Spidey’s scent and heads out after him, and while Spider-Man contemplates how to make things right with Aunt May, Puma decides he doesn’t look like much and tests him by tossing a pipe at him super fast.

Spidey’s pretty sure he’s dislocated his shoulder, and is in immense pain.

Well, that doesn’t look good for our man. Will he survive? I mean, probably! The Puma… it will become apparent in later appearances that Tom Defalco made up his own Native American tribe with zero research, and it’s all very awkward. Right now it’s just somewhat awkward, but it’s gonna ramp up. And like I said, this guy is gonna be a recurring figure for a long while. I dunno.

In the letter column, we’re still on ASM 250. I’m eager to get to reactions about the suit. But people are already pretty excited about trying to guess who The Hobgoblin is. By now, ASM has had them guessing for almost 20 issues. Little do they know what they’re getting into…