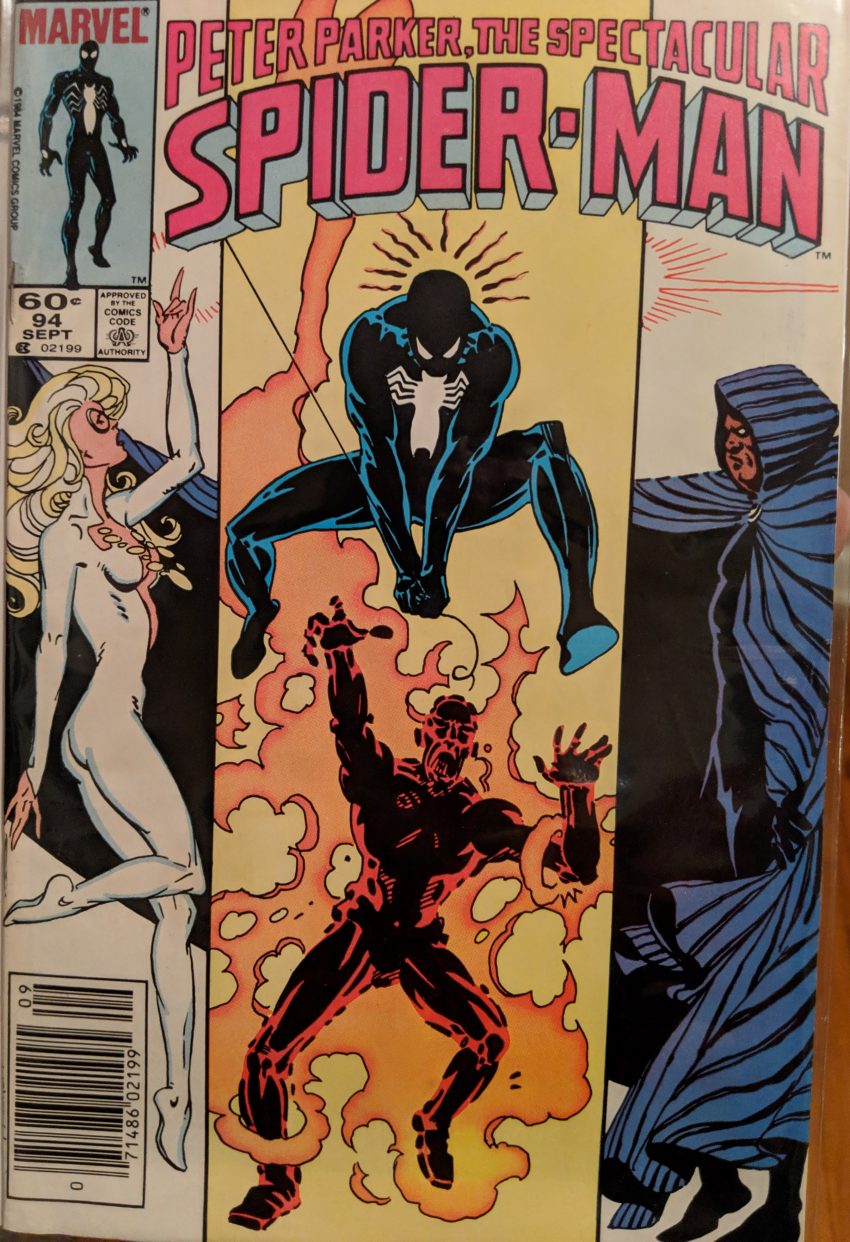 This one’s called “How Ya Gonna Keep ‘Em Down At The Morgue After They’ve Seen NYC?” That’s too specific not to be a reference. Wikipedia sez there’s a 100-year old folk song called “How Ya Gonna Keep ‘Em Down On The Farm (After They’ve Seen Paree)?” that has seen popularity sung by various people over the decades. Part of it was apparently sung in The LEGO Movie, even. Aaaaaalright. Never heard it. Hey, how about some Spider-Man comics? Cloak & Dagger are back, and frankly, after their last appearance, I am not excited. We begin in a halfhearted Kirby laboratory with The Answer having something done to that dead guy, telling Kingpin he’ll soon have an assassin worthy of him.

Now here’s a couple of guys talking like they’re trying to keep an audience in suspense. Kingpin instructs the guys in the background to being phase two, and a blinding light fills the room. Kingpin’s having a great time until he thinks of his long-suffering wife, Vanessa, once again sick beyond his capacity to help, because that’s what she does in comics. He only has a second to be sad, though, as their Frankenstein begins to stir amidst all the Kirby Krackle. Kingpin says he’s been too focused on Spider-Man and Black Cat lately, and having this undead assassin will be good for business elsewhere. Then we cut to Cloak & Dagger, so the reveal will have to wait. They’ve just teleported into a drug deal, already in progress. But Dagger falls down, saying it feels like some of her light was just stolen.

That is the wrong thing to say to these two. Cloak envelopes all present but Dagger in his cloak, reveling in the feeling of “his darkness feeding.” These two are weird.

They teleport out to go try to figure out what’s wrong with Dagger, and then we cut to the next day, and finally check in with our hero. Peter Parker is walking down the street brooding about how bad his life is right now. You know, the usual. He’s on his way to a lunch meeting with Harry, Liz, and Sha Shan. She’s called them all together, and it’s not hard to guess why. Peter suggested this BBQ place.

Wah wah waaaaaaaah. But while Peter’s outburst was insensitive, Harry immediately standing up, saying Flash is a big boy and he’s got his own problems, and then leaving is way worse! Liz is like, “Oh, yeah, bye!” and soon it’s just Peter trying to comfort Sha Shan by… talking about how Flash used to beat him up in high school, these guys are terrible friends!! Outside, as Harry & Liz walk away, Flash comes up, fuming. He found out Sha Shan didn’t go to class (Somehow?) and found a piece of paper with the address to this restaurant in the trash (Why didn’t she bring it with her), and, well…

Why are Peter & Flash both dressed like they’re still in high school for this scene? Quick cutaway to the The Answer putting a “submission collar” on the still-unseen zombie so it will have to obey Kingpin’s commands or feel terrible pain, then back to Peter. He’s just arrived home to find Mrs. Muggins eavesdropping at his door, so he uses his Spider powers to sneak up behind her and tap her on the shoulder. She gets flustered and runs off, leaving Peter to call Felicia to try to patch things up.

That last panel is hilarious. As Spidey swings off, the whole continuity thing goes in the other direction, Spidey’s internal monologue referencing recent events in TAC and MTU and ignoring ASM for some reason. He stops at a flower shop to grab some flowers to help save his dysfunctional relationship when a terrified guy comes running into the tables outside the show.

Spidey rushes past the dude to go fight whatever’s behind door number 1, finding a pile of goons between him and it, and when he gets there, he’s in for a shock, as we finally see who Kingpin has reanimated: Silvermane. Spidey recaps what happened in TAC 70 real quick and then…

My weird reading order had actually worked out pretty nicely here, since we saw Silvermane become a robot in the last set. Spidey battles the reanimated corpse of Silvermane while slowly getting an inkling that he’s not all there, while The Answer broadcasts the fight to Kingpin. He didn’t want this to happen, but figures Spidey is a better test for his zombie than those goons. Silvermane topples a bus, and Spidey dives in to stop it from crushing some pedestrians. Unfortunately, this gives Silvermane a chance to grab him by the ankle.

Kingpin tells his lackeys to make Silvermane release Spidey, but he’s not responding. Then…

Things are looking grim! Come back next time for more of this, and also to see the timeline begin to collapse.

This issue had an ad for the previous issue in it. I don’t think I’ve ever seen that before in all my years of reading comics.