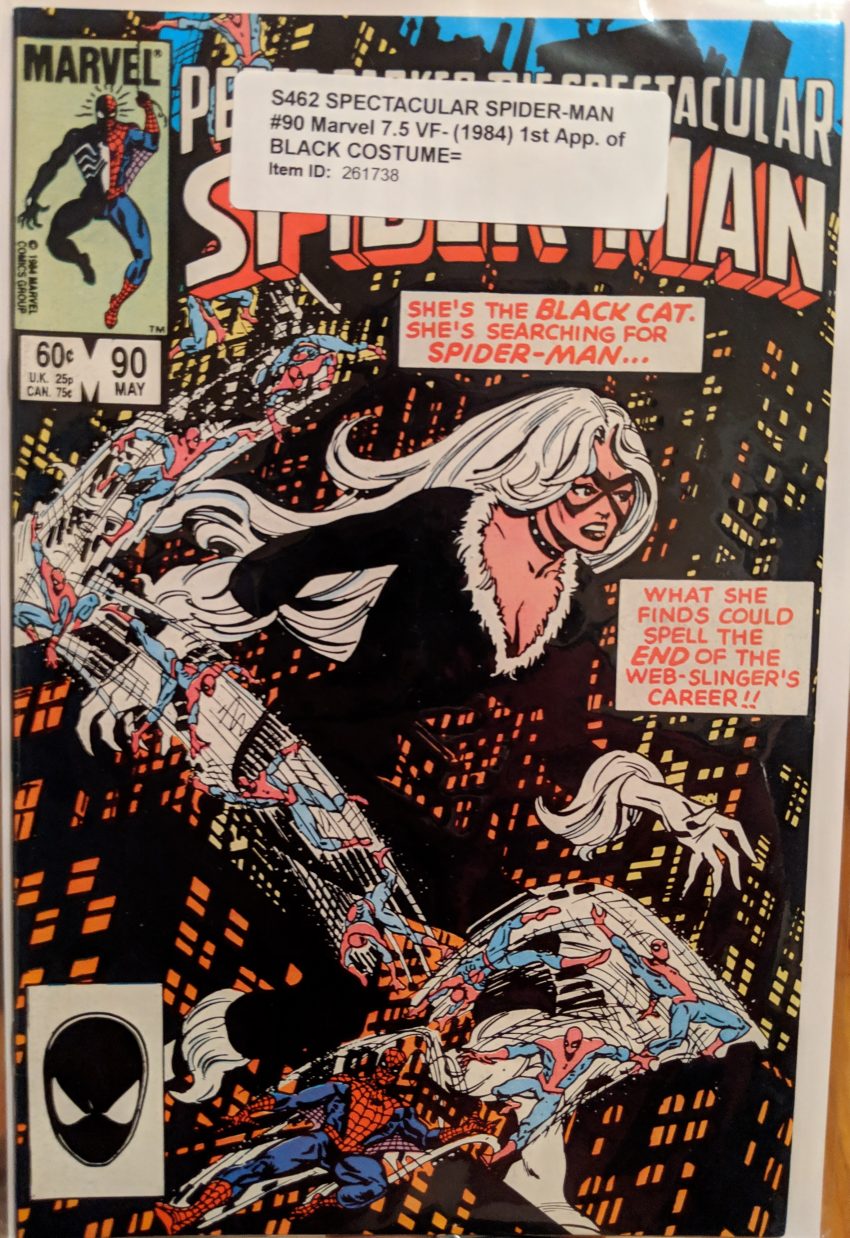 Alright, we’ve seen two of the regular Spider-titles introduce the new suit, let’s see how Tac does it. Interesting that he’s not wearing it on the cover, unlike the other two. Al Milgrom writes and draws this one, with inks by Jim Mooney and colors by Bob Sharen. As the cover suggests, we follow the Black Cat, swinging across the city and feeling freaked out. She briefly recaps the previous issue, in which, after being more of a liability than a help to Spider-Man in recent fights, Felicia went on a (rather weird) quest to get superpowers, accepted help from a shady source, got superpowers, and then found out The Kingpin was behind it. They made a bargain:

She’s really losing it, this was a bad time for Spidey to get yanked into another dimension. She drops down to street level, thinking a walk might help her clear her head, and in no time at all, is being followed by no less than five ridiculous looking thugs. I mean ridiculous!

They look like a Funkadelic cover band from a town no one lives in. Weirdly, though, they have regular dude names instead of comic book goon names (I mean, sort of) like Mikey and Nickey (With an “e”) and… and Elroy. Anyway, they try to attack her, but she’s got superhuman strength and speed now, in addition to a “bad luck” power that makes people trying to bother her have accidents, so things don’t go as they expect them to.

Many posts ago, I said my new answer for “what superpower would you want?” was The Basilisk’s “can do anything” eye beams, but this bad luck stuff looks pretty entertaining. Buoyed by her victory over Earth, Wind & Fire, Felicia starts psyching herself up, thinking Spider-Man will be relieved that she has powers, and she doesn’t have to tell him where they came from, and if the Kingpin calls in his marker, she just won’t do it, because who could harm her now, anyway? She’s got it all figured out. She swings by Peter’s apartment, like in ASM 252, except nothing like ASM 252, it’s a totally different scene, where she’s mostly internal monologuing about what a dump his place is, and then she leaves a note! Surely he would’ve noticed said note when he came back in ASM. Anyway, then she just walks out the front door, right into the landlady, Mrs. Muggins, who is extremely Mrs. Muggins about it. Felicia doesn’t even say a word to her as she walks up to the roof and leaves. Then she decides maybe she can find out where Spidey is from Jean DeWolff, and heads to her office. All these people being around late at night sure is convenient.

This is the weirdest love triangle in the history of Spider-Man comics. A vigilante, a cop, and a reformed cat burglar. Anyway, that dingus Manello pulls his gun on Felicia, bumps into a filing cabinet and falls down, and Felicia is off. Now she thinks maybe she shouldn’t tell Spidey about her powers. But if she doesn’t, he’ll certainly notice soon enough. The next stop on the “Where’s Spider-Man?” tour is The Daily Bugle. Felicia is… not being too careful with his secret, here. For some reason, everyone’s working late, and Felicia causes a commotion that soon leads to JJJ getting in her face and Robbie having to make an excuse to break it up.

Not getting any new info, Black Cat departs. So far, she’s crapped on Peter’s apartment, straight up said she hates thinking of him as Peter Parker, and has now swung off thinking to herself that The Bugle is “a nothing place to work” and he could do better. This is a very healthy relationship, guys. Next stop on the tour: Avengers Mansion, where Vision & Scarlet Witch are hanging around, having been excluded from the fun of Secret Wars. Cat shorts out all the mansion’s defense mechanisms, but Scarlet Witch does probability altering, too, so she can snag her. She explains herself, and they say they don’t know where Spidey or their teammates are. Vision then pretty casually asks if she wants to join the team. Felicia says they could never bring on a former crook like herself, so Vision does a quick rundown of the copious amount of ex-supervillains who’ve served on the team.

Well, as you could certainly guess, Vision’s pep talk which was oddly specific to Felicia’s exact situation has her back to thinking she should tell Spidey about her powers as she… goes to Aunt May’s house. Since our last time jump, Aunt May and Nathan have moved back to Peter’s childhood home, and made it a boarding house full of old people. This is not a good idea, come on, Felicia! And of all things, she decides to just crawl in a window, terrifying one of the residents. Soon the whole house is confronting her.

Sheeeesh! She exits thinking Aunt May is a drag, so no wonder Spidey is “such a yuch” out of costume (Wedding bells definitely imminent!). And then a voice asks what she’s doing here.

No Spidey ‘til the last page! The other series both tried to give you all the info you needed, but this one was just like “Go buy Secret Wars!”

Due to some problems that will be apparent next issue, I have had to conclude this one takes place after ASM 253 in spite of being published before it. The timeline just doesn’t add up, and is going to be impossible to reconcile for the next several months, anyway, mostly because of this very title. We shall see.