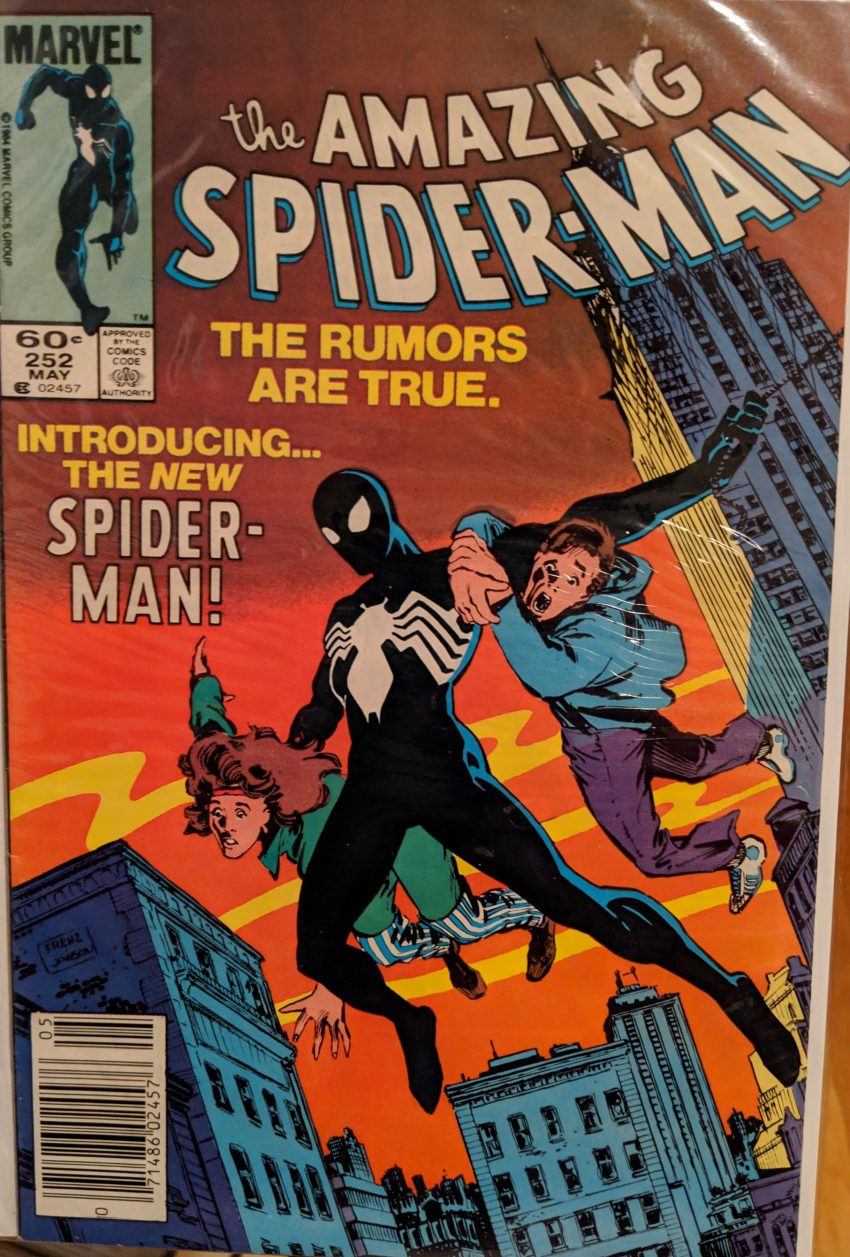 I first read this issue as part of “The Saga of the Alien Costume,” a trade paperback collection I got when I was a wee lad in the 6th grade. So I’ve read ASM 252-259 before, but never read the issues of Team-Up or Spectacular published around them. Additionally, never had an original copy of this highly sought after issue until The Great Ebay Hysteria of 2018. This was the most expensive book I got at $53, but for the condition it’s in, that’s actually a steal. I’m not even sure how I got away with it.

While ASM 251 was technically the new team’s debut, it tied up loose ends from Stern & Romita’s abrupt departure from the book, with the team working from a plot by Stern to finish up his last Hobgoblin story. This one also features a plot by Stern, but is a pretty clean start for Tom Defalco & Ron Frenz to do their own thing. First, though, they gotta bring Spidey back from Secret Wars.

Secret Wars was Marvel’s first big summer event (All pictures are from a 2000s-era trade), written by Editor-in-Chief Jim Shooter himself, with pencils (mostly) by star artist Mike Zeck. All the biggest heroes and villains were transported to an alien planet by an unseen, seemingly all-powerful force called The Beyonder, who demanded they fight each other. This was because a toy company wanted to make Marvel Super Heroes toys, and asked for a publishing initiative to tie into. While it was a major event in the Marvel publishing line, a huge financial success, the beginning of a practice that continues to this day,  and a big deal to see all those characters in one place, it wasn’t too great, honestly. The heroes & villains fought back and forth, some new heroes & villains were created, Magneto & The Wasp had a brief romance (???), Dr. Doom did what he always does and tried to steal The Beyonder’s powers, and then the good guys won and almost everyone went home (Ben Grimm chose to stay on “Battleworld,” but that’s none of our concern). One of those new heroes was a new Spider-Woman, who just, like, showed up.

In the midst of all the fightin’, Spider-Man’s costume was torn up. And then…

He concludes he must’ve been thinking of the new Spider-Woman’s suit. Thus, when Spidey returns to Earth, he’s in the now-famous black & white suit.

(That melodramatic caption has always cracked me up) The thing is, as you can see in the screenshots, Secret Wars, a 12-issue series, began the month everyone came back from Secret Wars. They couldn’t just put all the books on hold for a year, so everyone went into the portals last month, and everyone came home this month, but the story is just starting, and all the consequences of the story appeared in the comics before anyone saw what caused them. Awkward. Thus, Spider-Man was portrayed coming back from Battleworld in the suit eight months before anyone saw how he got it in Secret Wars. This month’s issues of ASM, TAC & MTU were its debut, and since ASM is the Cadillac of superhero comics, this is the true first appearance of the suit. With all that out of the way, we can get started. Plot by Stern, Script by Defalco, breakdowns by Frenz, finishes by Brett Breeding, colors by Glynis Wein.

We open on The Daily Bugle. The paper, not the building. The headline asks “WHERE ARE THEY?!?” regarding all the missing superheroes. Maybe too much punctuation. JJJ is kinda critiquing the issue out loud to Robbie.

Naturally. Robbie reminds him (And us) that he’s the Editor-in-Chief now, and JJJ is just the publisher, so he’ll run the paper as he sees fit. But he does wonder what happened to Spidey and all the missing heroes. Good timing on that, because at that moment, the strange structure that appeared in Central Park and kidnapped everybody reappears, and out of it leaps…

Spidey asks one of the onlookers if Curt Connors can have a drink from his thermos (You don’t even know what’s in there!) because they’ve been traveling a long time, and then the realization that they’re really home sets in, and he starts leaping for joy.

He’s really happy! Now the Avengers are back, he & Connors make a quick retreat, Spider-Man worrying someone will get a photo of Curt. Connors asks what they’re going to tell the world about what they’ve been through, and Spidey suggests they keep it all to themselves, while also trying hard to get you to buy Secret Wars. A distance away, Spider-Man stops and roots around in a tree for his normal clothes, left behind last issue, and…

Weird. Also, kinda weird to zoom in on Spidey’s crotch. He scoops up Connors and drops him off with his worried family before swinging on home to his place.

This could save you a lot of money on clothes. Peter suddenly realizes it’s been over a week since he talked to Aunt May, so he gives her a call. She’s fine, of course. She’s still got Nathan Lubinsky in her life, and they’re doing good. Peter arranges to come over for Sunday dinner and then hangs up to try to call Black Cat, but she’s not home. He thinks it’s time they finally figured out their weird relationship.

Yikes! That can’t be good. Black Cat worries Kingpin is going to try to use her against Spidey, and she wants to warn him. As she takes off, Peter returns home carrying a pizza. Later, he remembers he took pictures while he was on Battleworld. At his thought, the costume pops his camera out, which is pretty weird. He goes to develop the photos, thinking they could be worth a fortune.

Peter tries to go to sleep, but he’s still way too freaked out from his adventures, so he thinks he’ll do what he always does in this situation and go out for a swing. Except this time…

This is a weird way to live. He does his thing, stopping a mugging, terrifying both mugger and muggee in his new dark suit, and then goes flipping and jumping all over the city, just happy to be alive for once. Eventually, he stumbles on a couple of teenagers having a heated argument.

Justin tells him to look around at the neighborhood, that they have nothing going for them, and Spidey wants to prove them wrong. And he does so the only way he knows how:

He takes them up onto a skyscraper to show them the city from his angle: the good, the bad, the whole thing. He tells them it’s a part of them, and it’s up to them what to do with it, and that’s what they’ve got going for them. Then he takes them back where he found them.

And that’s that. An unusual issue. The closest thing to a relaunch the series could get, at this point. So begins, as my book was called, The Saga of the Alien Costume. Brett Breeding really did some good work here. I guess Frenz was spread thin doing this and MTU 140 (Next issue of ASM is a fill-in), but Breeding doing finishes instead of just inks makes Frenz look much better than he usually does. Spidey’s weird pinhead and bizarrely upturned eyes in that 2nd-to-last page are the only obvious traces of Frenz in the whole book. Meanwhile, in the letter page people are reacting to Roger Stern bringing Mary Jane back after years out of the book. Including this guy:

(Nice typo) Chill out, Jason, jeez. His specific complaints about her appearance crack me up considering every woman in the Marvel Universe has the same model figure, and most of them have basically the same hair & face. Try telling MJ & Jean Grey apart in the 60s & 70s, ya know? . I guess he just doesn’t like dimples. Or he’s a crazy person. Or both. To wrap up, just for fun, here’s my old trade I’ve had since I was in elementary school with its lovely John Romita, Sr. cover: